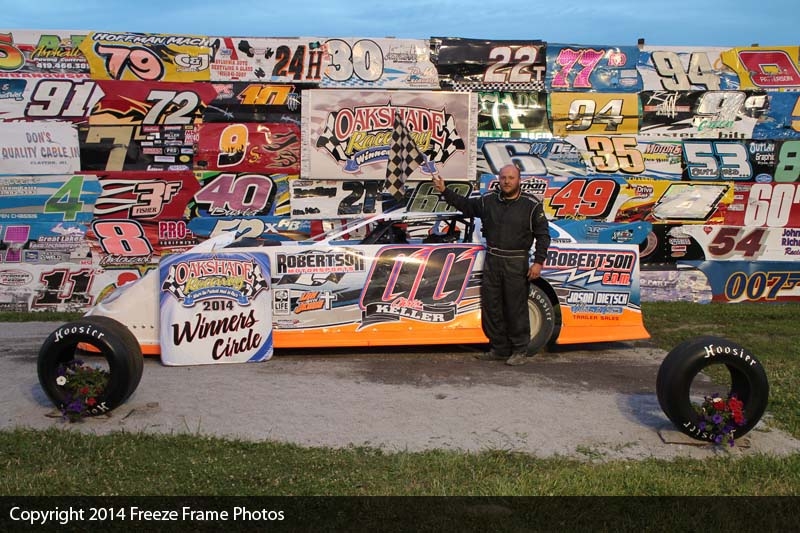 Chris Keller picked up his first feature win of the year on Memorial Night at Oakshade Raceway.

Matt Miller passed for the lead on a three-wide move at the start of the UMP Late Model feature race and proceeded to pull away to a half track advantage over Tim Sabo. Everything changed on lap 17 when the yellow came out for Amy Clair who slammed hard into one of the large tires that separates the racing surface from the infield. At the same time, Sabo gave up second place and retired to the pits. Jeff Babcock also suffered a set back cutting down a right rear tire. He had to relinquish fourth place to have it attended to in the pits. After all that, Miller led Steve Kester and Chris Keller back to the green flag. Keller got by Kester and then Miller spun in turn four after some contact with Keller which brought out another yellow flag. When the running order was reset, Kester was the leader with Keller second for the restart. The two drivers raced side by side for the lead with Keller eventually taking command a couple laps later. Brian Ruhlman worked his way into contention late in the race to challenge Keller for the lead, but Keller held on to take the checkered flag. Ruhlman settled for second, but took over the Oakshade Late Model point lead. Last week’s feature winner, Casey Noonan, finished third with Kester dropping back to end up fourth. Rusty Schlenk finished fifth and fell 6 points behind Ruhlman in the point standings.

Jamie Grochowski led the first lap of the Memorial Night Sportsman feature event until Mike Jessen took over on lap two. Multiple caution flags kept the field from getting too strung out and Jessen continued to lead until there were less than five laps remaining when Tim Line joined the battle. Line jumped to the outside and after some side by side dueling, Line got the lead by a nose on lap 15. Two laps later, Jessen fought back on the inside to reclaim the lead, but Line was back in front with two laps to go. Line survived a close call with Brad Johnson whose car came to stop right in front of the leader and won his fourth feature of the year. Jessen took second followed by Jamie Grochowski, Bruce Stuart and Drew Smith.

Jeff Foks led the entire distance of the Bomber A Main and pocketed all the Memorial Night lap sponsorship money in doing so. Mathew Chapman was running second early in the race and spun in turn four to bring out one of the early caution periods. The winner of the last two Bomber A Mains, Chris Sands, took over second and had a great race with Foks for the lead. They raced side by side much of the race with Sands working the inside while Foks stayed high. In the end, Foks was able to put a little distance on Sands to earn his fifth A Main win of the year. Sands finished second. Craig Dippman was third followed by Curt Dickie and Jim Remley who rounded out the rest of the top five finishers.

John Martis continued his recent domination in the Best Performance Motorsports Compacts with his third consecutive feature win. That victory helped close him to within 27 points of Brandon Myers for the point lead. Myers second place finish kept Martis from gaining too much ground on that point lead. Cody Stetten finished third followed by Aaron Barrick and Cory Gumm.

Tim McNicol took the early lead in the Bomber B Main until Tim Murphy got around by lap three. Adam Lantz moved into second and challenged Murphy for the lead most of the race. A late caution for Joe Rozek’s spin set up a one lap race to the finish. Murphy got a good restart and was able to pick up the win with Lantz settling for second. Ted Hill and Pete Herman were penalized for jumping the last restart which gave Scott Hammer a third place finish. Ted Hill was credited with a fourth place finish with Tim McNicol fifth.

Next Saturday Oakshade Raceway will feature another full racing program of UMP Late Models, Sportsmen, Bombers and Best Performance Motorsports Compacts. In addition, the Vintage American Race Car group will be on hand for some old school racing. All the action starts at 7pm. Gates open at 4pm. 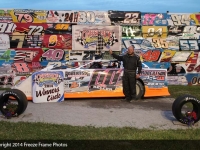 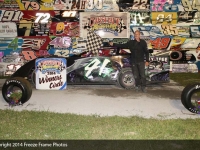 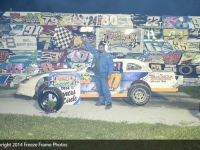 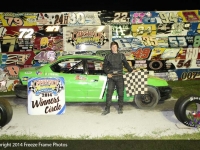 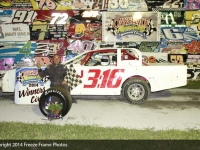