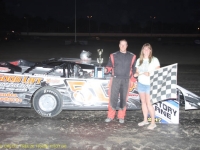 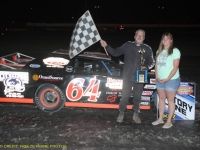 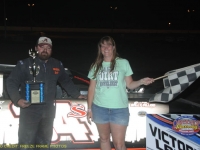 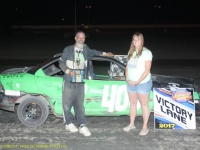 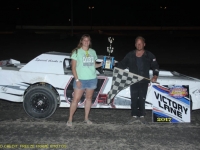 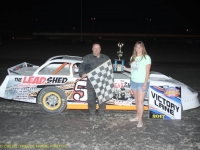 Shiels started 11th in the 25-lap main event and began picking off positions one by one. It was defending track champion Brian Ruhlman who led the early laps with Rusty Schlenk closing in. Schlenk, who was trying for his third consecutive feature win at Oakshade, snatched the lead away on lap 11, but by lap 15, Shiels was knocking on the door. After a lap 16 caution, the two drivers had an epic battle for the lead. Shiels led lap 17, but Schlenk regrouped and reclaimed the top spot on lap 20. Shiels was back on top one lap later and held on to pick up the victory. Schlenk settled for second with Ruhlman third. Steve Kester finished fourth with Mathew Chapman ending up fifth after starting 12th.

Action screeched to a halt early in the UMP Sportsmans feature. A wreck that included Chane Stuckey barrell rolling in the middle of a huge pile up on the second lap brought out the red flag. Also caught up in the mishap were Karl Spoores, Ethan Gehring, Brandon Gregory, Bob Krumm, Christopher Whitlock and Josh Robertson. Rusty Smith out of Sylvania, Ohio, quickly took over the race lead and never gave it up despite more caution periods that kept the field tight. George Lindsey and Mike Jessen put the pressure on for the lead, but Smith fended them off and took the checkered flag. Lindsey and Jessen finished second and third respectively. Chris Williams had a good finish in fourth after starting ninth. Drew Smith, winner of the first two UMP Sportsman features this season, ended up fifth.

The Bomber A Main featured a great battle for the lead down the stretch. Dean Taylor took the initial lead after starting on the pole, but Rich Riffe from Toledo, Ohio, took it away on lap five. Jeff Foks Jr. then closed in and raced side by side with Riffe a few laps, eventually taking the lead on lap 11. Riffe fought back and got the lead back one lap later. Dave “Gumby” Golembiewski and Craig Dippman later joined in the fray for the lead. An elated Riffe was able to hang on and pick up the victory. Golembieski took second followed by Foks and Dippman. Tim Hancock rounded out the top five finishers.

The Compact feature event turned out to be the Brogan Rehklau show. The Waldron, Michigan driver started on the pole and led flag to flag, but Jeff Foks Sr. made him earn it. Foks managed to get up alongside Rehklau to challenge for the lead with two laps to go. Rehklau was too strong and went on to win his second consecutive Compact feature win at Oakshade. Jason Deshler finished third behind Foks. Clinton Urban and Matt Brazeau made up the rest of the top five finishers.

Dylan Burt took command of the Bomber B Main after passing Cody Laney for the lead on the first lap. Laney fought back and reclaimed the lead on lap three. Wauseon, Ohio’s Willam Cundick charged his way to the front and took the lead away on lap seven. Burt fought back and took the lead from Cundick with one lap to go. The two drivers raced side by side with Cundick narrowly coming out on top at the checkered flag. Laney finished third followed by Dave McMannamy and Gabe Mueller.

Steve Reeves car burst into flames on the backstretch on the first lap of the Bomber C Main. That brought out a red flag and ended his night prematurely. Justin Gamber got by Josh Overmeir early for the lead. Once he made the pass, Gamber was gone and picked up the easy victory over Overmeir, Brenen Mellon, Matt Koerner and Derek Zuver. 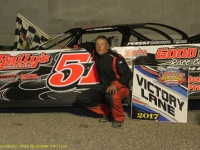 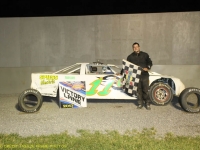 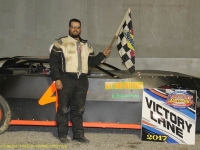 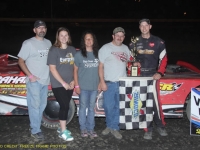 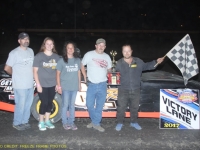 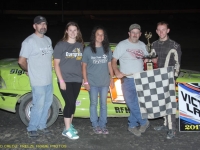