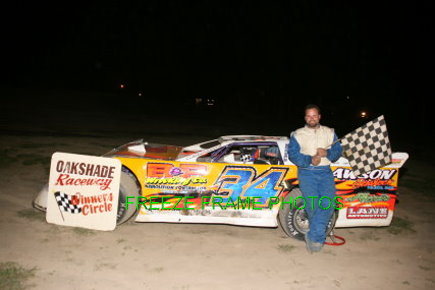 Three-time Oakshade Raceway Late Model Track Champion Justin Paxton was back in championship form Saturday night with an impressive victory in the UMP Late Model Feature at Oakshade after not making the main event the week before.

Aaron Scott closed in on Brad Eitniear for the lead early in the 25-lap UMP Late Model Feature until Scott slipped up high in turns one and two and fell back to fifth on lap seven.

Paxton started on the outside of the third row and just after Scott’s slip up, Paxton darted to the outside of Eitniear for the lead and then drove away.

Eitniear, Ronnie Perrine, Jr., Rick Delong, Casey Noonan and Aaron Scott then engaged in a great battle for the second through sixth positions as Paxton continued to pull away with the lead. Eventually Perrine and Delong emerged as the two drivers vying for the second position almost a half track behind Paxton.

Paxton put the bad luck from the previous week behind him by picking up the victory uncontested in the caution-free feature.

Chris Smith had a run of five consecutive Sportsman track championships from 1998 to 2002 and was also back in championship form leading the UMP Sportsman Feature from start to finish.

Mike Jessen ran second most of the race and was able to mount a challenge on Smith just before the halfway point in the race. Jessen got to the inside and actually led lap nine by a nose before settling back behind the 94 car of Chris Smith.

Josh Steinacker moved up to third by lap 13 and then pressured Jessen for second in the remaining laps of the race right behind Smith.

Smith went on to pick up the victory with an exciting race for second just behind him with Steinacker edging out Jessen at the line to finish second for the second week in a row.

With Chris Henry leading early in the UMP Bomber A Main, Harold Rieger was in second and then spun in turn two on the second lap collecting the 74D of Craig Dippman. Both cars were able to continue but had to restart at the tail of the field.

Gary Cole was flying up through the field taking second by lap three after starting in the seventh position. Just behind him was Toxic Moe who got crossed up on the backstretch and collected Randy Roseman ending both drivers’ night.

Cole became a non-factor in the race after he spun on lap five and brought out another yellow flag.

Meanwhile, defending Bomber Champ Tom Ordway quietly moved into second position and took over the top spot from Henry one lap after the restart. Henry battled back to the outside of Ordway, but Ordway held him off and went on to pick up his second consecutive UMP Bomber A Main win.

Chris Henry fell off the pace and came to a stop on lap 10 giving up a possible second place finish.

Brian Przepiora was second at the finish followed by Brett Miller (who started last), B.J. Gregory and Jeff Foks, Jr.

Garry Domoe put on an exciting finish in the UMP Bomber B Main winning by just a nose.

Domoe took the lead at the start with some good battling just behind him. Wade Rick was trying to get to the inside of Cliff Bernard for second but didn’t know Jim Scout had gotten a nose just to his inside. Rick clipped the front of Scout’s car and both drivers went spinning into turn one bringing out the caution flag.

Curt Lancaster got up to second with two laps to go and then got by Domoe on the final lap for the lead, but Domoe battled back to the inside in the final set of corners and just beat Lancaster to the line.

The UMP Bomber C Main was marred by a slew of caution periods. The first of which came out when the leader Craig Turner spun in turn three turning over the top spot to Justin Woodruff.

Donovan Paskin and Richard Riffe were battling hard for second and made contact which broke the steering on the 53 of Paskin ending his night early.

Riffe continued on and eventually took the lead from Woodruff briefly. Jim Plotts from Holgate, Ohio assumed the lead on lap four and went on to win ahead of Billy Brown and Dewaine Slater. Richard Riffe fell back to finish fourth and Ron Bloomfield was fifth. 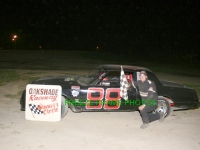 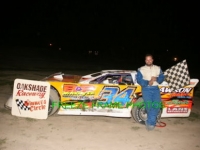 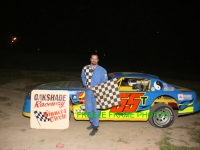