After getting rained out the week before, Mother Nature provided the perfect racing weather backdrop Saturday night for Wauseon Machine & Manufacturing Night at Oakshade Raceway in which Rusty Schlenk, Jerry Signor and Jeff Foks Jr. all picked up their fourth feature wins of the season.

It was Casey Noonan who pulled out to a big lead early in the Wauseon Machine & Manufacturing UMP Late Model feature event. About halfway through the race, McClure, Ohio’s Rusty Schlenk began to close up some of the distance on Noonan while working through lapped traffic. A Ky Harper spin would bring out the first caution flag in the race on lap 14 which put Noonan and Schlenk side by side for the double file restart. Noonan got the jump on Schlenk coming back to the green flag, but Schenk fought back and took the lead shortly after. Schlenk went on to pick up his fourth win of the year at Oakshade with Chris Keller finishing second. Noonan slipped back to finish third with Steve Kester finishing fourth and tightening up the championship point battle ever so slightly with Devin Shiels 39 points ahead after finishing the race just behind Kester in fifth.

Jerry Signor picked up his first UMP Sportsman feature win last month. Since then, the first year sportsman driver has been on a tear. Signor, our of Jackson, Michigan, led the entire distance of the Wauseon Machine & Manufacturing feature event to pick up his second consecutive feature win which vaulted him over Mike Jessen in to the championship point lead. Brandon Gregory made a run at Signor on the final lap, but could only get to his back bumper before settling for a second place finish. Jacob VanDeVoorde finished third with Jessen gaining nine positions to take fourth. Josh Robertson finished fifth.

Terry Rushlow, Jeff Foks Jr. and Adam Noonan entered the night separated by just 12 points in the Hot Rod Welding & Engineering Bombers points. The three drivers were battling in the top three spots in the Wauseon Machine & Manufacturing Bomber A Main until Noonan dropped out late in the race, giving up the third position on the track. Foks and Rushlow put on a great battle for the lead for most of the race with Foks coming out on top in the end. The Holland, Ohio, driver was also celebrating his sixth wedding anniversary. Rushlow finished second and still maintains a slim four-point advantage over Foks in the point standings. Amy Clair ended a nice run in third after starting ninth. Gabe Mueller and Cody Stetten were the rest of the top five finishers.

Oakshade Raceway Napa of Swanton Compact point leader had some bad luck after spinning while battling three-wide for the lead in the Wauseon Machine & Manufacturing feature event. This opened up the door for just the fourth different Compact feature winner of the year. Randy Murday led early, but Toledo, Ohio’s Cameron Tusing found his way to victory lane for the first time this year. Joe Elliot finished second followed by Ryan Okuley, Eric Carr and Murday.

Finally, the Wauseon Machine & Manufacturing Hot Rod Welding & Engineering Bomber B Main wrapped up the night’s racing action. Scott Hammer led early after starting on the pole, but quickly faded leaving Dylan Burt and Lyons, Ohio’s Curt Dickie to battle for the lead. Dickie went on to hold off Burt for his first feature win of the season. Terry Bowers finished third followed by Derrick Roseman and Haley Dippman.

A big night of racing is scheduled for Saturday, August 31 with Cricket Wireless Authorized Dealer Night featuring the final $2,000 to win American Late Model Series event of the year at Oakshade Raceway. UMP Sportsman, Hot Rod Welding & Engineering Bombers and the Napa of Swanton Compacts will also be back in action. Gates open at 4pm with hot laps at 6pm and racing at 7pm. Adult general admission is just $14! 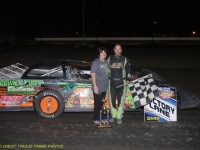 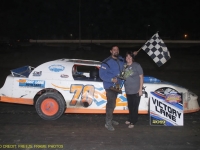 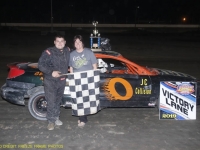 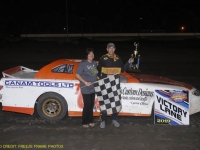 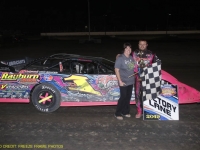