Earlier in the night, Dippman Motorsports fast qualifier awards ($75 each) went Rusty Schlenk in the UMP Late Models with a time of 15.435 and Kolin Schilt in the Bombers with a time of 17.352.

At the start of the 25-lap Dippman Motorsports UMP Late Model feature, Steve Miller jumped out to the lead after starting on the pole. Colin Shipley from Weston, Ohio, started on the outside of the second row and snatched away the lead by lap four. Behind him, Schlenk, Miller and Casey Noonan battled three-wide for second. This allowed Shipley to pull out to a decent sized lead over the second-place battle. Schlenk eventually took the second position and began to reel in Shipley. While working through slower back markers, Schlenk was able to catch Shipley and challenge for the lead. Schlenk bounced off the front stretch wall a couple times trying to find away around the teenage driver but had to settle for second as Shipley took the checkered flag for the first time in a late model feature event at Oakshade Raceway. Point leader Devin Shiels finished in second and also won the $100 Dippman Motorsports Hard Charger award for gaining the most positions (6) from the start of the race. Dusty Moore was fourth and Noonan fell back to finish fifth.

Rusty Smith was looking for his eighth UMP Sportsman feature win of the season at Oakshade and took the lead from Karl Spoores on the second lap of the 20-lap Dippman Motorsports feature event. Another young driver, Carter Murday from Adrian, Michigan, had other plans and put on a heck of a battle with Smith for the race lead. Murday would lead lap 15, but Smith regained the lead the next lap. Murday and Smith raced side by side the final couple of laps with Murday edging out Smith for his third feature win of the year. Murday’s advance of four positions also earned him the additional $100 Dippman Motorsports Hard Charger award. Point leader Mike Jessen finished third followed by Spoores and Jake Gamber.

Wauseon, Ohio’s Adam Lantz started on the pole of the Dippman Motorsports Bomber A Main and led from flag to flag for his third A Main win of the season. Kolin Schilt was able to pressure Lantz for the lead near the finish but ended up finishing second. Jeff Foks Jr. finished third and continues to close up the points battle with Gabe Mueller who ended up fourth. Mueller leads the points by just 16 with two more point racing weekends left in the season. Donnie Ringman finished the A Main in the fifth position and Josh Corkwell gained nine positions to finish ninth to win the Dippman Motorsports Hard Charger award.

The Dippman Motorsports Compact A Main featured quite a few great battles for the lead. Joe Carr and last week’s feature winner Jason Deshler battled early with Carr getting out front. Eric Carr then entered the mix for the lead and got it, but the race wasn’t yet over. While Deshler and Eric Carr continued to battle for the lead, Hillsdale, Michigan’s Cory Gumm passed both drivers to take the lead at the white flag. Gumm went on to post his sixth feature win of the season with Eric Carr edging out Deshler to finish second. Joe Car finished third with Joe Elliott in fifth. John Roby Jr. finished ninth but gained six positions during the race to earn the Dippman Motorsports Hard Charger award.

The Dippman Motorsports Bomber B Main featured more exciting racing for the lead and a photo finish. Chris Bleikamp started on the pole and led the field going into the first set of turns. Shane Estes from Waterville, Ohio, ducked to the inside of Bleikamp and took the lead coming off the second corner with a little bit of contact between the two drivers. Estes would lead most of the race with Bleikamp pressuring in second. Bleikamp took advantage of a restart after a lap nine caution to move to the inside of Estes and reclaim the lead, but Estes would crossover back under Bleikamp in turns three and four to retake the lead with two laps to go. Roscoe Stetten closed in late and got up alongside Estes on the final lap coming to the checkered flag with Estes barely hanging on to pick up the victory. Cody Stetten got by Bleikamp to finish third and Josh McNicol ended up fifth. Bill Reeves Jr. was the Dippman Motorsports Hard Charger winner, gaining nine positions after starting last.

Gage Rushlow took the lead at the start of the final event of the night, the Compact B Main but then appeared to have some handling problems. Taj Mitchell would take the lead and Rushlow ended up spinning on lap four to bring out the yellow flag. Mitchell, out of Edon, Ohio, would lead the rest of the way and take the checkered flag over Todd Drewes Jr., James Davis, Jonathan Gerard and Christian Hulbert.

The final Oakshade/Attica Late Model Challenge Series event is set for this Saturday, August 28 at Oakshade Raceway. The Sportsman, Bombers and Compacts will also be in action with gates opening at 4pm, hot laps/qualifying at 6pm and racing at 7pm. 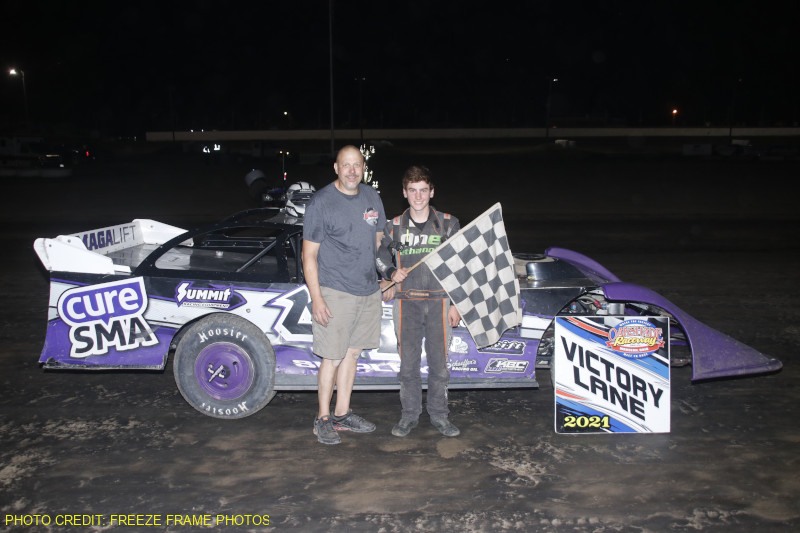 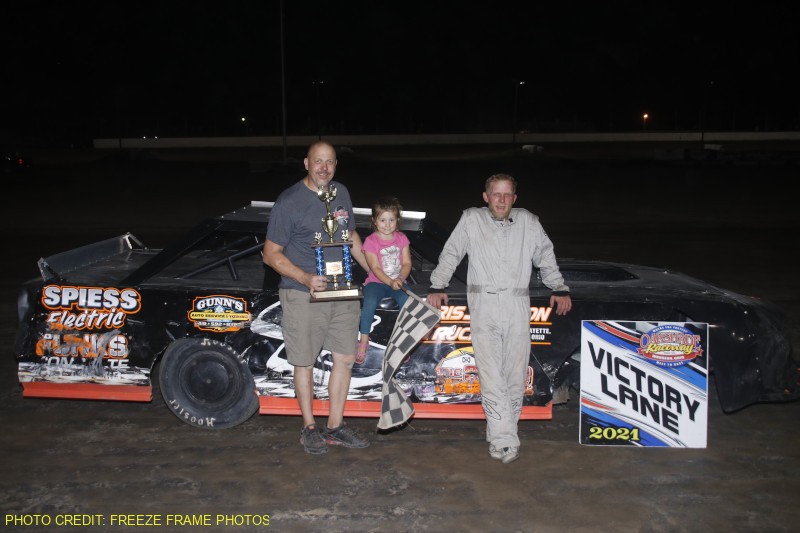 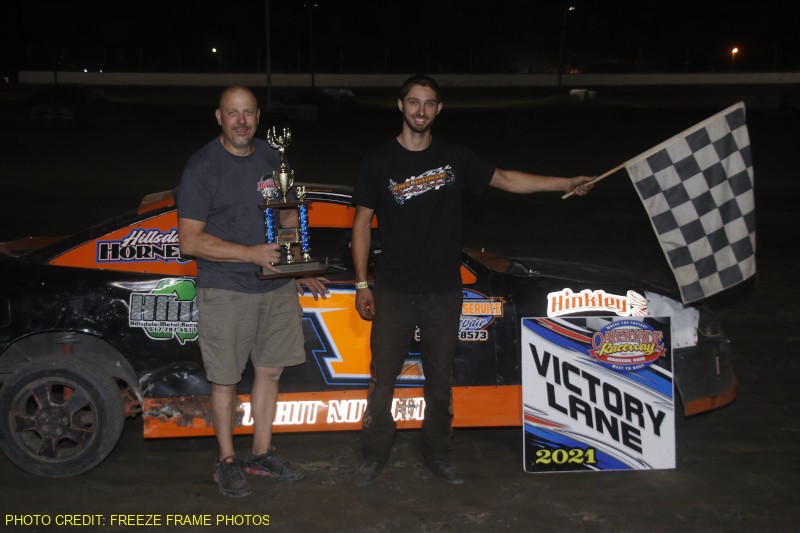 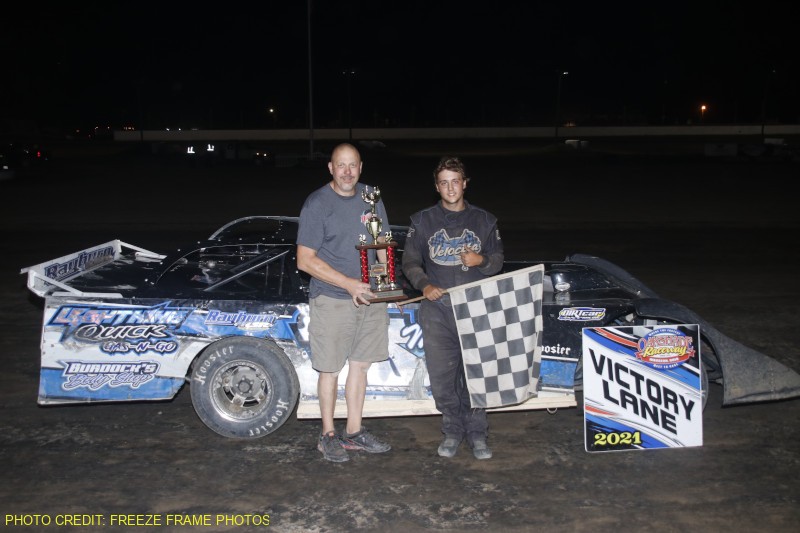 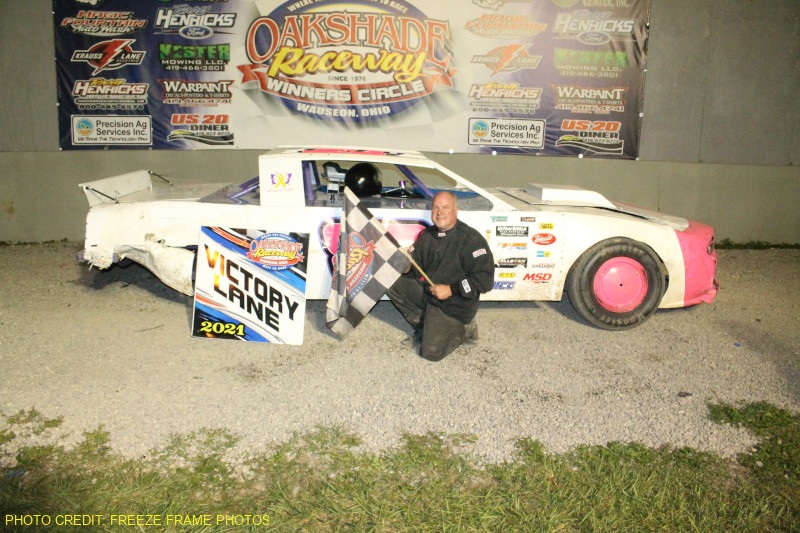 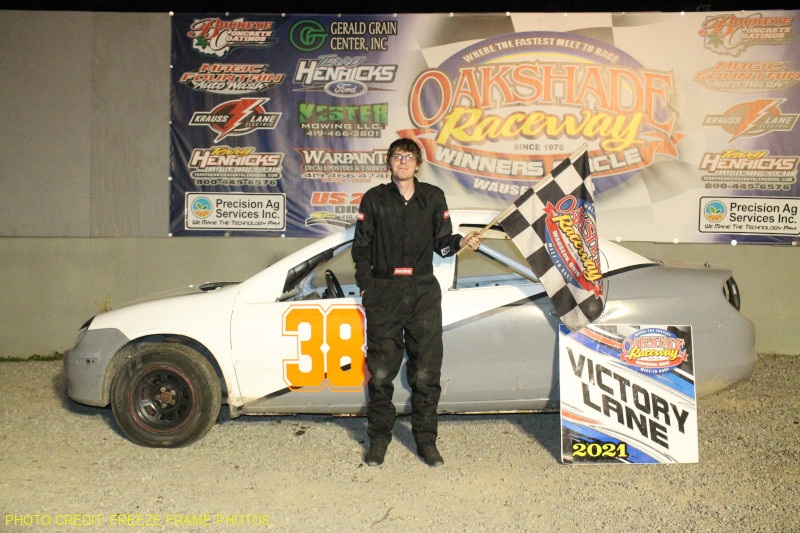