Adrian Michigan’s Chris Keller showed up to Oakshade Raceway without a single sponsor on the No. 67 Late Model, but that didn’t matter, as Keller would beat the field in the 50-lap Hell Tour UMP Late Model Finale, leading wire to wire. No. 2 Nick Hoffman bagged the 25-lap Dirtcar UMP Modified A Main victory. No. 63R Terry Rushlow won his 4th Hot Rod Welding and Engineering Bomber A Main, while No. 11C Bubba Cundick picked up the B Main win.

Kicking off the features were the UMP Late Models in their 50 lap feature event. Chris Keller and No. 7R Kent Robinson would bring the field to green. Keller took the lead and headed to the bottom of the track, pulling away early over Robinson and No. 99JR Frank Heckenast Jr. Caution would fly on lap 5 for No. 23 Ryan Vanderveen spinning in turn 2. On the restart, No. 55 Jeep Van Wormer fought his way to 3rd, and set his sight on the leaders. No 25 Jason Feger headed to the top of the track and began his march toward the front. The leaders would get to lapped traffic on lap 15 and that would allow Robinson to close on Keller. No. 50 Ryan Missler would bring out the next caution on lap 18 when the driveshaft came out of his car and he came to a stop on the backstretch. On the restart, Feger powered his way to 3rd and Van Wormer lost multiple spots. Keller would pull out to a 10 car length lead and was on a roll until lap 33, when the No. 06 Jake Rendel proved to be a thorn in the leaders’ sides as they tried to put him a lap down. Keller cleared Rendel on lap 39 and set sail once again. Rendel would hold his line and fight hard to stay with the leaders, holding up Robinson long enough for Feger to make his way to 2nd on lap 42. Keller would win over Feger, Robinson, No. 2 Travis Stemler, and No. 3 Brian Shirley, who would be crowned UMP Summer Nationals Champion and picked up the $25,000 check for the 3rd time in his career.

Next up the UMP Dirtcar Modifieds would take the track with No. 88 Matt Crafton and No. 99 Hunt Gossum pacing the field to the green flag. The 14 year old Gossum would charge to the lead early with Crafton settling in 2nd. Hoffman began to make his moves by lap 2, getting by Crafton and setting his sights on Gossum. Gossum looked to be in control of this feature until lap 20, when No. 975 Reed Hurst spun right in front of the leader, and Gossum made contact as he got by. On the restart, Hoffman wasted no time in getting by Gossum for the lead in the middle of the track. Caution would wave just before the checkered flag, setting up a one lap dash for the finish. Gossum would leave the track however, thinking the race was over. That handed 2nd to Crafton, with No. 12 John McClure finishing 3rd, No. 555 Justin Coulter 4th, and No 5 Curt Spaulding completing the top 5.

The Bomber A Main was next with No. 8 Adam Lantz and No. 55 Dylan Hough leading the field to green. Lantz would grab the early lead before mechanical woes sent his pitside on lap 3.No. 63 Terry Rushlow would assume the lead and never look back. Multiple cautions kept this one close, but ultimately, time would run out, as Rushlow grabbed his 4th Bomber A Main Victory of the season over No. 96 Donavan Paskan, No. 70 Jeff Foks Jr., No. 21s Roscoe Stetten, and No. T62 Curt Dickie.

The Bomber B Main would wrap up the night’s racing action, with No. 123 Dave Mc Mannamy and No. 721 John Martis leading the field to green in the 12 lap event. No. 4G Justin Gamber would grab the lead on lap 2 and try and set sail. No. 11C Bubba Cundick battled his way to 2nd by lap 6, and started heading for the lead. After a lap 8 caution, Cundick battled side by side with Gamber and came out with the lead and the win. Gamber finished 2nd with No. B18 Dan Bleikamp 3rd, Martis 4th, and No. 711 Amy Clair completing the top 5.

Oakshade Raceway roars back to life next Saturday July 20th, with a full show featuring the UMP Late Models, UMP Sportsman division, Hot Rod Welding and Engineering Bombers, and Napa of Swanton Compacts. Gates open at 4PM, Hot Laps at 6pm, and Racing at 7pm. General admission for ages 12 and older $14. Pit Passes all ages $25. Get details on this and all events at oakshaderaceway.com 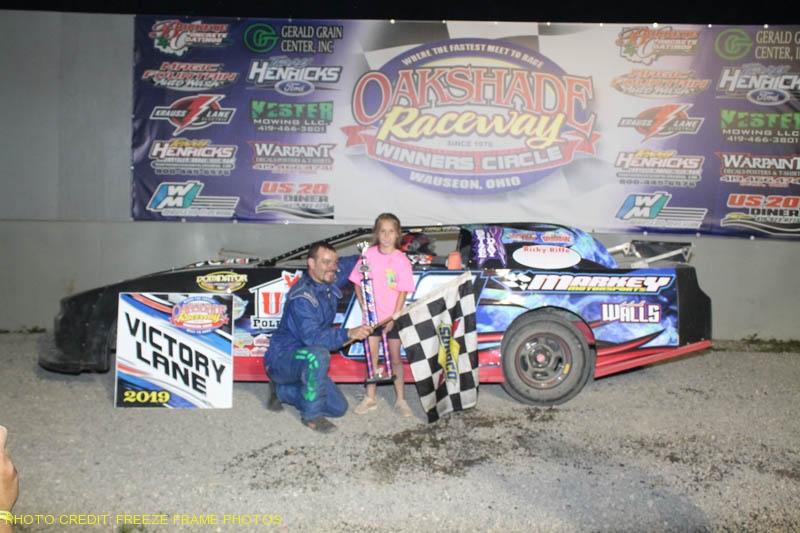 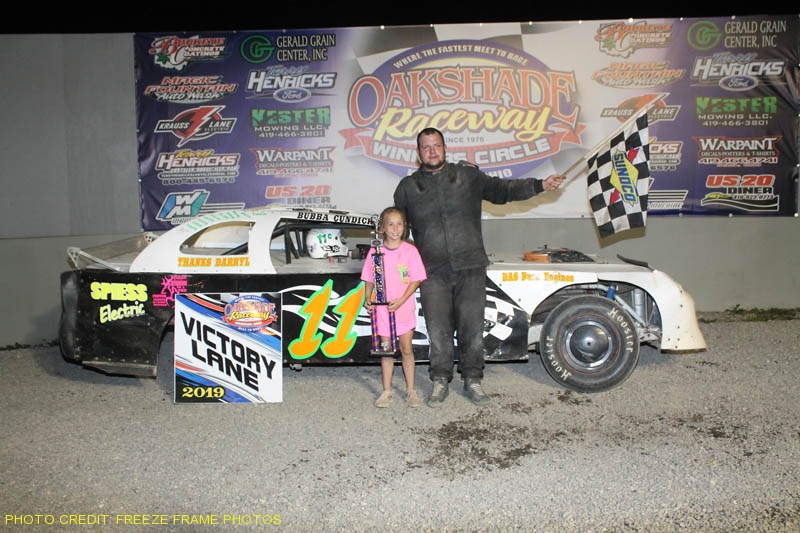 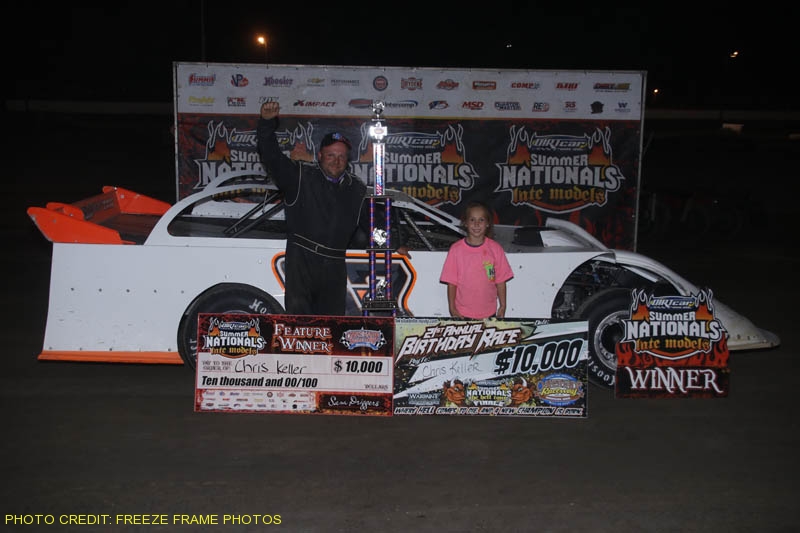 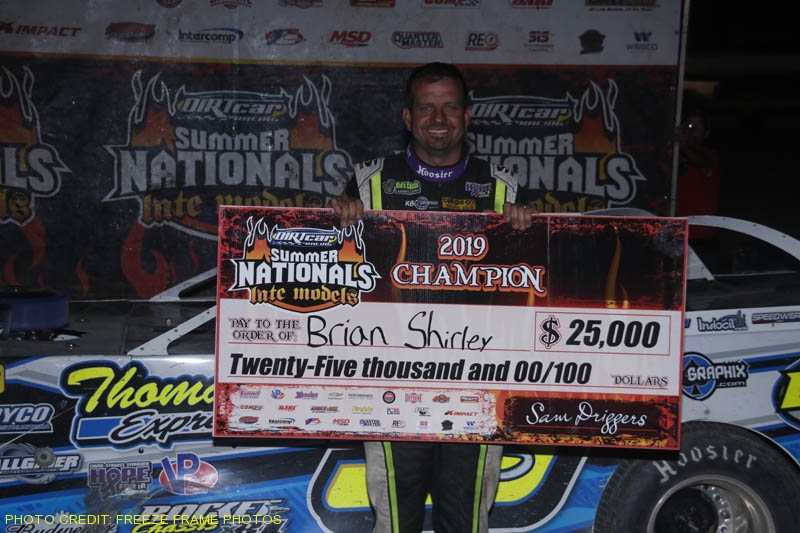 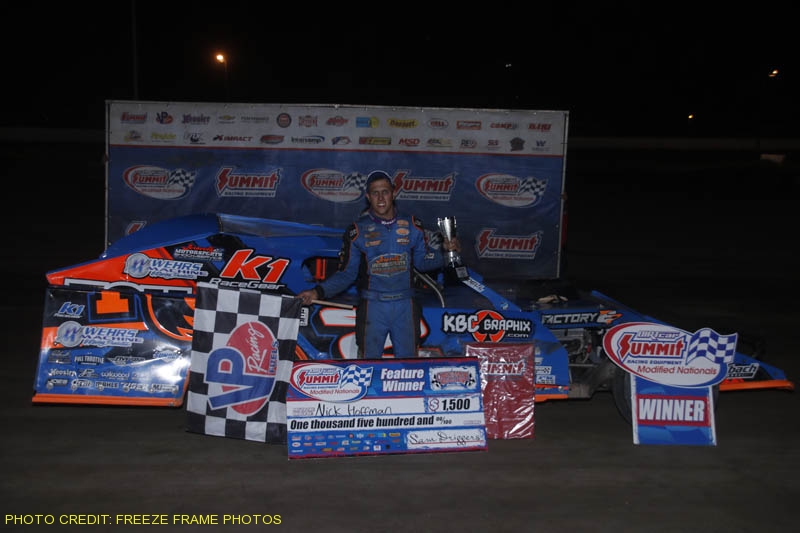