WAUSEON, OH – Kolin Schilt has had a great deal of success this season at Oakshade Raceway. A few weeks back, he unofficially wrapped up his first Dominator Super Stock track championship. On Saturday night, Schilt added another first-time accomplishment by earning the $1,000 Papa Boiler Dominator Super Stock Spectacular win.

At the start of the 25-lap Papa Boiler Dominator Super Stock Spectacular, Scott Hammer snatched the early lead over Dylan Burt and led the first few laps. An early caution would tighten up the field after Burt and Jeff Foks Jr. spun while battling for second. Shortly after the restart, Adam Lantz and Stryker, Ohio’s Kolin Schilt got by Hammer for the top two positions. Lantz and Schilt would trade the lead a couple times with Lantz eventually settling in to the top spot. A late caution would tighten the field one last time with Schilt trailing Lantz. Lantz would cross the finish line first, but due to a post-race inspection protocol violation Lantz would be stripped of the win. The top five finishers were instructed to remain on the track after the race, but Lantz headed to the pits. Schilt was awarded the victory, his first Papa Boiler Dominator Super Stock Spectacular win. Last year’s winner, Gabe Mueller, finished second followed by Jordan Conover, Adam Noonan and Roscoe Stetten.

Next up was the DIRTcar UMP Late Model feature with Eric Spangler from Lake City, Michigan, starting on the pole. Spangler took the lead and drove away from the rest of the field. Dusty Moore was running just outside the top five when his car slowed and brought out the caution flag with just four laps remaining which wiped out Spangler’s huge lead. Casey Noonan restarted in second behind Spangler and could not mount a challenge in the final laps as Spangler went on to pick up his first ever Oakshade Raceway feature win. Noonan finished second with outside polesitter and 2013 track champion Dona Marcoullier ending up third. Devin Shiels and Rusty Smith were the rest of the top five finishers.

Jeff Robertson and Rusty Smith, who was doing double duty, put on a great battle for the lead early in the Sportsman feature race. Smith would win that battle and pull away with the lead until a caution for a spin halfway through the race. Josh Robertson would pressure the Sylvania, Ohio, driver late in the race, but Smith would hang on for the win. Last week’s feature winner, Carter Schlenk, finished third with Jesse Jones and Ryan Davis rounding out the top five finishers.

Kaleb Hinkley started on the pole of the Compact A Main alongside Jason Deshler. Deshler would jump out to the initial lead over Hinkley. The Angola, Indiana, driver would fight back and get the lead from Deshler on lap three. Deshler would follow close behind Hinkley the final seven laps, but could not mount another significant challenge as Hinkley went on to take the checkered flag. Last week’s feature winner Eric Carr drove to a third-place finish just in front of Jerry Means. Jason Bailey finished fifth.

The Compact B Main wrapped up a jam-packed night of racing with Todd Drewes Jr. and Josh Beaver having a heck of a battle for the lead in. The two drivers raced side by side and even three-wide at one point as the leaders split around a slower lapped car. Drewes out of Whitehouse, Ohio, eventually got the advantage over Beaver and went on to pick up the victory. James Stamper started dead last and drove up to finish third with Lawrence Mullins and Sean Farley the rest of the top five finishers.

Oakshade Raceway will wrap up the 2022 season on Saturday, September 24 with Topless Night and the $1,000 to win Sportsman/Modified Dirt Duel. Late Models, Sportsman and Dominator Super Stocks will have the option to remove the roofs from their cars and the Sportsman and UMP Modifieds will run in a combined class for the $1,000 to win feature event. Compacts will also be in action. Gates open at 4pm with hot laps/qualifying at 6pm and racing at 7pm. 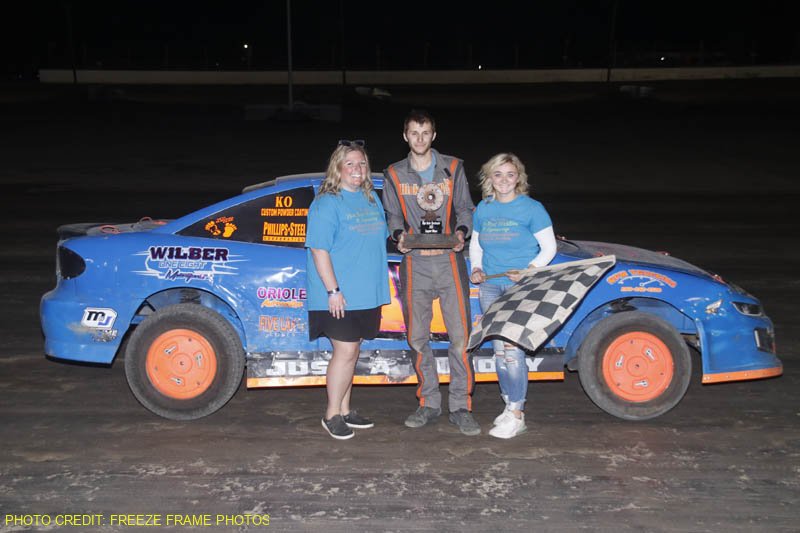 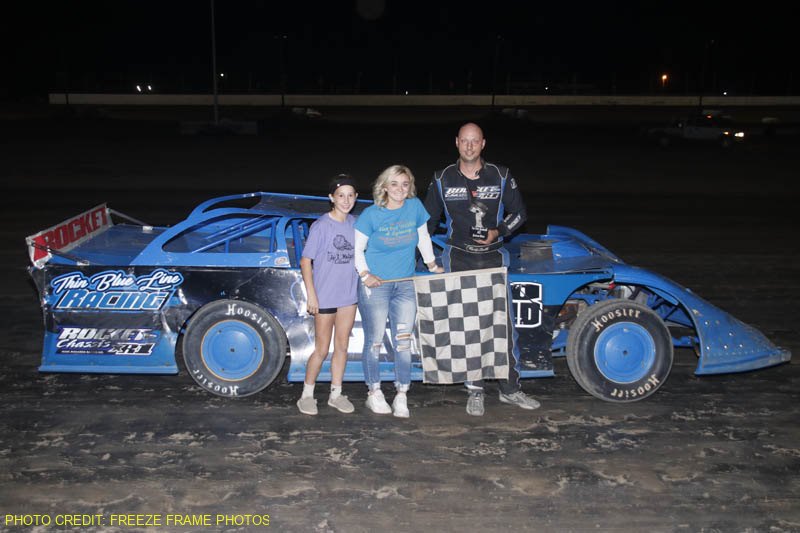 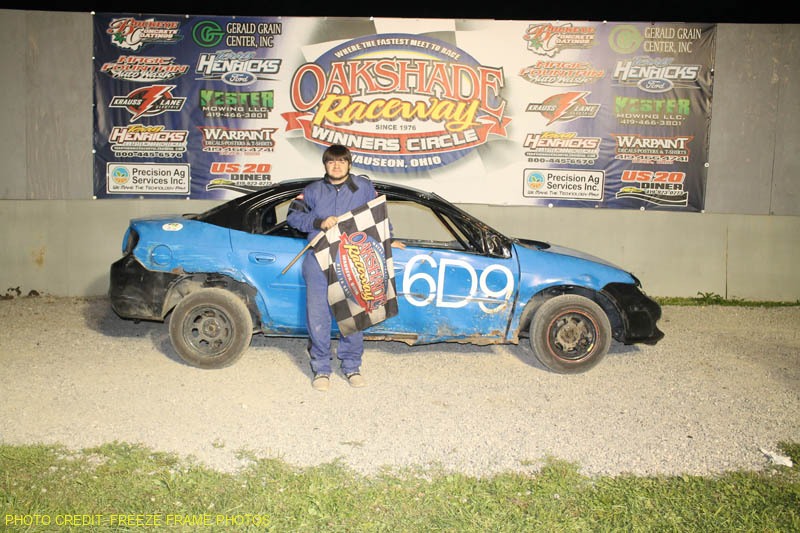 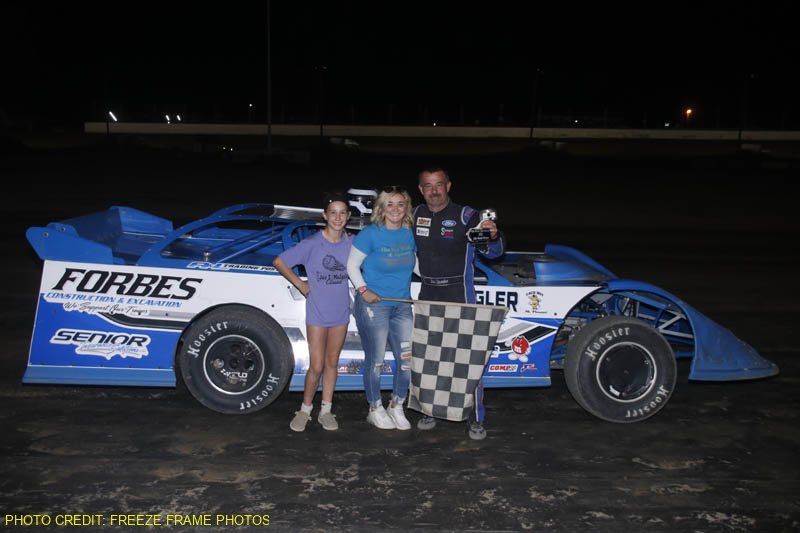 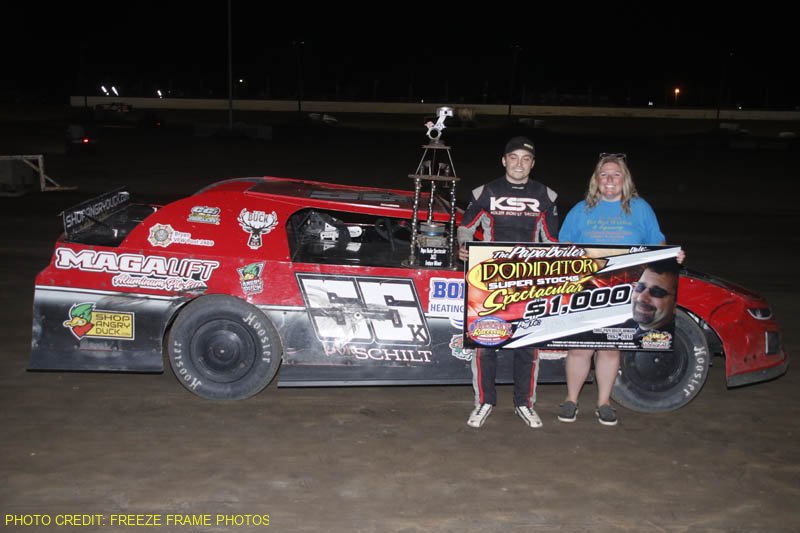