Tyler Gunn shot out to the lead after starting on the outside of the front row of the Central Collision Night BOSS non-wing sprint feature. He would lead the first lap, but Hewitt took command by lap two. Hewitt proceeded to open up a huge lead over Gunn and the rest of the field, but a red flag for a Ryan Barr flip on lap 15 would wipe that lead out. Barr was uninjured. On the restart, Gunn applied the pressure, getting up alongside Hewitt for the lead. The two drivers battle for several laps, but Hewitt eventually was able to drive away once again and capture the first sprint car checkered flag at Oakshade since 2001. Tyler Gunn settled for a second place finish with BOSS point leader Matt Westfall ending up third. Kory Crabtree and Steve Irwin were the rest of the top five finishers.

The 25-lap Central Collision Night UMP Late Model ran caution free. Mathew Chapman started on the pole and looked strong at the start. Chapman would lead the first eight laps, but McClure, Ohio’s Rusty Schlenk tracked him down and made the pass for the lead on lap nine while working through slower traffic. Schlenk continued to masterfully work through lapped traffic on his way to career late model win number 203 and his third of the year at Oakshade. Chapman would fend off last week’s feature winner, Devin Shiels, to finish second. Shiels’ third place finish keeps him atop the track championship point standings with Steve Kester just 42 points behind after his fourth place finish. Dusty Moore started fifth and finished fifth.

Bob Gregory won last week’s UMP Sportsman feature event and earned a pole starting position after winning his heat race earlier in the night. Gregory led the first eight laps of the Central Collision Night UMP Sportsman feature, but Jackson, Michigan’s Jerry Signor was hungry for another feature win after picking up his first two sportsman feature win within the past month. Signor and Gregory race side by side a couple laps with Signor taking the lead on lap nine. Signor credited his recent success to former track champion Mike Jessen who gave him some pointers on his sportsman. Jessen would end up finishing third and hangs on to a slim five point advantage over Signor in the track championship point standings. Brandon Gregory started eighth and made a late charge end up finishing second, just ahead of Jessen. Joe Smith and B.J. Gregory were the rest of the top five finishers.

The top three in points battled at the front of the Hot Rod Welding & Engineering Central Collision Night Bomber A Main. Terry Rushlow, the bomber point leader, led the entire distance with Jeff Foks Jr. hounding him for the lead late in the race. Rushlow, from Holland, Ohio, held on for the win with Foks settling for second after winning last week’s A Main. Adam Noonan finished third and remains third in the points with all three drivers within 12 points of each other. Dan Dippman gained six positions to finish fourth and Justin Gamber climbed seven spots to end up fifth.

Saturday’s racing program ended with a first time Hot Rod Welding & Engineering Bomber B Main winnner. Shane Estes out of Waterville, Ohio, started on the pole and held off a heated challenge from John Lonabarger to win his first ever Bomber B Main. Multiple cautions kept the field tight and the race ended in a one-lap shootout after the time limit had expired during the last caution period. Estes used some strategy and restarted very late in the restart zone to try to get the advantage and it worked. Lonabarger had to fight off Dave McMannamy to finish second. Chris Bleikamp finshed fourth behind McMannamy and Cameron Tusing, who is a regular competitor in the Napa of Swanton Compact class, stayed out of trouble and drove his way to a fifth place finish.

Oakshade Raceway will host the Oakshade/Attica Late Model Challenge Series finale on Saturday, August 17, as part full racing program that also includes UMP Sportsman, Hot Rod Welding & Engineering Bombers and Napa of Swanton Compacts. Devin Shiels, Casey Noonan, Steve Kester and Dan Wallace are all within three points of each other in the Oakshade/Attica Late Model Challenge Series heading into this weekend’s final events at both tracks. Gates open on Saturday at 4pm with hot laps at 6pm and racing at 7pm. Adult general admission is just $14. 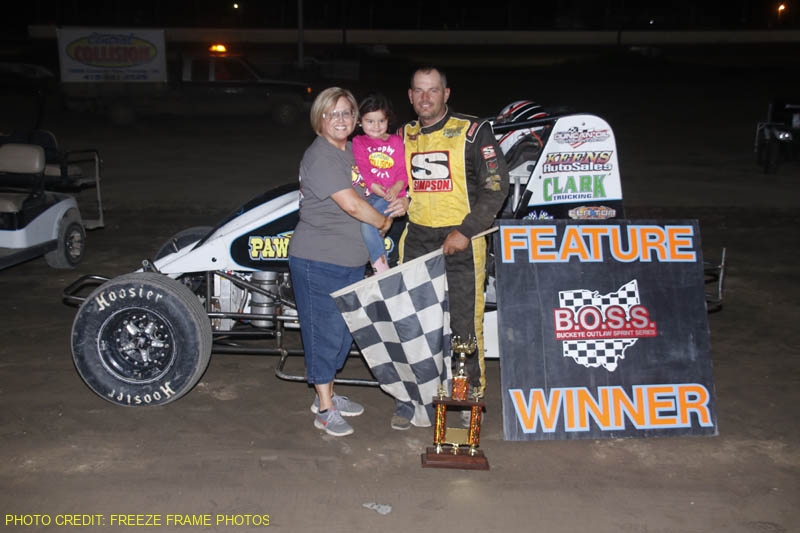 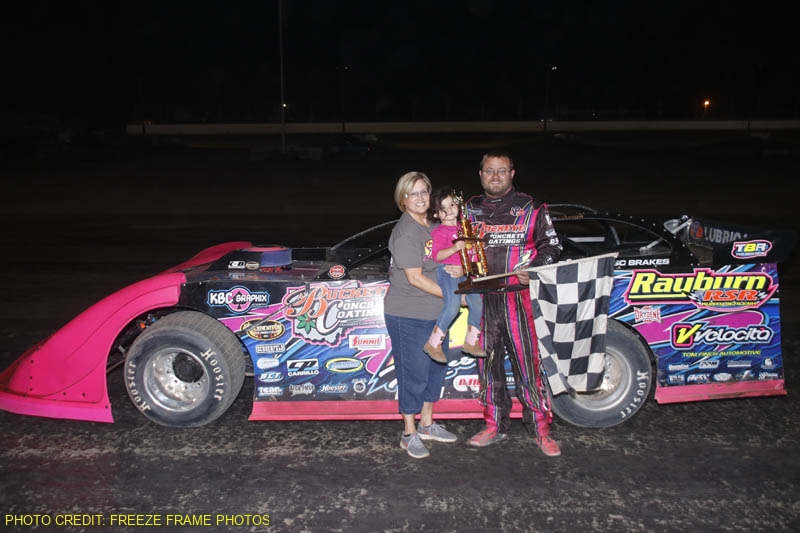 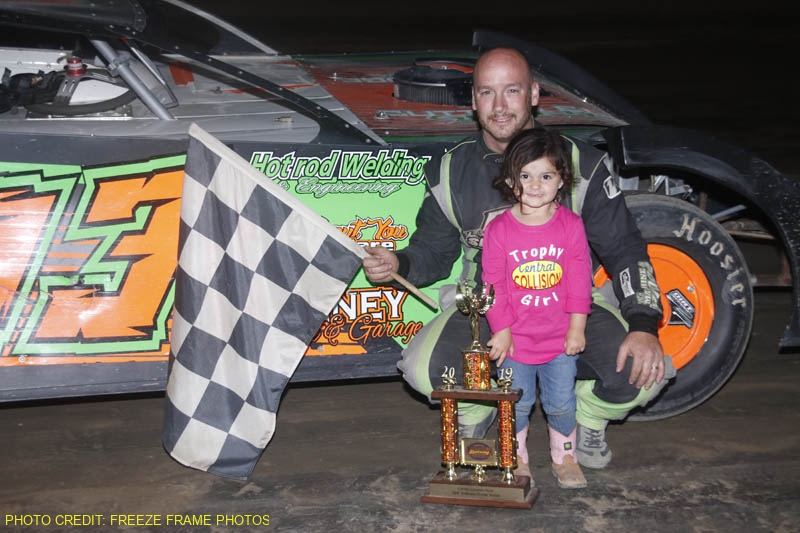 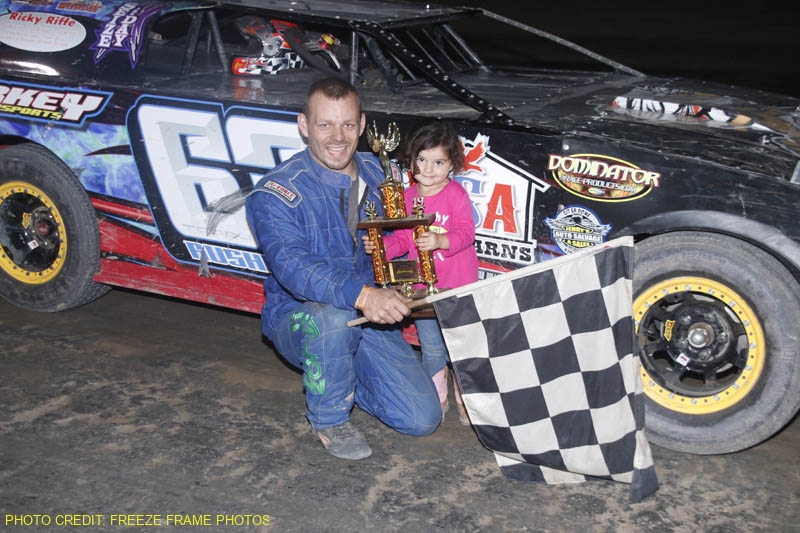 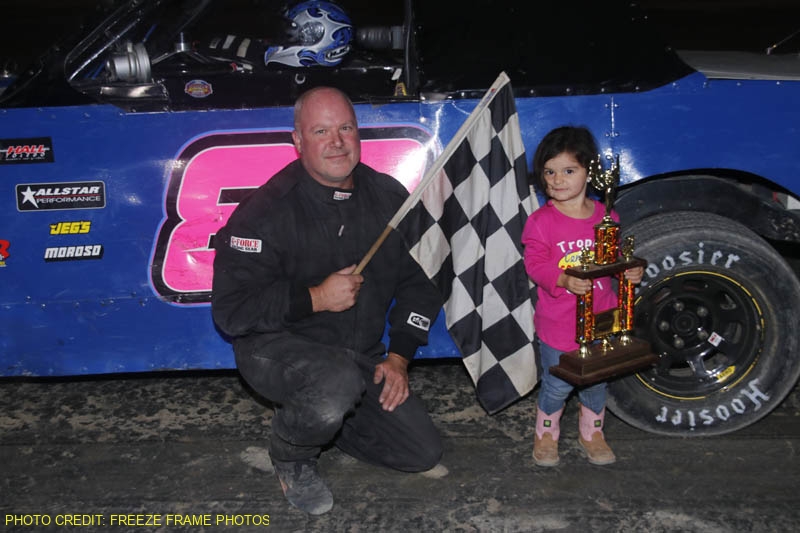