Rusty Schlenk convincingly picked up his third feature win of the season Saturday night at Oakshade Raceway in the second event of the Attica/Oakshade Late Model Challenge Series sponsored by Napa of Archbold, Bryan and Wauseon, Dirt Nerds Podcast and Soldier Boy Productions.

Schlenk started on the pole of the 25-lap UMP DIRTcar Late Model main event and jumped out to a commanding lead right from the drop of the green flag. The red flag flew on lap number two after Brad Wade got crossed up on the backstretch collecting a few other cars including that of Mathew Chapman who ended up rolling over. It was Chapman’s first night out in competition this season. Shortly after the restart, Dusty Moore got the advantage over Schlenk for the race lead. The McClure, Ohio, driver would reclaim the lead one lap later and drove off to a huge lead on the way to his third feature win at Oakshade Raceway this year. Moore held on to finish second just ahead of a hard-charging Jon Henry who ended up third after starting 16th. Steve Kester and point leader Casey Noonan were the rest of the top five finishers.

Rusty Smith’s winning streak was finally snapped in the UMP DIRTcar Sportsman class at Oakshade Raceway after Adrian, Michigan’s Billy Brown took his first checkered flag of the year. Brown started on the pole and battled early with Rusty Smith who had won the previous four features. Another Smith, Joe Smith, worked his way to the inside of Brown to challenge for the race lead with a handful of laps remaining. Joe Smith would slip back to finish third with Brandon Gregory getting by to finish second. Point leader Rusty Smith ended with his worst feature finish of the year in fourth. Josh Robertson was fifth.

Stryker, Ohio’s Kolin Schilt earned his second Hot Rod Welding & Engineering Bomber A Main win of the season. Gabe Mueller took the early lead with Jeff Foks second. Foks would get collected on a lap nine caution sending him to the rear for the restart. A couple more top contenders were caught up in a lap 10 incident that involved Adam Noonan, Gregg DeTray and Rich Riffe. Only Noonan would continue. In the end, Schilt avoided trouble to take the checkered flag ahead of William “Bubba” Cundick, Tim Fisher and Adam Noonan. Foks recovered to finish fifth.

Charles Hargett rolled over in turn two on the first lap of the Compact feature event to bring out the red flag. The red flag received quite a workout as Hargett’s was one of at least four cars getting wheels up on the night. Once things got going, point leader Kevin Murday, Mark Barrick and Joe Elliott battled for second behind race leader Cory Gumm out of Hillsdale, Michigan. Gumm went on to pick up his second consecutive Compact feature win with Barrick finishing second. Elliott finished third followed by Murday and Joe Carr.

Chane Stuckey drove out to a big lead at the start of the Hot Rod Welding & Engineering Bomber B Main. A lap seven caution would tighten up the field with Josh Corkwell restarting second and Adam Lantz third. Lantz, winner of last week’s A Main, passed both Corkwell and Stuckey to take the lead by lap nine. Lantz went on to lead the final three laps and pick up the victory. Stuckey and Corkwell followed in second and third respectively. Chris Bleikamp finished fourth and Dave McMannamy climbed five positions to end up finishing fifth.

Oakshade Raceway will be back in action Saturday, July 4th with a full racing program of UMP DIRTcar Late Models, UMP DIRTcar Sportsman, Hot Rod Welding & Engineering Bombers and Compacts. Grandstands will be open once again with fans practicing social distancing. Gates open at 3pm, hot laps at 6pm and racing at 7pm. 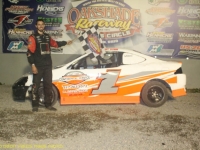 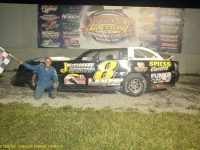 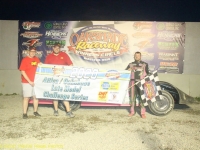 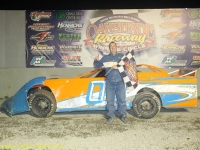 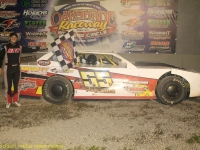 WAUSEON, OH – Saturday night Oakshade Raceway welcomed fans to the grandstands for the first time in 2020 thanks to the easing of some restrictions from the health department. A decent crowd, practicing social distancing, was treated to some great racing action in the 31st Barney Oldfield Memorial Race with Parkersburg, West Virginia’s Tyler Carpenter adding his name to the winners list of the prestigious event.

Three-time and defending Barney Oldfield winner Rusty Schlenk started on the outside of the front row of the UMP Late Model main event and took the initial lead over 2008 Barney winner Casey Noonan. Tyler Carpenter started inside the second row and took second from Noonan by lap two. Carpenter began to close the distance on Schlenk, but slipped up high in turn four and lost a good deal of ground, but still maintained second position. Carpenter regrouped and began to close back in on Schlenk while working through lapped traffic. He finally ran Schlenk down and took the lead on lap 24 of the 40-lap feature race. Schlenk fought back under Carpenter and regained the lead briefly on on lap 26 after some exciting door to door racing action. The 28 car of Tyler Carpenter took the lead for good on lap 28 and looked to be cruising to the victory when the one and only caution flag flew with one lap to go after Brad Wade spun in turn four. That would tighten up the field with Schlenk, Noonan, Matt Miller and Devin Shiels lined up directly behind the race leader. Carpenter was flawless on the restart and his first visit to Oakshade Raceway earned him the $4,500 Barney Oldfield win. Schlenk settled for second after two feature wins in his two previous visits to Oakshade this season. Matt Miller was able to get by Casey Noonan to finish third. Noonan’s fourth place finish put him on top of the Oakshade point standings. Devin Shiels ended up finishing fifth.

Rusty Smith out of Sylvania, Ohio, continued his dominance in the UMP Sportsman class, earning his fourth consecutive feature win after starting on the pole. Bruce Stuart ran right behind Smith early in the race, but later slipped back. Multiple cautions kept the field from getting too stretched out. Late in the race, Brandon Gregory and Josh Robertson gave Smith a little pressure while battling each other for second just behind the race leader. Smith was able to hang on to claim the victory and further cushion his point lead. Gregory finished ahead of Josh Robertson for second with Stuart finishing fourth. Matt Ringger was fifth.

In his first appearance of the season, Adam Lantz made it a memorable one. Lantz won his Hot Rod Welding and Engineering Bomber heat race and started on the outside of the front row in the A Main. The Wauseon, Ohio, driver then went on to drive to win the feature over Adam Noonan, William “Bubba” Cundick, Rich Riffe and Donovan Paskan.

Defending Compact track champion Cory Gumm earned his first Oakshade feature win of the season. Gumm, out of Hillsdale, Michigan, started on the outside of the second row behind Eric Carr who took the initial lead. Three laps in, Gumm took command and drove away to the victory. Carr maintained a second place finish followed by Joe Elliott, Joe Carr and Charles Hargett.

Burt Sharp jumped out to the lead of the night’s final event, the Hot Rod Welding and Engineering Bomber B Main. Josh Corkwell pressured Sharp, but Swanton, Ohio’s Gregg DeTray flew up through the field after starting at the back to take the lead away. DeTray went on to pick up the win with Corkwell hanging tough in second. Scott Barnhart edged out Scott Hammer for third and Dylan Burt finished fifth.

Coming up this Saturday, June 27th, Oakshade Raceway will host its first Oakshade/Attica Late Model Challenge Series event which includes a full show of UMP Late Models, UMP Sportsman, Hot Rod Welding & Engineering Bombers and Compacts. Because of the restrictions that have been in place due to the Covid-19 pandemic, the Night of Wheels portion of this upcoming weekend’s events has been canceled. Make sure to follow Oakshade Raceway on social media and our web site at oakshaderaceway.com for the latest information. 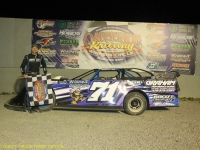 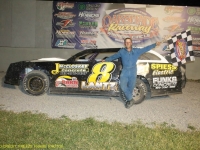 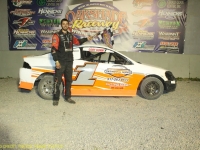 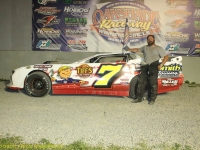 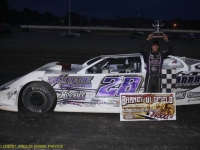