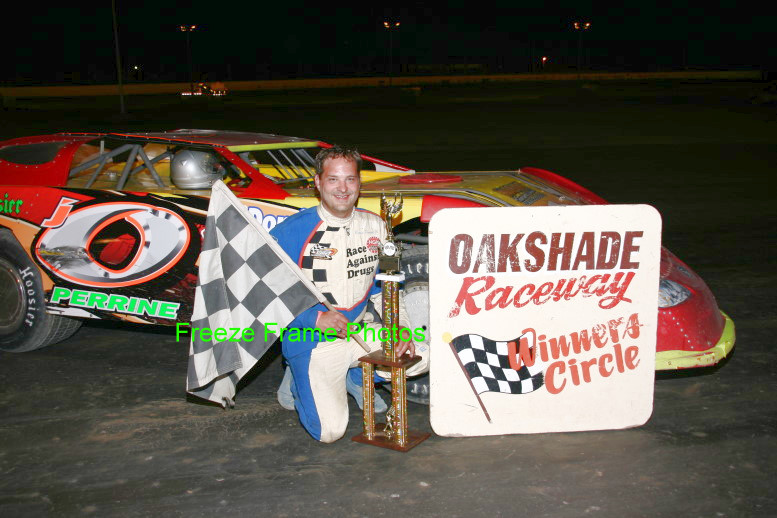 Perrine started on the pole of the 25-lap feature and the action heated up right from the start as Casey Noonan raced him side by side for the first couple laps.

The only caution flag flew on lap two for a Bryan Koebbe spin in turn two. Brian Ruhlman took advantage of the restart and got by Noonan for second then began to pressure Perrine for the lead.

With Perrine and Ruhlman duking it out for the lead, Noonan had a great run and shot right though the middle between both cars to grab the lead on lap six. Noonan then began to pull away until he caught traffic at the tail end of the field.

Noonan got held up just enough behind Kris Patterson who was struggling to stay on the lead lap to allow Ruhlman to scoot by to the inside for the lead.

Perrine fought back past Noonan and then to the inside of Ruhlman on the final lap and took the lead on the backstretch. Ruhlman made one last desperate attempt to reclaim the point as he tried to dive back under Perrine in the final set of corners. There was not enough room and contact threw both cars sideways in the last turn. Perrine saved his car and maintained the lead to give the Lima, Ohio driver his second UMP Late Model feature win ever at Oakshade Raceway just three weeks after picking up his first.

Ruhlman ended up spinning after the contact, but kept going to finish back in seventh.

Mike Jessen won his first UMP Sportsman Feature of the year in one of the most exciting races of the season.

Jessen started on the pole and immediately took command, but by lap two, Josh Steinacker got to his outside and the two drivers raced side by side for the lead for almost the entire race distance.

Steinacker nosed ahead of Jessen by lap five for the lead, but two laps later Jessen forged his way back to the lead as they continued the side by side racing.

Steinacker once again had the advantage on lap 10 and Jessen regained the lead on lap 14 as both drivers fought hard leading each lap by just inches.

Rusty Smith tore the front end off his car after a restart from a late caution when he got a little too close to the inside barriers. Smith was running fourth before the accident.

Jessen continued to hug the inside with the lead after the next restart with Steinacker pouncing back to the outside where he likes to run, but Jessen kept Steinacker from winning his fourth consecutive Sportsman Feature by holding him off at the checkered flag.

After a slew of strong finishes this year, Jessen from Berkey, Ohio, finally found his way to victory lane. Steinacker took second and still holds on to a commanding points lead in the Sportsman division at Oakshade.

The UMP Bomber A Main featured another winner that started on the pole with Dan Dippman leading from flag to flag.

Bill Vorce lost a wheel on lap nine that tightened the field up behind Dippman with Chris Henry in second.

Last week’s feature winner Craig Dippman started dead last and worked his way up to eighth by lap eight and then spun in turn two to bring out the yellow flag forcing him to restart at the tail again.

Dan Dippman went on to win his third Bomber A Main of the year with points leader Tom Ordway getting by Henry for second. Jeff Foks Jr. was fourth and Jim Scout ended up fifth.

Dan’s brother Craig Dippman had to have passed the most cars in the race working back up to an eighth place finish.

The start of the Bomber B Main proved that Oakshade Raceway is indeed wide enough for some five-wide racing, but it is not always advisable on the first lap as it resulted in a pile up on the first turn after the drop of the green flag that involved Tim Zuver, Jeff Geis and Dennis Briegel among others.

Curt Lancaster opened up a big lead after the restart over David Goben and the rest of the field.

Kyle Light slid up just in front of Goben to take over second in turn two. Goben stuck his nose back to the inside when they exited the corner and contact sent Light spinning at the end of the backstretch. Light did a 360 and continued on without a caution, but lost about 5 positions on the track.

With Lancaster continuing to lead, Light closed back in on Goben and once again the two drivers made contact this time sending the 08 of Goben spinning in turn two setting up a one lap dash to the finish.

Kevin Hanford made things even more interesting than they already were by getting alongside of Lancaster on the final lap in a borrowed car. Lancaster managed to hang on by the nose of his car to capture his second Bomber B Main win of the year.

Lee Buck tried to hold off Jackson, Michigan’s Jerry Signor early in the UMP Bomber C Main, but lost the lead on lap three. Signor then checked out on the rest of the competitors and went on to his first feature of the year.

The biggest event of the year takes place this Saturday, July 14th with the 9th Annual Birthday Race. It is also the UMP Late Model Summer Nationals Finale wrapping up 30 consecutive nights of racing with only two days off. $10,000 will be up for grabs going to the winner of the UMP Late Model Feature. UMP Bombers will also be running with the UMP Sportsman division taking the night off.

The front gate will be open on Friday, July 13th from 11am until 9pm for campers and to reserve seats by putting blankets down on the bleachers. Everyone coming in Friday must purchase a ticket and/or a pit pass for Saturday’s event. Gates will then be open Saturday morning by 10am and the pits will be open for everyone to meet drivers and get autographs until 4pm. After 4pm, you must have a pit pass to remain in the pits. Racing will begin a little later than normal at 7:45pm on Saturday night. Please visit www.oakshaderaceway.info for more information on the highly anticipated Birthday Race event. 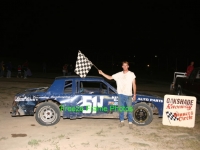 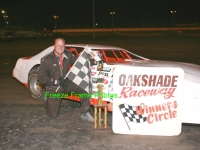 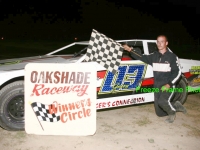 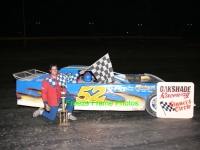 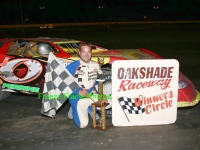