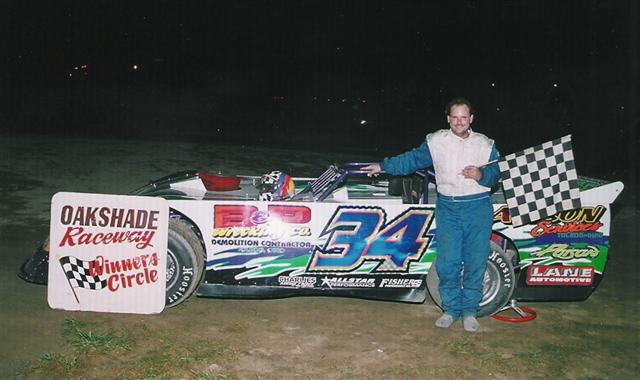 The Fifth Annual Bomber Spectacular was the highlight of the final Saturday night racing program of the season at Oakshade Raceway with Jim Scout taking top honors.

Close to 90 bombers showed up for a shot at taking home the $1000 for winning the Fifth Annual Bomber Spectacular. Ron Tolles was the fast qualifier of the evening.

Bill Toedter led at the start of the 30-lap feature event after starting on the pole.

The first yellow flag flew on lap six after Craig Dippman’s spin. Jake Rendel, Andy Borton and Dan Dippman crashed on the front stretch after the restart to bring out the second yellow.

With Bill Toedter continuing to lead Dan Bliekamp, the third yellow came out on lap 10 after Matt Shipley and Chuck Leininger made contact sending Leininger spinning around.

One lap after the next restart, Bliekamp got around Toedter to take the lead.

Danny Hogrefe and Craig Dippman got together on the front stretch on lap 17 sending both cars hard into the wall ending both drivers’ night.

Jim Scout worked his way up to second and began to put the pressure on Bliekamp for the lead after the restart. By lap 20, Scout took over the lead.

A late caution for Bill Toedter and Bob Gregory allowed Bliekamp one last shot at the lead on the restart. Scout was able to fend him off and win the Fifth Annual Bomber Spectacular. Bliekamp held on for second followed by Tom Ordway, Randy Roseman and Chuck Leininger.

A large number of late models made their presence for a topless night of racing. Fifty-four late model drivers cut the roofs off their cars for a fun night of competition at Oakshade.

Things got interesting real quick in the feature for the topless late models with Ron Miller and Ken Hahn getting together in turn two on the first lap. As the rest of the field slowed for the yellow, Brad Miller spun around facing oncoming traffic and Dan Wilkins ramped up and over Miller’s car landing back on his wheels and continued on.

Wilkins was less fortunate after the complete restart, getting together with Scott Gaff to bring out another yellow. Wilkins’ night ended with his car getting towed to the pits.

Zack Olger took the lead once things finally got going. Justin Paxton closed in quickly on the leader and the two drivers put on an amazing show swapping the lead back and forth lap after lap.

The great battle for the lead between Olger and Paxton continued as the two worked through lapped traffic.

On the final lap, Olger got held up just a bit behind some lapped cars, which allowed Paxton to pull away by about a car-length.

One final event remains on Oakshade Raceway’s race schedule for this season. A 200-lap/two hour enduro race is scheduled for Sunday, October 3rd at 2pm. 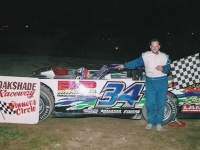 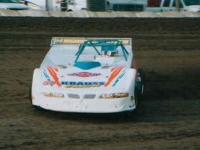 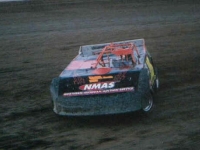