WAUSEON, OH – It was an exciting night of racing with 115 competitors filling the pits at Oakshade Raceway Saturday night. Devin Shiels greatly increased his chances of fourth straight UMP DIRTcar Late Model championship at Oakshade by claiming his second feature win of the season.

The Britton, Michigan, driver started on the pole and led the entire 25-lap UMP DIRTcar Late Model feature. He also pocketed an extra $100 thanks to Childress Collision in Delta, Ohio for leading at the halfway point. Childress also added another $300 to be spread out through the payout of the feature race. Jake Rendel’s track championship hopes suffered a setback on lap eight after he spun while running just outside the top five sending him to the tail. Dusty Moore got by point leader Steve Kester and Herb Reich to try to challenge Shiels for the lead but had to settle for a second place finish. Kester maintains a 25 point cushion over Shiels going into next week’s Season Championship Night after posting a third place finish. Reich slipped back to finish fourth with Mike Bores getting by Casey Noonan to finish fifth.

Adrian, Michigan’s Bruce Stuart started on the pole of the UMP DIRTcar Sportsman feature and stayed ahead of trouble to earn his second feature win of the year. Point leader Rusty Smith did not have a good night. Smith was running in the top five and spun on lap nine to bring out one of the many caution periods in the race. B.J. Gregory came charging up toward the front on the outside after starting fifth. Gregory put the pressure on Stuart and tried to duck under him coming off turn two. Unfortunately Gregory lost it and spun collecting most of the rest of the top five runners including Rusty Smith. Besides the leader, Brandon Gregory was the only top five runner to make it through. Brandon Gregory came into the night trailing Smith by 71 points. His second place finish coupled with Smith’s bad luck chopped that point lead down to 44 going in to next weekend’s Season Championship Night. Chris Williams, Trever Miller and Ian Palmer were the rest of the top five finishers after the time limit expired.

Kevin Murday out of Tecumseh, Michigan, started on the pole the Compact feature event and fended off point leader Eric Carr to earn his first feature win of the year. He also claimed an extra $100 that Cory Gumm Racing put up for the winner of the race. Joe Elliot finished third ahead of Jason Deshler who started deep in the field and ended up fourth. Aaron VanPelt picked up five positions to end up finishing fifth.

The red flag flew early in the Hot Rod Welding & Engineering Bomber B Main. John Lonabarger got crossed up coming off turn four and collected Brian Miller, Scott Hammer Jeff Strock and Ron Hulbert. Miller was assisted by the medical staff after some very heavy impacts. Adam Lantz was charged up through the field but had something break just before the finish. In the end, Lyons, Ohio’s Curt Dickie earned his second B Main feature win of the season with Dan Bleikamp finishing second. Pole-sitter Scott Barnhart slipped back to finish third followed by Shaun Sharp and Duane Fletcher.

With such a large car count, a Hot Rod Welding & Engineering Bomber C Main was run for the first time this year. A late caution for a spin by Chad Ingram would tighten the field for a short run to the finish in which Josh Overmeir was able to hold off Joe Overmeir to pick up the victory. Derrick Roseman started at the back and came home with a third place finish. Ingram recovered for fourth with Brandon Goad fifth. 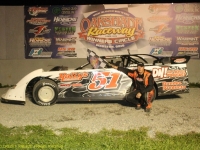 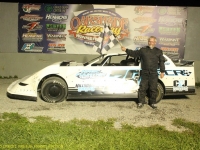 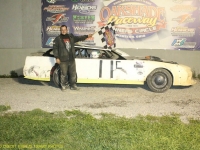 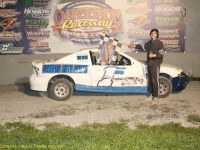 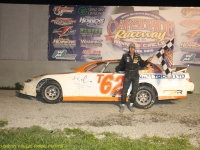 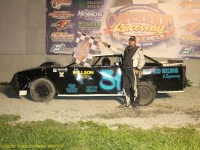