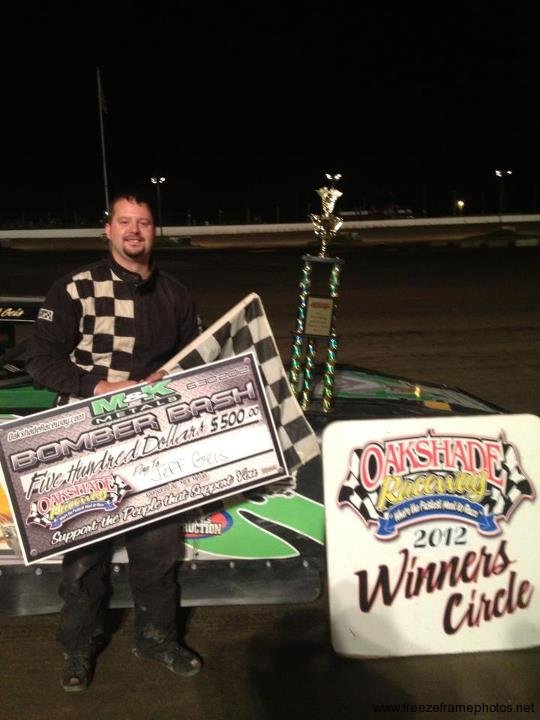 Oakshade Raceway hosted a jam-packed weekend of racing highlighted by Jeff Geis leading the entire distance of the Second Annual M&K Metals Bomber Bash on Saturday night, and then John Brooks earning his second 200-lap enduro win of the year on Sunday afternoon.

Saturday evenings racing started off with some make-up races from last weekend’s rain-shortened event. The first feature of the night was the UMP Sportsman. Joe Derbeck started on the outside of the front row and led all 20 laps. Jamie Grochowski, Bruce Stuart, Bob Gregory and Tim Line had a heated battle for second early in the race with Stuart eventually taking the position. A long green flag run allowed Derbeck to begin lapping cars running near the tail of the field. Stuart began to close in as both drivers raced hard through the slower traffic, but Derbeck held on to pick up his first feature win of the season. Bruce Stuart settled for second followed by Matt Lindsey, Tim Line and Bob Gregory.

Next up, seventeen-year-old William Cundick held off Drew Smith while maneuvering around a slower car in the final corner to earn his second consecutive Hornet feature event win in a make-up feature from last week. Finishing third behind Smith was Maverick Wright. Josh Froelich finished fourth and Cody Laney was fifth.

The UMP Sport Compact was the final make-up feature event. Trent Delong wasted no time in grabbing the lead and then dominating to pick up his fifth feature win of the year. Derek Morris was running second most of the race and began to fade as his car began smoking. Regan Ford caught Morris and was just about to complete the pass for second when Morris got into her causing Ford to spin. That allowed Jeff Girdham to finish second. Ford got going and finished third with Stephanie Miller fourth. Morris received the black flag and was credited with a fifth place finish.

Later in the night after all the heat races, consolation events and intermission, it was time for the M&K Metals $500 to win Bomber Bash. Jeff Geis started on the pole of the 20-lap feature and immediately took the lead. Dave “Gumby” Golembiewski Jr. spun in turn one to bring out the first caution flag of the race. Craig Dippman and Tim Line were running second and third just behind the race leader when the two made contact with each other on lap seven and both suffered flat tires forcing them to the pits under green.

One lap later Randy Murday got together with Amy Bernard sending her car spinning to bring out another caution. Both drivers were racing in the top five. Bernard was charged with the caution and sent to the tail, as was Murday for rough driving. Murday retired to the pits instead.

Jeff Foks, with eight UMP Bomber A Main feature wins this season, began to pressure Geis for the lead shortly after the halfway point of the race. Foks was glued to his rear bumper and looked high and low to try to find a way to get by Geis, but couldn’t make the pass. It was the first feature win of the year for Geis. Foks settled for second followed by Adam Noonan and Justin Gamber who started 17th. Also having a nice run was Dave “Gumby” Golembiewski Jr. who ended up fifth after restarting last after his early caution.

A good field of UMP Late Model drivers fought to make the 20-car feature starting lineup. Steve Kester started on the pole and led the first lap. Devin Shiels took a turn at leading starting on lap two. He held on to the top spot until just after halfway when Casey Noonan charged to the front. Shiels began to slip back which allowed Dona Marcoullier and eventually Rusty Schlenk to get by. Marcoullier, hungry for his fourth feature win of the year, began to pressure Noonan for the lead. He made one last attempt for the lead, diving the inside of Noonan in turn one on the final lap. Noonan held tough and earned his first feature win of the year with Marcoullier finishing second. Oakshade Late Model point leader Rusty Schlenk finished third followed by Shiels and Zack Olger.

The UMP Sportsmen hit the track for their second feature of the night. Mike Jessen got by Joe Smith on lap three and then pulled away with the lead. Matt Lindsey began to close in Jessen the second half of the race and eventually caught him, but Jessen was too strong and held on to win his first feature of the year. Following Lindsey in second was Richard Patton who posted a strong third place finish after starting 11th. Bob Gregory and Tim Line were the rest of the top five finishers.

Thirteen-year-old Maverick Wright led the entire distance of the second Hornet feature race. Cody Laney got turned hard into the backstretch wall after contact with Josh Froelich on lap four which brought out the only yellow flag of the race. Wright became another first time winner after holding off William Cundick for the win. Drew Smith was third followed by Brandon Myers and Taylor Dippman.

There was a little more excitement in the second UMP Sport Compact feature. Trent Delong got the lead from Derek Morris on the second lap of the race and then pulled away. Delong seemed to fall off the pace which allowed Morris to close back in. Morris got back to the inside and the two raced side by side for the lead. Jeff Girdham was running off the pace when the leaders caught him in turn four. Neither Morris nor Delong backed off and turned Girdham sideways across the front of both of their cars. They pushed him halfway down the front straight and continued on leaving Girdham stopped which brought out the yellow flag with two laps to go. Delong went on to post his sixth UMP Sport Compact feature win of the year with Morris a close second. Regan Ford finished third and Girdham continued on to finish fourth. Stephanie Miller was fifth.

Garry Domoe gave himself a win for a birthday present in the M&K Metals Bomber B Main. Domoe got by Scott Robertson for the lead on lap eight and didn’t look back on his way to the checkered flag. Terry Rushlow finished second and Roscoe Stetten took third after starting back in 14th. Robertson slipped back to finish fourth with Donovan Paskan fifth.

John Kulikowski led the first part of the UMP Bomber C Main until he and Jamie Faller made contact while racing for the lead. Greg Whitehead took advantage and drove by both on the outside. Whitehead went on to pick up the victory over Shaun Sharp, Jon Bates, John Kulikowski and Gene Potridge.

After all that racing Saturday night, fans, drivers and crews came back on a beautiful Sunday afternoon for another of the 200-lap enduro races.

Mark Henderson led the field on to the heavily watered track at the start, but Nick Katerhenry was quick to grab the early lead by lap 25. He maintained that position the first quarter of the race, but a flat tire would put him back in the running order.

John Brooks wasn’t the fastest car all afternoon, but was the most consistent and took the lead by the 75 lap mark. He kept out of trouble and continued to lead the rest of the distance. Brooks opened up a five lap lead over his nearest competitor and won his second 200-lap enduro of the year. Brian Plotts finished just ahead of Ronnie Bloomfield Jr. for second. Both drivers completed 195 laps. Shawn Valenti had been as high as second early in the race and then slipped back to sixth just past halfway. He recovered to finish fourth, completing 193 laps. Jeremy Grover was fifth with 190 laps complete. 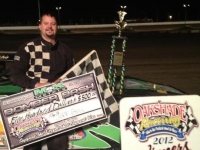 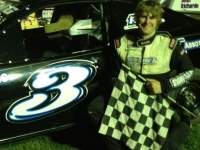 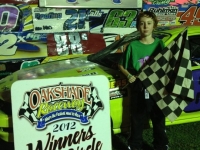 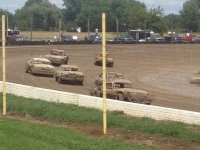 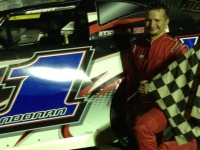 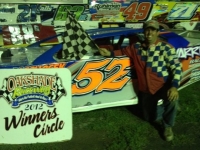