WAUSEON, OH – Sponsors from the Team 97 late model pitched in to up the payout for the Oakshade Raceway UMP DIRTcar Late Model feature event to $2,000 to win and $200 to start on Saturday night. Holland Ohio’s Steve Kester would gladly accept the $2,000 after earning his second consecutive feature win which also moved him to the top in the Oakshade late model point standings.

The Get-It-Done Auto Parts, Select Sanitation Service, Childress Collision, Barn Restaurant, Accelo Raceway, Dippman Motorsports and Warpaint Graphix sponsored late model main event was marred by multiple caution periods. Kester jumped out in front of all the trouble on the first lap after starting on the outside of the front row. Dusty Moore appeared to get the advantage over Kester on one of the early restarts after Kester chose to restart on the outside lane. Luckily for him the caution flag flew before another lap could be completed, saving the lead for Kester who opted for the inside line on the next restart.

The Oakshade UMP DIRTcar Late Model point leader Jake Rendel had worked his way up to second with Chris Keller and Dusty Moore knocking at his back door. The action got a little too tight in turn four resulting in Keller and Moore spinning out sending both drivers to the back for the restart. Rendel, Jeff Geis and Garrett McClain got together on the next restart while battling in the top five. Geis and McClain stopped on the track while Rendel continued on. More trouble for top five cars happened on lap 10 after Devin Shiels had issues coming off turn four ending his night after he had worked his way up to third. Rendel’s night got worse a couple laps later as his car slowed on the track and then retired to the pits. All of this action occurred before reaching the halfway point in the 25-lap race.

With less then half the field left, the last half of the race ran pretty clean with Casey Noonan pestering Kester for the race lead. In the end, Kester was able to prevail with Noonan finishing a close second. Steve Miller transferred in to the main event through the last chance race, spun out on lap four and still managed to work up to an impressive third place finish. Bob Mayer finished fourth and Dusty Moore worked his way back from his earlier troubles to finish fifth.

The UMP DIRTcar Sportsman feature was also slowed by multiple caution periods. Last week’s feature winner Bruce Stuart took the early lead after starting on the pole. Point leader Rusty Smith would take command just before the halfway point in the race. The Sylvania, Ohio, driver hadn’t visited the Oakshade Winner’s Circle since June 20, but Smith was able to hang on and pick up his fifth feature win of the season. Brandon Gregory had been closing the point battle since the beginning of July with a string of five straight feature wins. He lost a little ground with his second place finish. Josh Robertson finished third followed by B.J. Gregory and Jake Gamber.

Rich Riffe out of Toledo, Ohio, wasted no time in getting to the front of the Hot Rod Welding & Engineering Bomber A Main. He passed pole-sitter Cody Stetten for the top spot by the completion of lap one. Riffe went on to pick up his second consecutive A Main win, his sixth on the season. Jeff Foks Jr. trails Riffe in the point standings and lost just a little ground finishing in the second position. William “Bubba” Cundick posted a third place finish with Cody Stetten and Adam Noonan rounding out the rest fo the top five finishers.

Pole-sitter Ken Watts and Joe Carr made some heavy contact ending both of their nights early in the Compact feature event. Joe Elliott and Eric Carr had a great battle for the lead coming to the checkered flag with Carr picking up his first feature victory of the season. The Wauseon, Ohio, driver had been leading the points with consistent finishes, but now can add a feature win to his 2020 resume. Elliott is second in points and had to settle for a close second place finish. Aaron VanPelt’s win streak was cut short at just two after he ended up finishing third on Saturday. Mark Barrick and Megan Elliott rounded out the rest of the top five.

Dylan Burt started on the pole of the evening’s final main event, the Hot Rod Welding & Engineering Bomber B Main and led the first part of the race. A hard-charging Adam Lantz closed in from his 11th starting position and took the lead on the high side down the backstretch on lap four. Lantz, from Wauseon, Ohio, went on to claim his third B Main win of the year with Donnie Ringman finishing second. Burt held on to finish third with Roscoe Stetten fourth. Brian Miller started fifth and finished fifth. 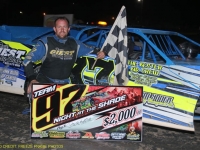 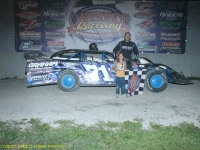 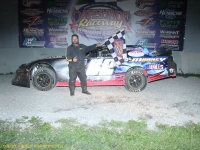 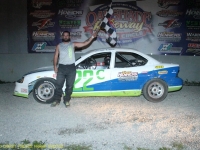 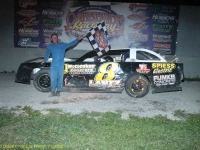 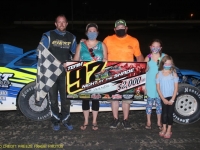