Racing returned to 3/8 mile dirt oval at Oakshade Raceway after last week’s rain out with Wallace Racing Products night in which Casey Noonan claimed his third feature win of the season.

Devin Shiels started on the pole of the 25-lap Wallace Racing Products UMP Late Model feature event and led the majority of the race. A few laps after a lap 17 debris caution, Noonan finally took command with defending track champion Brian Ruhlman following into the second position. Noonan, out of Sylvania, Ohio, went on to pick up the victory with Ruhlman finishing second. Shiels slipped back to finish third followed by Wayne Chinn and Steve Kester.

Jamie Grochowski led the early goings of a very exciting Wallace Racing Products UMP Sportsman feature race. Grochowski started on the outside of the front row and immediately got out in front of pole sitter Rusty Smith. The two drivers battled for the lead the first half of the race. Rich Ruff from Adrian, Michigan, had his car hooked up on the high side and joined the battle for the lead with some three-wide action beside Grochowski and Smith. Ruff appeared to take the lead on lap 12, but a caution flag flew and reset the field to the previous lap giving the lead back to Grochowski. Ruff regrouped and after some more three-wide racing for the lead Ruff got out in front on lap 15 only to have another caution flag come out and relegate him to second for the restart. Once back under green flag racing, Ruff and Smith finally disposed of Grochowski and the two drivers raced side by side the final couple laps with Ruff using the high side coming off turn four to power out in front of Smith for a very exciting finish. Billy Brown came on strong near the end of the race and finished in the third position with Grochowski fading back to fourth. Tim Fisher finished fifth.

Next out was the Wallace Racing Products Bomber A Main. Roscoe Stetten and Tim Hancock battled hard for the eary race lead, but Gregg DeTray closed in to make it a three car battle. Multiple caution flags in the first three laps kept the field tight with Detray finally getting by Hancock for the lead mid way through the race. Holland, Ohio’s Jeff Foks quickly marched toward the front after starting in the middle of the pack and got to the outside of Detray. The two drivers raced side by side for the lead all the way to the checkered flag with Foks coming out on top for his second consecutive A Main win and his third win of the season. Hancock held on to finish third with Chris Sands gaining nine positions from the start to finish fourth. Stetten ended up fifth.

Richard Riffe wasted little time in getting to the front of the Wallace Racing Products Sport Compact feature event. The Toledo, Ohio, driver took the lead at the start after starting inside the second row. He shot out to a big lead and worked through lapped traffic late in the race to pick up his third feature win of the season. Cory Gumm held off Brogan Rehklau for second with Matt Brazeau and Carter Murday rounding out the rest of the top five finishers.

Dean Taylor got out in front of Dan Shaffer at the start of the Wallace Racing Products Bomber B Main. Teri-Lynn Murphy from Holland, Ohio, worked her way quickly up to second and then dove to the inside of Taylor. The two drivers touched as they exited turn four and Murphy took the lead, but a caution for a couple cars that spun would knock her back to second behind Taylor for the restart. The two drivers battled all the way to the final corner with Murphy coming out on top. Cody Laney was able to get by Taylor to finish second after Taylor’s car pushed real bad coming off the final corner. Taylor wound up third.

Toledo, Ohio’s Jason Grames led a mad scramble at the start of the Bomber C Main with Jeff Robertson, Brennen Mellon and Scott Robertson pressuring. Jeff Robertson manage to take the lead for a short time, but Grames fought back and then had to fend off Scott Robertson. Grames survived a collision with Chris Yokum who was running at the back fo the field and held on to win with Scott Robertson finishing a close behind. Mellon finished third, but had the rear end ripped out from under his car after contact with a lapped car right at the finish. Brian Barden was fourth with John Reichow fifth.

Oakshade Raceway has a big event on tap for Father’s Day weekend. It’s the 27th Annual Barney Oldfield Race/American Late Models Series event paying $5,200 to win on Saturday night. The UMP Sportsman, Bomber and Sport Compact class will also be in action. Gates open at 4pm with racing at 7pm. 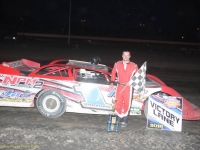 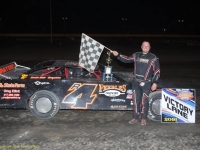 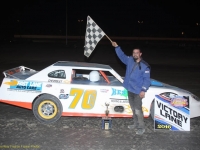 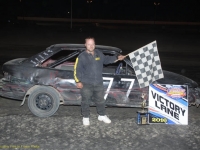 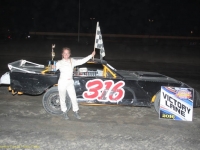 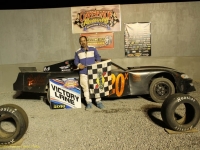