Schlenk started on the pole and grabbed the early lead over Ryan Unzicker in the main event. After opening up a decent lead early, Unzicker closed back in on Schlenk in lapped traffic and was about to take the lead on lap 18 when Brent Larson was spun just in front of the leaders to bring out the yellow flag. Schlenk led the field back to the green with Pierce in third. A couple laps later Pierce was able to overtake Unzicker for second and then set his sights on Schlenk. With Pierce close behind, Schlenk made some contact with the car just in front of him that was trying to stay on the lead lap which forced Schlenk to check up. At the same time, Pierce dove to the inside to take the lead away on lap 32. Schlenk regrouped and closed back in on Pierce and was able to get back up beside him with three laps to go. Pierce would fend off the challenge and pick up the $5,000 check for the win. Schlenk settled for second with Unzicker third. Cody Mahoney finished fourth with last year’s Birthday Race winner Jon Henry fifth.

Nick Hoffman from Mooresville, North Carolina, swept the two Summit Racing Equipment Modifieds Summer Nationals races at Oakshade Raceway last year. Hoffman had the car to beat early in the Modified feature this night, but another North Carolina driver would spoil his bid at a third consecutive Oakshade win. Taylor Cook from Stanley, North Carolina got to the inside of Hoffman to snatch the lead away on lap 14. Cook then set sail, opening up a big lead over Hoffman who was battling with Brian Ruhlman for second. Ruhlman was able to get by Hoffman for second at one point, but Hoffman battled back. Cook went on to the easy win with Hoffman finishing second ahead of Ruhlman. Jamie Lomax finished fourth followed by Tom Conrad Jr. and NASCAR Camping World Truck Series regular, Matt Crafton.

More Summer Nationals racing action is on the way for Saturday, July 15. The DIRTcar Summer Nationals Late Model Finale will be the19th Annual Oakshade Raceway Birthday Race paying $10,000 to the winner. The Summit Racing Equipment Modifieds will be racing for $1,500 to win and the Compacts will also be in action. Gates will open at 10am and the pits will be open to anyone with a grandstand admission until 4pm to meet the drivers. Hot laps will be at 6pm with racing at 7:30pm. 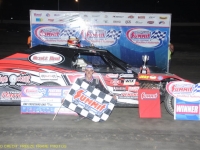 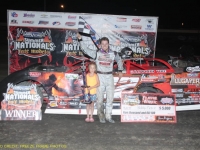