WAUSEON, OH – Rusty Schlenk earned his second consecutive feature win at Oakshade Raceway, which was hosting racing action for a second week without fans in the grandstands on Saturday night due to restrictions from the local health department.

Veteran racer Hillard Miller started from the pole of the UMP Late Model feature and led the first handful of laps with Schlenk and Steve Kester racing side by side for second. Finally the McClure, Ohio, driver disposed of Kester and went to work on Miller. The two drivers raced side by side a few laps with Schlenk finally getting the best of Miller from the bottom side on lap six. Several caution periods up kept the field tight until after lap 10 of the 25-lap main event. Then a long green-flag run allowed Schlenk to catch the tail of the field which almost cost him the race. Schlenk made significant contact with Brandon Moore as he tried to put him a lap down. Both drivers continued on. A couple of late cautions allowed Kester a shot at Schlenk, but for the second week in a row, no one would catch him. Jake Rendel finished off a strong run with a third place finish followed by Casey Noonan in fourth. Hillard Miller held on to finish fifth.

A caution-filled UMP Sportsman feature followed with Rusty Smith eyeing his second consecutive feature win from his fourth starting position. It was Jake Gamber out front early at the drop of the green flag before a series of yellow flags would slow the competition. Smith, out of Sylvania, Ohio, took second from Bruce Stuart and then went to work on Gamber and appeared to take the lead, just as the caution flag flew again on lap four saving Gamber. After the restart, Smith went to work to the inside of Gamber and a few laps later, took over the race lead for good. Brandon Gregory worked his way up to finish second after starting eighth with Mike Jessen ending up third. Matt Ringer took fourth and Stuart slipped back to finish fifth.

The Bomber A Main started with the yellow flag on the first lap for an incident involving Scott Hammer, Jeff Foks Jr. and Gabe Mueller which resulted in a complete restart. Outside pole-sitter Jordan Conover would get out front and lead the field after the restart with last week’s feature winner, Rich Riffe, in tow. Riffe would slip way back through the running order on a restart after a mid-race caution. Conover would continue to lead and open up a big lead over Adam Noonan. A late race caution set up a three-wide battle for the lead between Conover, Noonan and Stryker, Ohio’s Kolin Schilt. Noonan slipped back to third as Schilt and Conover continued to race side by side to the checkered flag with Conover edging out Schilt by a nose at the line. Unfortunately for Conover, his car did not pass post-race inspection giving the win to Schilt. Noonan was credited with a second place finish followed by Riffe, Donovan Paskan and William “Bubba” Cundick.

Ken Watts set the pace early in the Compact feature event after starting on the pole. Last week’s feature winner Cameron Tusing would take the lead away from Watts about four laps in and then set sail to his second consecutive feature race win. Joe Elliott finished a distant second after starting deep in the field. Kevin Murday also started way back in the field and ended up third. Mark Barrick finished fourth with Watts slipping back to wind up fifth.

The night’s racing action wrapped up with the Bomber B Main. Jarrett Rendel darted out from the pole and led the entire distance with Ronnie Bloomfield breathing down his neck most of the way. A caution with two laps to go set up one final shot for Bloomfield to try to get by Rendel. A plume of smoke came out from behind Rendel as he took the white flag, but he was able to make it to the checkered flag ahead of Bloomfield and Chris Bleikamp. Shane Estes finished fourth with John Lonabarger fifth.

Oakshade Raceway is hoping to get fans back in the stands as soon as possible and will continue to follow guidelines and restrictions set forth by the local health department. Due to the rapidly changing conditions, please check oakshaderaceway.com or follow the Oakshade Raceway social media for the latest updates. As of press time, a full show of UMP Late Models, UMP Sportsman, Bombers and Compacts are on tap for Saturday, June 13. 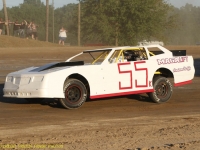 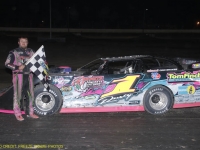 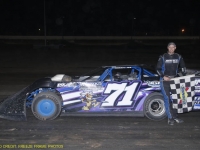 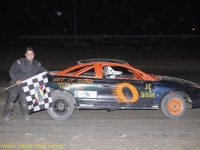 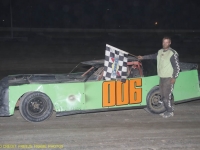