WAUSEON, OH – Season Championship Night at Oakshade Raceway produced four first-time champions among all four divisions. Steve Kester was the first to claim a title after a definitive win in the UMP DIRTcar Late Model feature.

Four drivers were mathematically vying for the Oakshade Raceway late model championship with Steve Kester leading the points as the night began. Kester finished second in his heat to one of those championship contenders, Casey Noonan. Unfortunately for Noonan, he would not make the call to start the main event.

Holland, Ohio’s Steve Kester, started on the pole of the 25-lap feature event, but trailed three-time and defending track Champion Devin Shiels for the first part of the race. Shiels was trying for his fourth consecutive track championship. Kester made the pass for the lead on lap 11 and never looked back. It was his third feature win of the season and his first ever track championship. Shiels finished in the runner up position in the race and in the point standings. Dusty Moore got back around Collin Shipley late to finish third with Shipley fourth. Jamie Grochowski climbed eight positions to finish fifth.

Bruce Stuart out of Adrian, Michigan, took advantage of bad luck for the top two drivers in the Oakshade UMP DIRTcar Sportsman point standings and earned his third win of the season. Point leader Rusty Smith started on the pole of the 20-lap feature event and Brandon Gregory, who was Smith’s only competition for the championship, didn’t make it out for the start. Smith led the first 16 laps but ran into trouble with a lapped car. The race leader ducked to the inside of Tino Perez going into turn three and Perez did not leave much room and the two drivers made contact as Bruce Stuart took the lead on the outside. Smith would fade back through the running order and ended up in the 10th position, but with the track championship. Stuart’s win leap-frogged him over Brandon Gregory to end up second in points. Josh Robertson finished the race in second followed by Jake Gamber, B.J. Gregory and George Lindsey.

Pole-sitter Adam Lantz pulled off to the pits on lap three of the Hot Rod Welding & Engineering Bomber A Main. Gabe Mueller and Jordan Conover from Forest, Ohio, battled for the lead with Craig Dippman closing in. Dippman and Conover made contact cutting down a tire on Dippman’s machine forcing him to the pits. With three laps to go, Conover took over the race lead to earn his second A Main win of the year. Mueller had to settle for a second place finish with last week’s winner, William “Bubba” Cundick, finishing third. Jeff Foks Jr. gained eight positions to finish fourth with Tim Fisher rounding out the top five. Rich Riffe started deep in the pack and finished in 7th to earn his very first track championship.

Eric Carr came into the night with the Compact point lead and started on the pole of the main event. Cory Gumm, who has five feature wins this year, battled with the Wauseon, Ohio, driver early for the lead. Gage Allen made it a three-car battle at the front as he joined both Carr and Gumm out front. Contact between Carr and Gumm sent Gumm spinning on the backstretch, but Carr held on to win by a bumper over Allen in an exciting Compact feature event. It was Carr’s second feature win of the year and he earns the 2020 Compact track championship. Aaron VanPelt finshed third followed by Joe Elliott and Mark Barrick.

The Hot Rod Welding & Engineering Bomber B Main wrapped up the night’s racing featuring a few lead changes. Dylan Hough led the first few laps after starting on the pole. Dan Shaffer took command on lap four, but would roll to a stop under a lap seven caution. That put Hough back out front until he slipped up high with two laps remaining allowing Stryker, Ohio’s Josh Corkwell to get by and take the checkered flag. Hough settled for second followed by Jarrett Rendel, Josh McNicol and Duane Fletcher. 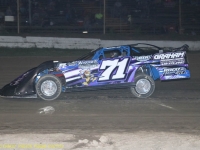 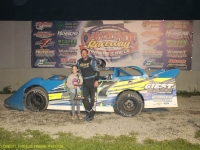 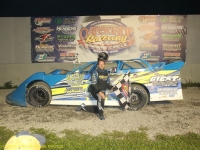 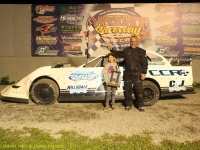 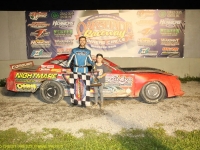 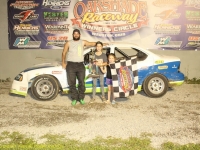 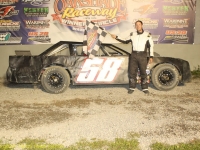