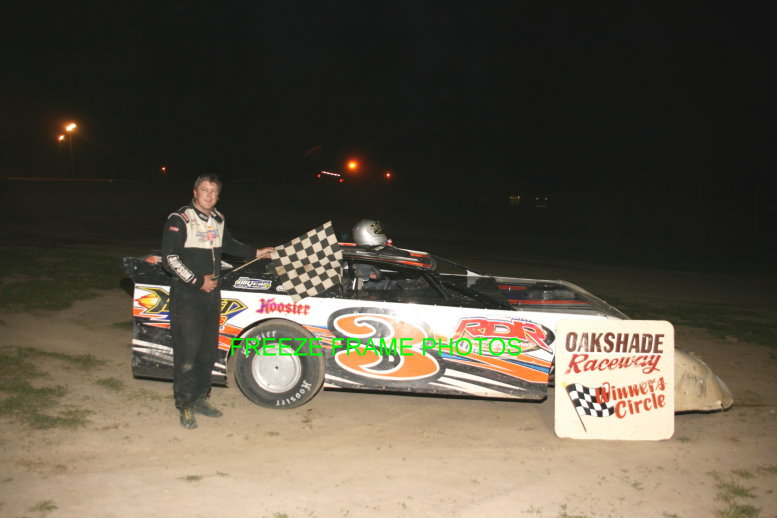 Rick Delong from Whitehouse, Ohio is heating up an exciting UMP Late Model points race early in the season at Oakshade Raceway holding off points leader Rusty Schlenk to pick up the feature win Saturday night.

Delong entered the night just seven points behind Schlenk unofficially in the UMP Late Model point standings at Oakshade and it didn’t take long for the 3D car to get to the front in the Late Model Feature after starting on the outside of the third row.

Kevin Reeve got the jump on Rody Schroyer at the start and led the first three laps until Delong ran him down and made the pass. Delong then began to pull away until the first and only caution flag flew on lap six after Ky Harper spun in turn two.

Delong opened up a big advantage on the rest of the field once again after the restart and appeared to be the class of the field. Rusty Schlenk started 14th and positioned himself in the top three with just a handful of laps left. Schlenk got by Reeve for second but ran out of time before he could try to reel in Delong.

Kevin Reeve held on to finish third ahead of Curtis Roberts and Chris Keller.

In UMP Sportsman action, Mike Jessen grabbed the lead from outside the front row early in the feature event with Josh Steinacker pressuring.

Steinacker had two second place finishes in the previous two events and was looking for his first win of the year. Steinacker took the lead from Jessen on lap three and finally looked like he was on his way to victory.

Rusty Schlenk was once again trying to play the role of the spoiler after starting deep in the field and working up to second a good distance back from race leader Josh Steinacker until a debris caution tightened the field with just two laps remaining.

Schlenk got to the inside of Steinacker for the lead on the restart and kept the pressure on in the final two laps, but Steinacker finally got his first win of the season and added to his UMP Sportsman points lead at Oakshade.

Mike Jessen had another respectable finish in third. The veteran Tim Fisher was fourth and Brian Fisher finished fifth.

Tom Ordway has been dominant in the UMP Bomber division at Oakshade this year with two consecutive A Main wins, but he would have his work cut out for him if he were to make it three in a row with having to start 12th.

Tim Shelley, Garry Domoe and Chris Henry put on a great show for the lead with Henry eventually getting by Domoe and Shelley by lap six. Domoe didn’t give up too easily and battled back along the outside of Henry, but Henry fended off the challenge.

Shelley, who led early, was involved in a wreck in turn one with Kyle Light which brought out the caution on lap 10. Jim Scout had worked up to the third spot on the track, but retired to the pits under the caution period.

Another late caution set up a one-lap dash to the finish with Chris Henry leading Domoe and Tom Ordway, who was now third.

Chris Henry, a Jackson, Michigan native, held on to take the checkered flag and his first A Main win of the year. Domoe took second and Ordway had to settle for third. Craig Dippman and Dan Dippman filled out the rest of the top five finishers.

A crash-filled Bomber B Main was up next that saw Jeff Geis jump to the lead at the start, but a yellow for Dave Sibberson, Mark Pollack and Billy Brown set up a complete restart in which Hugh Snell got the jump to the early lead.

Karl Spores Jr. assumed a short-lived lead on lap five. Spores got by Snell on the inside and thought he had him cleared. Spores moved up the track and clipped the nose of Snell which resulted in Spores spinning into turn one and he then got collected by Brad Blonde who managed to continued on.

During another caution period a couple laps later, race leader Hugh Snell retired from competition turning the lead back over to Jeff Geis with Rob Price in second. Those two drivers put on a heck of a race in the final laps with Price getting by Geis for the lead, but Geis dove back to the inside and won by the nose of his car at the finish line.

Kaleb Eck and Kenny Fiig made the start of the Bomber C Main interesting as Eck grabbed the lead at the start and then lost a wheel down the backstretch that Fiig found as he ran it over ending both drivers nights.

That allowed Jeff Krotzer to take over the lead on the restart until Rick Dixon got by on lap seven. Krotzer and Dixon traded some paint as Krotzer forced his way back into the lead, but Dixon fought back and took the lead for good on the next lap.

Make sure to include Oakshade Raceway in your Memorial Day weekend plans for the first $2,000 to win American Late Model Series show along with the UMP Sportsmen and UMP Bombers. It will be a fun night for the entire family as it is also the Links Zone Night of Wheels where a good number of kid’s bicycles will be given away. Gates open at 4pm with racing at 7pm. For more information, visit www.oakshaderaceway.info. 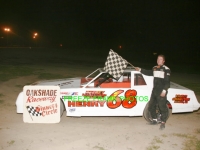 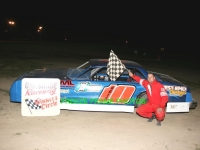 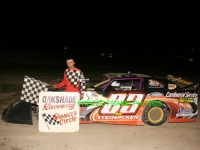 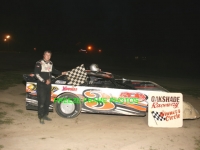