WAUSEON, OH – The 2020 edition of the Oakshade Raceway Papa Boiler Bomber Spectacular presented by Hot Rod Welding & Engineering lived up to the name producing some spectacular racing action with Wauseon, Ohio’s Adam Lantz taking the top honors. Thanks to Get-It-Done Auto Parts, MAGA LIFT and Posiflow by Slucket, Lantz took home $1,700 for the win and a brand new MAGA LlFT with battery worth $2,100.

Bomber Spectacular night is the only night during the season the Hot Rod Welding & Engineering Bomber class is the featured division at Oakshade Raceway with a 25-lap main event. Fifty-five cars entered to try to make the 21-car starting field. Last week’s feature winner, Jordan Conover, earned the pole starting position with Lantz lined up right behind him before the drop of the green flag. Conover darted out to the early lead with Lantz close behind. The two drivers battled hard side by side, swapping the lead and a little paint several times. Lantz finally edged out Conover for the lead on lap 12, but Conover fought back and regained the top spot on lap 15.

The epic battle at the front came to an abrupt halt on lap 17. The two lead drivers came up to lap the unofficial 2020 Bomber track champion, Rich Riffe. Lantz went to the high side while Conover ducked underneath Riffe, three-wide down the front stretch. Both drivers cleared Riffe, but Riffe got into the back of Conover and turned him around in turn one which brought out the caution flag. Riffe was black flagged for the incident. Adam Lantz was the leader once again with Kolin Schilt and last year’s Bomber Spectacular winner, William “Bubba” Cundick, third. Unfortunately Cundick would not repeat last year’s performance as the retired to the pits just before going back to green.

Late in the race, Schilt got turned around while in second on a restart with only four laps remaining, That brought out the yellow flag and forced him to restart at the tail. Several other drivers were caught up in the incident including Dan Dippman, Shane Estes, Roscoe Stetten and Cody Stetten.

Lantz went on to pick up the huge win with Jeff Foks Jr. gaining 20 positions to finish second after starting dead last. Foks also won the Hard-Charger award for his achievment. Craig Dippman finished third followed by Adam Noonan and Kolin Schilt with a nice recovery to fifth.

Dusty Moore got by Rob Anderzack for the lead on lap six of the UMP DIRTcar Late Model feature event. Moore could not hold off a hard-charging Rusty Schlenk who took the lead away on lap 12. Casey Noonan worked his way up to second and then appeared to have some kind of mechanical failure and spun to the infield on lap 14 which brought out the yellow flag. Schlenk, out of McClure, Ohio, went on to pick up his sixth Oakshade feature win of the year with Cody Bauer finishing second. Steve Kester started deep in the field after having to transfer in through the consi and ended up with a decent run to finish third. Colin Shipley ended up fourth and Moore slipped back to finish in the fifth position.

Brandon Gregory got back on track in the UMP DIRTcar Sportsman feature after getting a DNS (Did Not Start) in the Season Championship feature the week before. The Swanton, Ohio, driver got by the unofficial track champion, Rusty Smith, for the lead on lap seven and darted out to his sixth feature win of the year. The brothers Gregory made it a one, two finish with B.J. Gregory taking second. Smith slipped back to finish third followed by Chris Keller and Josh Robertson.

The unofficial Compact track champion, Eric Carr, had a great battle with Hillsdale, Michigan’s Cory Gumm for the lead the first half of the Compact feature event. The two drivers raced side by side at the front with neither able to get an advantage. Carr led lap one, but Gumm led laps two and three. Carr fought back to lead lap four, but Gumm got the lead for good on lap five and went on to post his sixth feature win of the year. Carr settled for second followed by Aaron Barrick, Tyler Sandahl and Joe Sandahl. 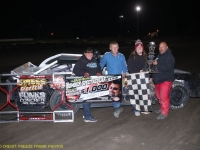 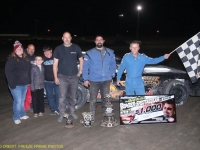 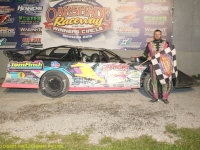 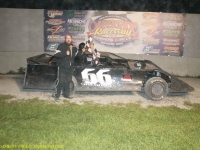 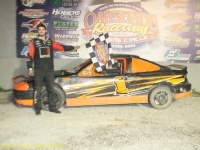