An emotional Dan Wallace captured his first ever UMP Late Model feature win at Oakshade Raceway which highlighted a spectacular night of racing on Saturday. The Vintage American Race Cars (V.A.R.C.) also made an appearance with one of their biggest classic race car counts which necessitated two separate feature events for some fun old-time racing action.

Once the V.A.R.C. features were complete, it was time to get down to business with the 25-lap UMP Late Model Feature. Last week’s feature winner, Casey Noonan, pulled out to a big lead after starting on the outside of the front row. Once Noonan caught slower traffic at the tail of the field, Dan Wallace and Devin Shiels began to close in. Just in front of the leader, a couple of cars got together in turn four which brought out the caution. Shiels had to make a quick right hand turn to avoid the incident, but he and the rest of the front runners got by without getting collected. A couple laps after the restart, Wallace, from Toledo, Ohio, got by Noonan to take the lead on the high side and never looked back on his way to pick up the easy victory. Shiels was able to get by Noonan as well to finish second after Noonan slipped back to wind up third. Steve Kester maintains a small lead in the Oakshade late model point standings after posting a fourth place finish and Matt Miller finished the race fifth.

Defending AmeriGas UMP Sportsman track champion Drew Smith made his first start of the season at Oakshade Raceway and started off his night by picking up his heat race win. The Sylvania, Ohio driver found himself chasing race leader Mathew Chapman the first part of the AmeriGas UMP Sportsman feature event. Chapman was working for his fourth feature win of the year, but Smith played the spoiler and took the lead away on lap eight of the 20-lap race. Several cautions kept the field tight, including one with just two laps to go. Chapman made every effort he could, but could not stop Drew Smith from taking the checkered flag a second time that night. Chapman settled for a second place finish with Josh Robertson capping off a nice run in third. Jerry Signor started on the pole and slipped back to finish fourth and last week’s feature winner, Rusty Smith ended up fifth.

Next out was the Hot Rod Welding & Engineering Bomber A Main which was marred by multiple caution flags including one red flag for a brief fire early in the race. Chris Henry has been dominant over the past few weeks and this week was no different. The Jackson, Michigan driver quickly drove to the front and was pursued much of the race by last week’s B Main winner, Donovan Paskan. Henry went on to post his fourth consecutive A Main win. Hot Rod Welding & Engineering Bomber point leader Jeff Foks Jr. finished second followed by Rich Riffe and Adam Noonan. Paskan faded late in the race and ended up fifth.

Jeff Goodman started deep in the Compact class feature race, but was able to get to the front and pick up his first feature win of the year. Goodman, out of Wauseon, Ohio, currently sits third in the point standings. Aaron Van Pelt started on the pole and held on to finish second followed by Aaron Barrick, Todd Drewes and Joe Elliot.

The final race of the night was the Hot Rod Welding & Engineering Bomber B Main. Gabe Mueller led much of the race after starting on the pole, but a jumping the start penalty would relegate him to restart third after a late race caution. Tim Hancock from Malinta, Ohio, went on to pick up the victory with Curt Dickie finishing second. Mueller settled for third followed by Roscoe Stetten and Scott Hammer.
The biggest weekend of the race season at Oakshade Raceway is coming up this Friday, July 13th and Saturday, July 14th with the DIRTcar Summer Nationals rolling into town for two evenings of racing. It is the final two nights of competition for the month-long DIRTcar Summer Nationals Late Models, otherwise known as “The Hell Tour” and the Summit Racing Equipment Modifieds will also be in action both nights. The late models will be racing for $5,000 to win on Friday and $10,000 to win in Saturday’s annual Oakshade Raceway Birthday Race. Compacts will also be in action on Saturday night only.

Gates will open at 10am on Friday morning with racing slated to start at 7:30pm. Gates will be open by 10am on Saturday as well and the pits will be open for everyone up until 4pm. After that a pit pass will be required to remain in the pits. Racing will once again start at 7:30pm. Camping will be permitted this weekend as long as posted rules are followed. 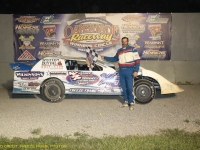 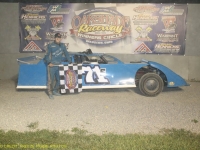 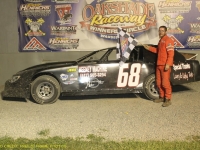 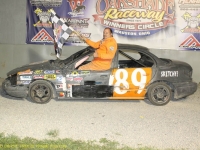 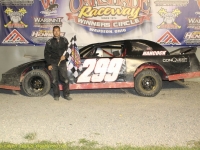