Shiels, from Britton, Michigan, started on the pole of the 25-lap feature event and led flag to flag. It was already a warm summer night, but things heated up just a few laps in with a big pile up that involved Hillard Miller, Matt Lindsey, Ron Miller, Wayne Miller and the Oakshade point leader at the beginning of the night, Casey Noonan. With the backstretch blocked, the red flag was thrown. Noonan would not continue. Back under green, Chris Keller worked his way past Jon Henry for second and then tried to reel in the race leader. Steve Kester was running in the top five when he spun to bring out the caution with just four laps to go. Keller could not capitalize on the opportunity as Shiels went on to take the checkered flag. Henry held off Dusty Moore to finish third with Jake Rendel finishing fifth which vaulted him into the point lead, just one point ahead of Noonan.

Carter Murday slowed coming off turn four which stacked things up in the UMP DIRTcar Sportsman feature on lap three. Josh Robertson, Matt Ringer and Trever Miller were among those caught up in the incident. In the end, Brandon Gregory accomplished what only one other driver has done so far this season; beat Rusty Smith. The Swanton, Ohio, driver became just the third different sportsman feature winner this year. Smith’s second place finish keeps him atop the points chase. Josh Robertson recovered nicely after being involved in that early caution to finish third with Joel Morton and Jake Gamber rounding out the rest of the top five.

A big pile up marred the start of the Hot Rod Welding & Engineering Bomber A Main and brought out a red flag after William “Bubba” Cundick and Jarrett Rendel came together at the drop of the green flag. Drivers also collected in the incident included Tim Fisher, Scott Barnhart, Chad Ingram and Amy Clair. After a complete restart, the rest of the race went caution free. Gabe Mueller worked his way up to third place before dropping out of competition before the finish. In the end, Toledo, Ohio’s Rich Riffe drove to his second A Main win of the season after starting on the pole. Jeff Foks Jr. finished second with last week’s winner, Kolin Schilt, ending up third. Justin Gamber and William “Bubba” Cundick were the rest of the top five finishers.

The defending Compact track champion, Cory Gumm, earned his third straight feature win and tightened up the point standings. The Hillsdale, Michigan, driver is now third in points, just 16 behind leader Eric Carr who finished the feature race in second. Joe Elliott had worked his way up to third early in the race, but pulled out of competition a few laps later. That turned third over to Mark Barrick who went on to finish in that position ahead of Charles Hargett and Joe Carr.

Burt Sharp darted out to the early lead in the evening’s final event, the Hot Rod Welding & Engineering Bomber B Main. Sharp started on the outside of the front row and got the advantage over pole-sitter Ron Hulbert. Five laps in, Clayton, Michigan’s Donovan Paskan muscled his way into the lead and didn’t look back. It was his first feature win of the season. Curt Dickie gained four positions to finish second followed by John Lonabarger and Chris Bleikamp. Sharp slipped back to finish fifth.

Oakshade Raceway will host the annual visit from the Vintage American Race Cars (VARC) this Saturday, July 11. This will be in addition to a full racing program of UMP DIRTcar Late Models, UMP DIRTcar Sportsman, Hot Rod Welding & Engineering Bombers and Compacts. Gates open at 4pm with hot laps at 6pm and racing at 7pm. 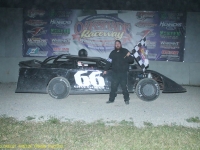 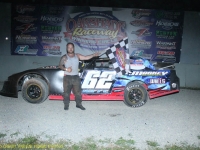 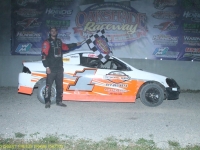 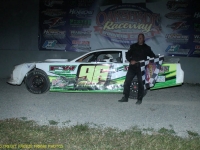 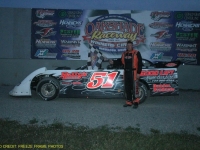