WAUSEON, OH – Two-time defending track champion Devin Shiels led from flag to flag in the UMP Late Model feature Satruday Night at Oakshade Raceway to pick up his second feature win of the season. The win slightly increases his point lead with only five point events remaining this year.

The Britton, Michigan, driver started on the outside pole of the 25-lap feature event and immediately darted out to the lead in front of Jake Rendel. Shiels would open up a big lead over the rest of the field with Steve Kester trying to chase him down. Late in the race, Shiels got held up behind some back markers trying to stay on the lead lap which allowed Kester to close in to within three car lengths, but that was as close as he would get. Finishing third behind Kester was Dan Wallace followed by Dusty Moore and Ryan Missler who started 10th.

Swanton, Ohio’s Bob Gregory got by UMP Sportsman track point leader Mike Jessen early in the feature event for the race lead. Gregory went on to an easy win, his second of the season. Jessen held on to finish second with Josh Roberton third. Jake Gamber finished fourth and Joe Smith climbed from his 11th starting position to finish fifth.

Jeff Foks Jr. earned his third Hot Rod Welding & Engineering Bomber A Main win of the season which moved him into second in the track championship points. Point leader Terry Rushlow, Adam Noonan and Foks are all within eight points of each other. Foks, from Swanton, Ohio, got the lead of A Main right at the start and never looked back. The battle for second was exciting, a good distance back from the race leader. Amy Clair and Roscoe Stetten raced each other hard with Clair ending up second and Stetten third. Adam Noonan started 12th and finished fourth followed by Cody Houston who started even deeper in the field in 16th to finish fifth.

Cory Gumm has been dominant in the Napa of Swanton Compact class at Oakshade Raceway with this with six feature wins this year and the previous five consecutive. It appeared win number seven was on its way with Gumm taking the lead in the feature by lap two. Unfortunately for Gumm, he cut down a tire while trying to work through lapped traffic and fell off the pace. Wauseon, Ohio’s Eric Carr then took command and went on to pick up his first feature win of the year. Joe Elliott finished second followed by Cameron Tusing, Nathan Goodman and Jeff Goodman. Gumm limped to a sixth place finish.

Dan Bleikamp led much of the final event of the night, the Hot Rod Welding & Engineering Bomber B Main. Bleikamp started on the pole and led until Adrian, Michigan’s Cody Stetten, who started at the back of the field, made the pass for the lead and went on to pick up his first feature win of the season. Bleikamp held on to finish second. Ryder Price, Dave McMannamy and Derrick Roseman were the rest of the top five finishers.

Saturday, August 10th marks the rescheduled return of sprint car racing to Oakshade Raceway. After getting rained out in June, the B.O.S.S. non-wing sprints will be back in action along with UMP Late Models, UMP Sportsman and the Hot Rod Welding & Engineering Bombers. Gates opent at 4pm, hot laps are at 6pm and racing starts at 7pm. Adult general admission is just $14. 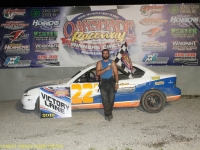 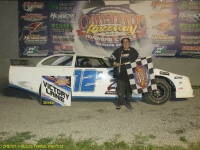 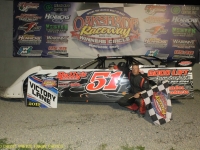 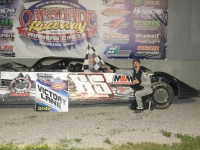 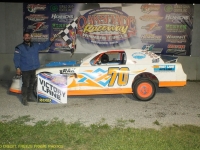