WAUSEON, OH – The final American Late Model Series (ALMS) event of the year at Oakshade Raceway showcased some spectacular racing, making for one of the most exciting feature events of the entire season which was won by Swanton, Ohio’s Dusty Moore.

Moore started on the pole for the 30-lap ALMS main event and jumped out to the early lead with Casey Noonan pressuring. Just three laps in, the red flag flew after Chad White barrel rolled on the backstretch. White, who entered the night second in ALMS points, was able to drive his car back to the pits, but did not return to the race. After the ensuing restart, both Noonan and Ryan Missler got to the inside of Moore and raced several laps three-wide for the lead. The caution flag flew just after the halfway point in the race and Noonan took advantage on the restart. Noonan was able to take the lead from Moore on lap 18, but Moore fought back regaining the lead one lap later and then pulled away from Noonan. Missler would eventually get by Noonan for second and began to chip away at Moore’s lead, catching him with just a couple laps to go. The two drivers raced side by side while working through slower traffic. An ecstatic Dusty Moore held on to prevail and took the giant $2,000 ALMS feature win check. Missler settled for the runner up position with Noonan holding on to third. ALMS point leader and last week’s feature winner, Rusty Schlenk, finished fourth with Devin Shiels rounding out the top five finishers.

In UMP Sportsman action, Jerry Signor was working toward his third consecutive feature win, taking the lead at the start of the feature event after starting on the outside of the front row. Signor built up a big lead over Joel Morton and the rest of the field, but it would not be enough. Brandon Gregory was working his way up through the field, but multiple caution periods kept setting him back. Finally, Gregory was able to get up to within striking distance of the lead and took command on lap 11. Gregory went on to pick up his third feature win of the year with Signor coming home second. Morton maintained a third place finish followed by B.J. Gregory and Mike Jessen.

Terry Rushlow added a couple points to his slim track championship point lead over Jeff Foks Jr. by picking up the Hot Rod Welding & Engineering Bomber A Main. It was the sixth A Main win of the season for the Holland, Ohio, driver. Foks, last week’s A Main winner, pressured Rushlow early in the race for the lead, but was not able to make it two in a row and ended up finishing second. Donovan Paskan finished third followed by William Cundick and Adam Noonan.

Hillsdale, Michigan’s Cory Gumm battled side by side with Nathan Goodman for the lead early in the Napa of Swanton Compact feature event. Gumm eventually cleared Goodman and set sail on his way to his seventh feature win of the year. Goodman maintained a second place finish followed by Eric Carr, Joe Elliot and last week’s feature winner Cameron Tusing.

A crazy Hot Rod Welding & Engineering Bomber B Main capped off the night’s racing action. John Lonabarger led the first three laps, but then pulled to the infield just as the caution flag flew for an incident involving Ryder Price and Jeffery Jessup. Those two drivers went to the tail for the restart. Steve Reeves inherited the lead, but Jessup worked back up to the front and ran down Reeves. He took the lead away at the white flag and was first to the checkered, but ended up being disqualified for having illegal tires. That turned the win over to Sherwood, Ohio’s Steve Reeves. Chris Bleikamp finished second followed by John Lonabarger who returned to the race to finish third. Dave McMannamy and Derrick Roseman were the rest of the top five finishers.

Oakshade Raceway will host the rescheduled Bill Reckner Memorial this Saturday, September 7 and Spiess Electric is throwing in some extra money for the A Main winners in the UMP Sportsman, Hot Rod Welding & Engineering Bombers and the Napa of Swanton Compacts. Gates open at 4pm with hot laps at 6pm and racing at 7pm. Adult general admission is just $14. 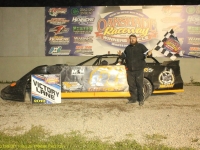 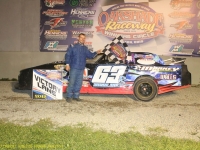 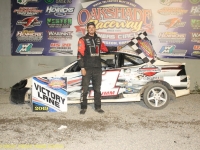 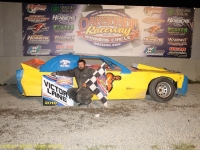 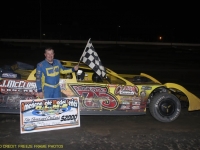