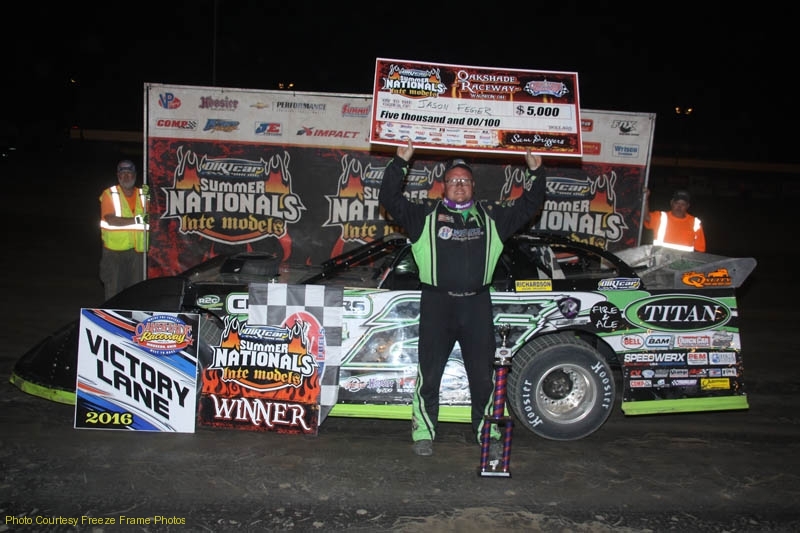 Jason Feger held off a hard-charging Ryan Unzicker to win the DIRTcar Late Model Summer Nationals event Friday night at Oakshade Raceway, part of a two-night event at the 3/8 mile track. Oakshade Raceway once again had the highest car count of all the series events with 50 late models.

Devin Moran jumped out to the lead at the start, but Bloomington, Illinois’ Jason Feger quickly closed in and passed Moran to take lead early in the 40-lap feature. Feger opened up a big lead until the only caution flag flew on lap 12 after Steve Kester got up into the front stretch wall. Ryan Unzicker restarted third and three laps later took the lead from Feger, but Feger battled back and reclaimed the lead one lap later. The two drivers would battle for the lead all the way to the finish. Unzicker closed in one last time and dove to the inside of Feger as they came off the final corner to the checkered flag with Feger just edging out Unzicker for the $5,000 win. Current Summer Nationals point leader Bobby Pierce fought off John Henry to finish third with Devin Moran slipping back to a fifth place finish.

The Summit Racing Equipment Modified Nationals were also in action. Brian Ruhlman got by Cory Daugherty for the lead on the second lap of the 25-lap feature event. Ruhlman appeared to have the car to beat early after pulling out to a big lead. Nick Hoffman from Mooresville, North Carolina, began to chip away at Ruhlman’s lead and caught him while working through lapped traffic. On lap 15, Hoffman passed Ruhlman and went on to pick up the easy win and $1,000. Ruhlman settled for a second place finish followed by Zack Schroeder and Randy Lines.

The 18th Annual Birthday Race/Summer National Finale takes place Saturday night July 16, paying $10,000 to win along with $1,000 to win for the Summit Racing Modifieds. The Sport Compacts will also be in action with gates opening at 10am and racing at 7:30pm. 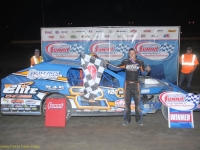 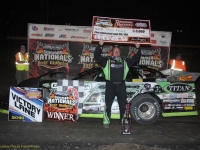