The Adrian, Michigan, driver started on the outside of the front row in the Central Collision UMP DIRTcar Late Model feature and drove out to a big lead early. A yellow on lap 11 for Steve Miller’s spin would be the first of a string of caution periods over the next six laps. That opened up some clear race track in front of Keller who had been working through some lapped traffic. In the end, Keller was the class of the field and picked up the checkered flag for the second time this season. Devin Shiels finished second and closed to within two points of Oakshade point leader Jake Rendel who finished the race in fifth. Ryan Missler took third in his 2020 debut at Oakshade Raceway. Mike Bores finished fourth.

Brandon Gregory had to work for his fifth consecutive UMP DIRTcar Sportsman feature win. The Swanton, Ohio driver started on the outside of the front row of the Central Collision feature event and had the lead by the completion of lap one. Multiple cautions kept the field tight behind Gregory. Pole-sitter Carter Murday was running second and pulled off the track on one of the restarts after it appeared something may have broke on his car. Point leader Rusty Smith got to the inside of Gregory to race side by side for the lead on a couple of occasions, but Gregory held on for the fifth feature win. Smith maintains his point lead with his second place finish. B.J. Gregory finished third after Bruce Stuart slipped up high and fell back to finish fourth. Josh Robertson was the fifth place finisher.

Rookie racer Kolin Schilt has been impressive. He started on the pole of the Hot Rod Welding & Engineering, Central Collision Bomber A Main and went on to earn his third feature win of the season. Gabe Mueller had a top five run going until he was caught up in an incident on lap six. Chane Stuckey pressured Schilt for the lead much of the race, but the Stryker, Ohio, driver held on for the win. Stuckey settled for second followed by Jeff Foks Jr. and Adam Noonan. Amy Clair started 15th and climbed 10 positions to finish fifth.

Aaron VanPelt out of Clayton, Michigan, broke Cory Gumm’s winning streak in the last Compact feature race at Oakshade. VanPelt started a streak of his own this week, earning his second consecutive feature win in the Central Collision Compact feature race. Gumm started seventh and moved up to finish second to VanPelt. Point leader Eric Carr ended up third followed by Joe Elliott and Mark Barrick.

The Hot Rod Welding & Engineering, Central Collision Bomber B Main wrapped up the night’s racing events with Adam Lantz putting on a dominating performance. The Wauseon, Ohio, driver started on the outside of the front row and led from flag to flag. Jarrett Rendel battled with Shane Estes to finish in the second position with Estes third. John Martis started at the back of the field and climbed to finish fourth with Burt Sharp rounding out the top five finishers.

The Buckeye Outlaw Sprint Series (B.O.S.S.) will make a stop at Oakshade Raceway this Saturday, August 15th, along with action from the UMP DIRTcar Late Models, UMP DIRTcar Sportsman and the Hot Rod Welding & Engineering Bombers. Gates open at 4pm with hot laps at 6pm and racing at 7pm. 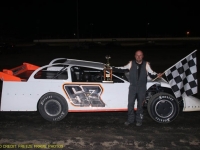 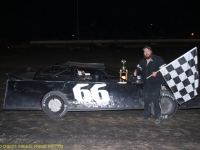 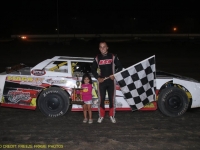 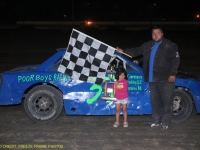 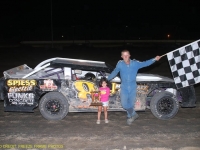