Holland, Ohio’s Steve Kester won the final UMP Late Model feature at Oakshade Raceway last season and picked up right where he left off, holding off defending Oakshade/Attica Late Model Challenge Series champion Devin Shiels to claim the very first feature win of 2018 at Oakshade. The Oakshade Raceway/Attica Raceway Park Late Model Challenge Series is a six-race point series with three events at each track over the season paying $1,000 to the champion.

Kester started on the outside of the front row of the Oakshade/Attica Late Model Challenge Series feature event and immediately darted to the lead over Shiels who had started on the pole. Ryan Missler had a bit of a scare about halfway through the race while running in the third position. The leaders were working lapped traffic and Missler’s car flew up in the air on the backstretch after contact with the lapped car of Megan Carpenter. Missler continued on and didn’t lose track position.

Multiple caution periods kept the field somewhat tight with Kester electing to start on the outside for each of the double-file restarts. As to why he wanted the outside on the restarts, Kester stated, “I knew I had a good run down the middle so I didn’t want to get shoved down on the bottom.”

Missler ended up finishing third behind Shiels. Brian Ruhlman and Dan Wallace rounded out the rest of the top five finishers.

Joel Morton looked strong early in the AmeriGas UMP Sportsman feature. He grabbed the lead at the drop of the green flag, but it didn’t take long for veteran driver Adrian, Michigan’s Tim Fisher to take over the top spot. Rusty Smith closed up behind Fisher in second and tried to put the pressure on for the lead, but Fisher was too strong and took the checkered flag. Mike Jessen started closing in on the leaders late in the race and settled for a third place finish followed Brandon Gregory in fourth. Morton slipped back to finish fifth.

Defending Hot Rod Welding & Engineering Bomber track champion Jeff Foks Jr. started off his season with an exciting A Main win over Craig Dippman. The two drivers battled for the lead most of the race, but Holland, Ohio’s Jeff Foks Jr. held on for the victory while Dippman slammed the front stretch wall as he crossed the finish line. Adam Noonan finished third followed by Curt Dickie and Tim Hancock.

Carter Murday couldn’t have asked for a better start to his season after picking up both his heat win and the feature in the compact class. Murday, out of Adrian, Michigan, started on the outside of the front row and battled with Eric Carr early. Jason Deshler took a wild ride, rolling his car over to bring out the red flag about halfway through the race. Cory Gumm finished second behind Murday with Carr falling back to end up third. Ken Watts and Mark Barrick finished fourth and fifth respectively.

Oregon, Ohio’s Taylor Dippman worked her way up to the lead of the final event of the night, the Hot Rod Welding & Engineering Bomber B Main after starting inside row two. Dippman held off a late charge from Dylan Burt who started near the back of the field to earn the win. John Martis overcame a bit of engine fire during hot laps to finish third in the B Main. Craig Turner was fourth and Chris Bleikamp was fifth.

Next weekend, Oakshade Raceway will host another full show of great racing action that includes UMP Late Models, AmeriGas UMP Sportsman, Hot Rod Welding & Engineering Bombers and Compacts. Since the Bill Reckner Memorial was rained out the previous weekend, those trophies will be awarded on this night to all classes but the UMP Late Models. Gates will open at 4pm with racing at 7pm on Saturday, May 12. 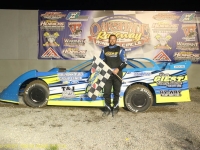 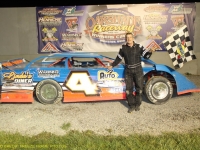 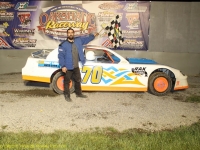 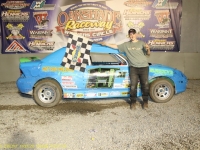 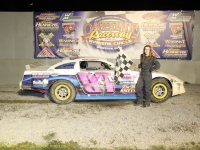