WAUSEON, OH – The 2020 race season at Oakshade Raceway started a few weeks late due to the pandemic. No spectators were allowed in the grandstands the first couple of weeks. Restrictions were eased a bit and limited spectators were then allowed for the rest of an exciting, action-packed race season which wrapped up Saturday night with some extra money on the line for both the UMP DIRTcar Sportsman and Hot Rod Welding & Engineering Bombers.

Several sponsors stepped up including Kester Mowing, LLC and Bruce Stuart Racing to increase the Sportsman payout throughout the field. That $700 to win feature ran as the night’s main event and provided for an exciting finish. Josh Robertson darted out to a commanding lead early in the race. Several cautions would tighten the field back up, but Robertson would pull away after each of the restarts. Unofficial 2020 track champion Rusty Smith would work his way up to second about halfway through the 25-lap many event and began to reel in Robertson’s P33 car. The two drivers race side by side with Smith getting the advantage with just two laps remaining. The Sylvania, Ohio, driver powered on to his sixth feature win of the season with Robertson settling for a disappointing second after leading all but the last two laps. Trever Miller finished third with Matt Lindsey moving up from his 10th starting position to finish fourth. B.J. Gregory ended up fifth.

Jeff Geis started on the pole of the topless UMP DIRTcar Late Model feature event and battled early with Garrett McClain for the lead. Late model drivers removed the roofs for this special “topless” event. Geis would lead the majority of the 25-lap feature event with lots of action just behind. Multiple caution periods kept the field tight which helped another Sylvania, Ohio, driver, Casey Noonan, who started 19th. Noonan worked his way up to third by lap 18 and three laps later drove to the outside of Geis to take the lead. He went on to pick up his first win of the season. Geis finished second with Dusty Moore beating Cody Bauer for third. The youngster, Colin Shipley, finished fifth.

The Hot Rod Welding & Engineering Bombers had a special Australian Pursuit Race sponsored by Dippman Motorsports before their main events. Toledo, Ohio’s Amy Clair started at the front of the 10 lap race where if you get passed, you are eliminated. Clair led all 10 laps to claim the $200 and a Hoosier tire. Cody Stetten held on to second and Gabe Mueller passed three cars to finish third.

Adam Lantz picked up right where he left off after winning last week’s Papa Boiler Bomber Spectacular by leading the entire distance of the 15-lap Hot Rod Welding & Engineering Bomber A Main. A generous fan put up an extra $60 to the winners of each the A and B Mains which sweetened the pot just a little bit more for the Wauseon, Ohio, driver’s third A Main win of the season. Rich Riffe, Jeff Foks Jr. and Gabe Mueller battled three-wide for second just a couple of laps from the checkered flag. Riffe came out on top of that battle and finished second to Lantz with Mueller third and Foks fourth. Pole-sitter Donnie Ringman slipped back to a fifth place finish.

Cory Gumm out of Hillsdale, Michigan, captured his second consecutive Compact feature win and his seventh of the season. The 2019 track champion started on the outside the front row and kept the rest of the field at bay. The unofficial 2020 champ, Eric Carr, was unable to reel in the #1 of Gumm and settled for a second place finish. Jeremy Wilbur, Kaleb Hinkley and Jason Wert were the rest of the top five finishers.

The Hot Rod Welding & Engineering Bomber B Main was the very last race of the 2020 season and had a lot of action throughout the field. Chane Stuckey and Dan Dippman occupied the first two positions for much of the race. Dippman appeared to lose the handle on his car late in the race and slipped back a couple positions in the final laps as Toledo, Ohio’s Chane Stuckey went on to win his second B Main of the year. Roscoe Stetten worked his way up from his 17th starting position to finish second and Shane Estes had a bit of a wild race to finish third narrowly avoiding a slower lapped car that crossed down in front of him coming to the checkered flag. Dippman ended up fourth with Burt Sharp rounding out the top five finishers. 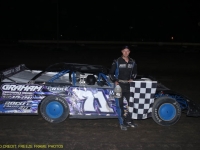 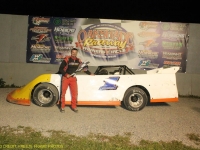 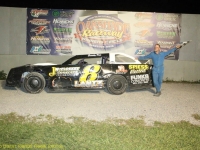 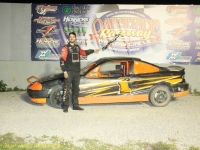 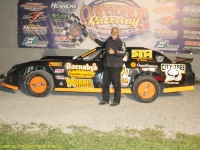