The youngster, Colin Shipley, led the first couple laps of the late model feature before slipping up high in turn two and opening the door for Jon Henry to take command. Rusty Schlenk, out of McClure, OH, began closing on Henry while the two drivers were working through heavy lapped traffic. Schlenk darted to the outside of a lapped car down the backstretch as Henry went to the inside. Schlenk came out on top with the lead on lap 17. A late caution flag flew on lap 21 of the 25-lap event after Michael Archer collected Dustin Sauter while trying to get to the pits at the end of the backstretch. That gave Schlenk and Henry clear race track for the final four laps. Schlenk went on to pick up his fifth Oakshade feature win of the season and a $1,750 pay day thanks to Cleveland Clinic. Henry settled for second after leading most of the race. Devin Shiels climbed from his 11th starting position to end up third with Shipley and Steve Kester rounding out the rest of the top five finishers.

Josh Robertson looked strong at the start of the UMP DIRTcar Sportsman feature, grabbing the lead after starting on the outside of the front row. Swanton, Ohio’s Brandon Gregory charged up to challenge Robertson for the lead after staring sixth. Gregory powered by on the outside to take the lead on lap eight and then set sail. Gregory went on to open up a half lap advantage over the second place battle to win his third consecutive feature which bumped him up to the Sportsman points lead. Joel Morton won the battle over Bruce Stuart for second. Matt Ringer finished fourth and Drew Smith started last and finished fifth.

Rich Riffe took off to a big lead early in the Hot Rod Welding & Engineering Bomber A Main. Adam Lantz got sideways while running in second just in front of Jeff Foks Jr. and Foks ended up spinning out which brought out the caution flag on lap seven. Kolin Schilt looked to the inside of Gabe Mueller while battling for fourth and got loose and spun bringing out another caution on lap 10. Riffe would go on to lead from flag to flag. It was the Toledo, Ohio, driver’s third straight A Main win and the fourth of the season. Mueller and Lantz raced side by side the final few laps with Lantz barely edging out Mueller at the checkered flag for the second position. Chane Stuckey posted a great finish, finishing fourth behind Mueller after starting 10th. Adam Noonan finished fifth.

Defending Compact track champion Cory Gumm, from Hillsdale, Michigan, started on the pole of the Compact feature event and battled with Aaron VanPelt early for the race lead. The only caution flag flew on lap 6 after Mark Barrick and Kevin Murday got together. VanPelt went back to work on Gumm, battling to his outside for the race lead after the restart all the way to the checkered flag with Gumm coming out on top for his fifth consecutive feature win. VanPelt finished a close second followed by Eric Carr, Joe Elliot and Abbey Werling.

Curt Dickie out of Lyons, Ohio, started on the pole of the Hot Rod Welding & Engineering Bomber B Main and led the entire distance. Multiple cautions kept the field tight. The first came out on the second lap after Dylan Burt and Brian Miller got together in turn two. Another incident brought out the yellow flag a handful of laps later after Scott Hammer and Jarrett Rendel got together while battling for third. Jamie Grochowski jumped in Amy Clair’s ride and had to start at the rear. By lap seven, Grochowski had moved up to second. Grochowski looked to the inside of Dickie for the race lead late, but Dickie held on to pick up the win with Grochowski a respectable second. Chris Bleikamp posted a third place finish with Burt Sharp fourth and Dave McMannamy fifth. 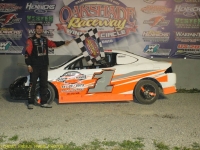 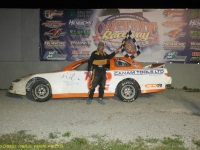 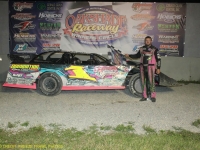 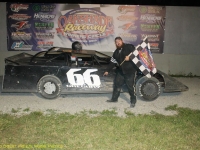 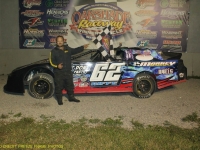