Casey Noonan started on the pole of the 25-lap UMP DIRTcar Late Model main event and snatched the early lead. Schlenk appeared to take the lead away on lap two, but a caution flag saved Noonan. It was the first of many caution periods in the event. A huge pile up on one of the restarts brought out the red flag early in the race. At least seven cars were involved. By lap five, Schlenk was able to finally get by Noonan for the race lead. A few more cautions kept the field somewhat tight with Jake Rendel eventually moving up to second. Jon Henry was running in the top five when his car suddenly slowed coming off turn two and collected last week’s feature winner Devin Shiels as well as Dusty Moore to bring out another yellow flag on lap 12. Schlenk, out of McClure, Ohio, went on to take the checkered flag and increased his lead in the Attica/Oakshade Late Model Challenge Series point standings. Rendel finished second and opened a little gap over Noonan in the Oakshade track point standings. Devin Shiels finished off a rough night with a third place finish after starting 10th, getting caught up in a caution and working his way back up from the tail of the field. Noonan slipped back to fourth with Steve Kester finishing fifth.

Joe Smith got around Bruce Stuart for the lead on the first lap of the UMP DIRTcar Sportsman feature event. Point leader Rusty Smith pursued him in second until something broke in the rear end of Joe Smith’s car on lap 12. Rusty Smith then assumed the lead and was looking for his fifth feature win of the season. Last week’s UMP DIRTcar Sportsman feature winner, Brandon Gregory, had other plans. Gregory, out of Swanton, Ohio, got to the outside of Smith and took the lead as the white flag flew on his way to his second consecutive feature win. Rusty Smith settled for second followed by Josh Robertson, Jake Gamber and Billy Brown.

Justin Gamber got the jump at the start of the Hot Rod Welding and Engineering Bomber A Main. Gabe Mueller, who started on the pole, was running second when he retired to the pits. Last week’s feature winner, Rich Riffe, took the lead from Gamber on lap six and pulled away. It was the Toledo, Ohio, driver’s third A Main win of the year. Five-time Bomber track champion Jeff Foks Jr. finished second. Adam Noonan started 12th and drove to a third place finish. Gamber slipped back to end up fourth with William “Bubba” Cundick rounding out the top five.

Cory Gumm and Eric Carr led the early going in the Compact feature event. Carr fell off the pace while running in second and ended up dropping to bottom of the running order. Gumm, out of Hillsdale, Michigan, went on to claim his fourth straight feature win which along with Carr’s bad luck, vaulted him into the Compact point lead. Joe Elliott finished second followed by Kevin Murday, Aaron VanPelt and Mark Barrick.

Clayton, Michigan’s Jarrett Rendel came out on top of a four-wide race for the lead at the start of the Hot Rod Welding & Engineering Bomber B. Multiple cautions kept the field relatively tight behind Rendel who went on to take the checkered flag. Scott Hammer finished second followed by Shane Estes and Josh Corkwell who recovered to finish fourth after being in an earlier caution. Derrick Roseman ended up fifth.

Also in action at Oakshade Raceway on Saturday night were the Vintage American Race Cars (VARC) who put on a show with some old-time racing machines. “Hurryin’” Hank Lower from Angola, Indiana, came out on top of the VARC feature event.

Oakshade Raceway will host another full racing program this Saturday, July 18 with a little more incentive for the UMP DIRTcar Late Models thanks to Cleveland Clinic. The winner of the late model feature will receive $1,750. UMP DIRTcar Sportsman, Hot Rod Welding & Engineering Bombers and Compacts will also be in action. Gates are scheduled to open at 4pm with racing at 7pm, but times may be adjusted back if the temperatures are extreme. Make sure to follow Oakshade Raceway on Twitter and Facebook and check OakshadeRaceway.com for the latest information. 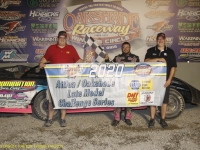 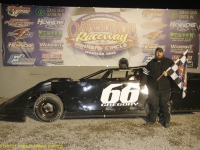 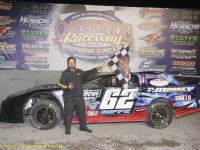 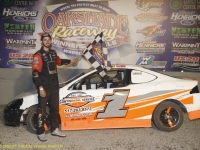 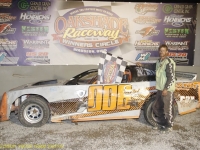