WAUSEON, OH – Oakshade Raceway finally kicked off the 2020 race season on Saturday night with a full field of competitors, but with no grandstand spectators per health department guidelines due to the Covid-19 pandemic. Even though no spectators were there to witness it, Rusty Schlenk was able put on a clinic and dominated the very first Oakshade Raceway feature event of the year.

The McClure, Ohio, driver started on the pole of the UMP Late Model feature and took off to an early lead. A couple early cautions for spins by Brad Wade, who had to borrow a ride from Steve Miller to start the feature, slowed the field twice within the first 7 laps of the 25-lap race. One final incident on lap eight involved Mike Bores, Jeff Geis and Brad Eitniear to bring out the yellow flag. After that final restart, Schlenk set sail with Casey Noonan moving up to second. He briefly made some ground on Schlenk while the leader was working through lapped traffic. The lead opened back up once Noonan started dealing with that same lapped traffic. Schlenk went on to easily capture the first checkered flag of the year at Oakshade Raceway. Noonan finished second with Steve Kester close behind in third. Jake Rendel had a strong top-five run the entire race and ended up finishing in the fourth position. Two-time defending track champion Devin Shiels had to transfer in to the feature through a consolation race, but he worked up from his 18th starting position to finish fifth.

Sylvania, Ohio’s Rusty Smith started on the outside of the front row of the UMP Sportsman feature and led from flag to flag after snatching the lead over Jake Gamber at the start. Gamber and Josh Robertson were battling for second when Gamber spun and collected Robertson sending both drivers to the tail for the restart on lap 10. Mike Jessen and Joel Morton then assumed second and third respectively behind Smith until Morten ended up spinning to bring out another caution. Earlier in the race, Smith had been able to pull away from the field, but he could not shake the 52 car of Mike Jessen who ended up finishing second about a car-length behind Smith. Bruce Stuart was caught up in an earlier caution and worked his way back up through the field to finish third with Josh Robertson and Karl Spoores rounding out the rest of the top five finishers.

William “Bubba” Cundick led the first part of the Bomber A Main after starting on the outside of the front row. Mechanical issues would knock him out of contention later in the race. Rich Riffe out of Toledo, Ohio, would take over the race lead late. He drove off to a big lead and the eventual win over a heated battle for second. Adam Noonan, Jeff Hinkley and Gabe Mueller duked it out to the checkered flag with Noonan earning the second spot followed closely by Hinkley and Mueller. Jeff Foks Jr. started deep in the field and finished fifth.

Toledo, Ohio’s Cameron Tusing started sixth in the Compact feature event and dueled with Eric Carr to get the lead and the victory. Kevin Murday held off Joe Elliott to finish third and pole-sitter Ken Watts ended up finishing fifth.

A caution on the first lap of the Bomber B Main resulted in a complete restart with Chane Stuckey getting to move up to the outside of the front row after originally be scheduled to start in row three. The Toledo, Ohio, driver took advantage of the situation and got by Jim Chapman to lead from lap one all the way to to the finish of the caution-filled race. John Lonabarger, who was part of the first caution, drove back up to finish in the second position followed by Kolin Schilt, Josh Corkwell and Josh Overmeir.

Please follow the Oakshade Raceway social media accounts or check the web site at oakshaderaceway.com for updates on future racing events at Oakshade Raceway due to the constantly changing guidelines because of the Covid-19 pandemic. 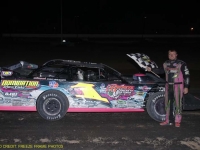 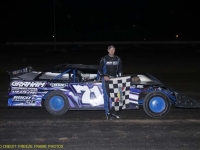 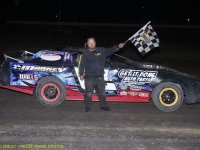 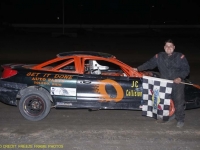 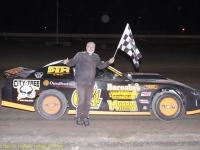