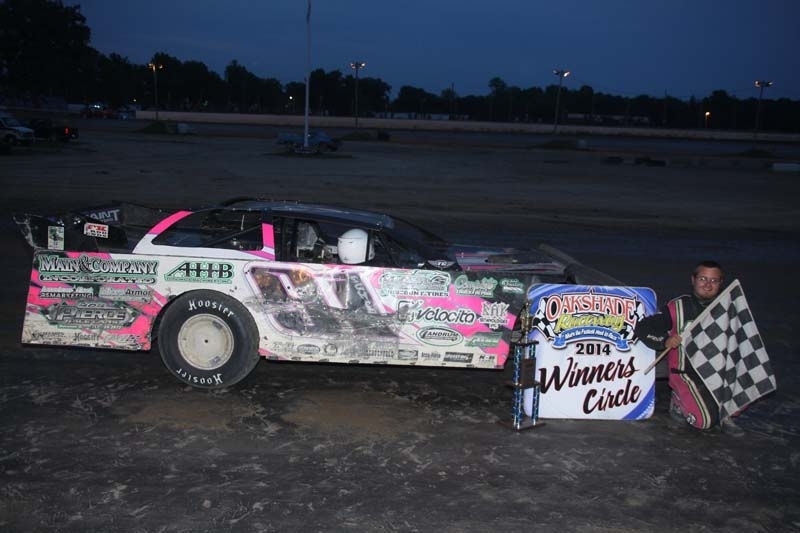 Veteran driver and two-time track champion Ron Miller led early in the main event with Rusty Schlenk and Brian Ruhlman challenging. Schlenk and Miller battled side by side for the lead for a couple laps, and Ruhlman joined in to make it a three car battle. Eventually Schlenk was able to get by and began to open up his advantage. Ruhlman began to close in while the leaders worked through lapped traffic. He had just about caught Schlenk when the caution flag came out late in the race. Schlenk was able to fend off Ruhlman to pick up his second checkered flag of the season. Ruhlman settled for second with Steve Kester third. Ron Miller finished fourth with Chris Keller was fifth.

Bruce Stuart was at the top of his game in the Wallace Racing Products UMP Sportsman feature race, taking over the top spot early after threading the needle through the middle three-wide coming off turn four. Jamie Grochowski was in close pursuit throughout the remainder of the race and although he could run with Stuart, he was unable to get alongside to make a bid for the lead. The win was Stuart’s first of the season. Grochowski finished second. Tim Line maintained his points lead with a third place finish despite suffering damage to his right rear early in the race. Last week’s feature winner, Bob Krumm, ended up fourth with Graeme Short fifth.

Terry Rump led early in the Wallace Racing Products Bomber A Main with Jeff Foks working the inside by the completion of the first lap. Foks took over the lead by lap two and opened up a bit of a lead. Chris Sands worked his way up to second after starting in seventh and began challenging for the lead. The two drivers battled side by side for several laps, but Foks was a just a bit stronger and held on to pick up his second consecutive feature win in an esciting finish. Sands settled for a close second followed by Craig Dippman, Terry Rushlow and Gregg Detray.

John Martis darted out to the front of the Wallace Racing Products Sport Compact feature event at the drop of the green flag. Nick Jenema quickly closed in and took command by lap two. Jenema then set sail and pulled away to what would have been an easy victory if it weren’t for a post race situation. There is a claim rule in the Sport Compacts at Oakshade Raceway and if a driver refuses a claim, the win is forfeited as well as all points. This was the case for Jenema who refused accept the claim. John Martis was then credited with the win with Cory Gumm second. Brandon Meyers was third. Cody Stetten and Brogan Rehklau rounded out the rest of the top five finishers.

John McGeorge started on the pole of the Bomber B Main and led the first lap with a mad scramble for position going on just behind him. Adam Lantz took over the lead by lap two and managed to hold off Steven Morris who battled him all the way to the checkered flag. Lantz held on to pick up his first ever feature win. Pete Herman finished third behind Morris. Colin Walker was fourth and Dan Shaffer wound up fifth. 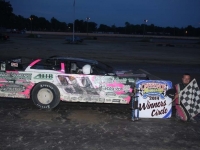 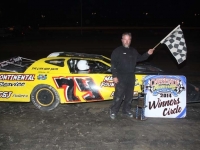 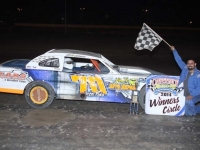 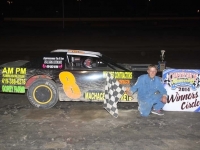 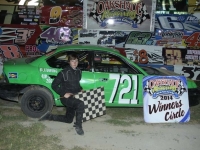