Memorial Night lap sponsorships at Oakshade Raceway meant a little extra money on the line for drivers leading sponsored laps in the A Mains and made for some great racing action. It was also the Night of Wheels where nearly 50 donated bikes were given away during intermission to a bunch of happy kids.

Among the highlights of the evening’s festivities was Britton, Michigan’s Devin Shiels earning his first feature win of the season in the UMP Late Models. At the start, it was Oakshade point leader Brian Ruhlman picking up the first couple laps’ sponsorship money until a hard-charging Rob Anderzack took the lead on lap three. Anderzack pulled away until he started to close in on the slower traffic running at the back of the field. The first caution flag flew on lap 11 after Anderzack got into Curtis Deisenroth, who was running at the back of the field, and turned him around at the end of the front stretch. After the restart, Shiels moved up two spots to take the lead with Mike Bores following him into second. A few laps later, Bores relinquished his position after his car slowed and rolled to a stop to bring out the yellow flag on lap 14, ending his night. Shiels continued on, opening up his lead and picked up the easy victory to become the fifth different UMP Late Model driver to win at Oakshade this year. Steve Kester finished second after starting ninth with Casey Noonan ending up third. Brian Ruhlman and Rob Anderzack slipped back to finish fourth and fifth respectively.

Billy Brown had a good run in the UMP Sportsman Memorial Night feature, leading the majority of the race and racking up lap sponsorship money. Unfortunately for Brown, Berkey, Ohio’s Mike Jessen was on a mission to earn his first feature win of the season and passed Brown for the lead on lap 17 of the 20-lap feature which ran caution-free. The former Sportsman track champion led the final three laps and took the checkered flag with Brown finishing a respectable second. Bob Gregory was third and one of last week’s Sportsman Twin 25 feature winners, Rusty Smith, wound up fourth. Joe Smith was fifth.

Tim Murphy found himself out in front early in the Bomber A Main Memorial feature ahead of some very stout competition. Murphy was able to maintain the lead until a lap six restart in which Gregg DeTray was able to motor on by. DeTray, out of Swanton, Ohio, led the remaining laps to pick up his second feature win of the year. Craig Dippman came out on top of a hard fought battle for second with Murphy. Bomber point leader Jeff Foks finished fourth with Chris Sands posting a top five finish after starting 14th.

Clint Urban snatched the lead at the start of the Sport Compact A Main, but an early caution flag would be his undoing. As the yellow flag flew for Paul Miller, Urban began to slow and got turned around sending him to the tail for the restart. That turned the lead over to Devin Goodman who led a good part of the race until Toledo, Ohio’s Richard Riffe took it away on lap five. He went on to extend his current win streak to four in a row and a total of six feature wins so far this year. Cory Gumm came home second followed by Cody Stetten, Devin Goodman and Nathan Goodman.

Rayce Price appeared to be on his way to a second consecutive Bomber B Main win, but came up just short. Price led every lap but the last with Cody Laney pressuring him most of the race. On the final lap, Price’s car fell off the pace in the final corners with the checkered flag in sight. Rick Dixon from Grand Ledge, Michigan, took advantage of the situation and drove on by to pick up the victory. Jarrett Rendel had an up and down race that ended with a second place finish. Laney ended up third with Justin Gamber fourth. Price was able to limp his ailing ride to a fifth place finish.

Jeff Goodman has had some pretty tough luck the past two weeks in the Sport Compact B Mains. Last week he rolled his car over. This week his night ended early after he lost a wheel on lap two. Toledo, Ohio’s Rick McDaniel had a bit better luck and led the entire distance after starting on the pole to earn the feature win. Kenny Wats finished second followed by Brandon Paskan and Cameron Tusing. Josh Profitt started near the back of the field and ended up fifth.

The final event of the night, the Bomber C Main, ended with Chris Bleikamp slamming nose first into the wall coming off turn four on the final lap. Bleikamp was OK, but his car was destroyed. Nick Fenned started on the pole and led the first part of a caution-filled race. About midway through the race, Fenner pulled off and retired to the pits. Perrysburg, Ohio’s Evan Myers then inherited the lead and survived to claim the checkered flag. Ron Bloomfield finished second and Jeff Warnick ended up third after starting near the back of the field. Ryder Price was fourth and Jody Burton wound up fifth. 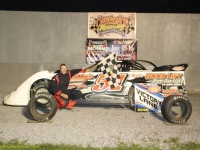 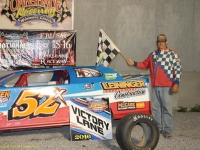 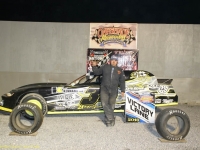 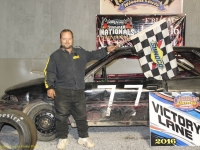 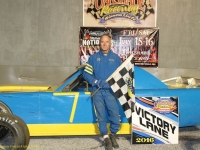 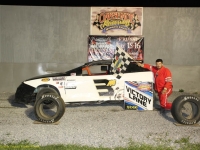 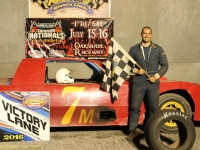