WAUSEON, OH – Steve Kester tightened up the Oakshade Raceway UMP DIRTcar Late Model point standings after picking up his first feature win of the season, besting a field of 30+ competitors. Kester is now within six points of point leader Jake Rendel. Before the season began, Kester stated he wouldn’t be racing for the track championship this season, but it would be safe to say he may have reconsidered his position since then.

The start of the UMP DIRTcar Late Model feature got really ugly really quick. A huge pile up coming off turn two on the first lap involved just about half the field and Matt Lindsey ended up on his lid in the middle of the carnage. Thankfully, all the drivers were OK. The defending Bomber track champion, Terry Rushlow, started on the pole in his very first late model feature and maintained the early lead. Rushlow had opened up a decent advantage, but a hard-charging Steve Kester closed in and appeared to take the lead away on lap eight. Unfortunately for the Holland, Ohio, driver, the caution flag came out at the same time for Dusty Moore who came to a stop on the track after running up in the top five. Kester darted out to the lead after the double-file restart. A few laps later, Ryan Missler pulled off the track after also running in the top five. Kester had opened up a big lead until a late cation flag flew on lap 21 for Rushlow who had spun to avoid getting into a slower car that had heavy damage from the first lap melee. Rushlow was forced to the tail after running most of the race in the runner-up position. That allowed Casey Noonan to restart second and have one final shot at Kester for the win. Noonan was unable to close the deal and Kester notched the feature win and tightened up the point standings. Noonan settled for second with point-leader Jake Rendel finishing third. Devin Shiels and David Mielke were both caught up in the first lap incident and ended up rounding out the rest of the top five finishers. Special thanks to Ersham Excavating out of Delta, Ohio who added to the purse making it pay $200 to start.

Carter Murday led the start of the UMP DIRTcar Sportsman feature until he slipped up high in turn four. Adrian, Michigan’s Bruce Stuart took advantage and drove by on the inside to take the lead. Brandon Gregory worked his way up to second after passing point-leader Rusty Smith on lap 12 of the 20-lap race. Gregory was trying to earn an incredible sixth feature win in a row, but the racing gods were not with him on this night. Gregory closed up on Stuart for the lead and ended up spinning just two laps from the finish. Stuart went on to hold off Smith to win his first feature of the season. Josh Robertson claimed the third finishing position ahead of Billy Brown and B.J. Gregory. Brandon Gregory ended up with a disappointing 11th place finish.

Multiple caution flags marred the Hot Rod Welding and Engineering Bomber A Main. Adam Noonan picked up the early lead but would spin a few laps later and retire to the pits. Last week’s A Main winner Kolin Schilt took over the lead, but would spin in turn two on lap 11 while battling with Toledo, Ohio’s Rich Riffe for that top spot. Riffe would go on to win his fifth A Main of the year with Jeff Foks Jr. taking second. Those two drivers are in the top two positions in the point standings as well. Craig Dippman drove his car to an impressive third place finish when you consider his left front was flat for the majority of the race. Amy Clair finished fourth and Curt Dickie ended up fifth.

Donovan Paskan out of Clayton, Michigan, started on the pole of the Hot Rod Welding & Engineering Bomber B Main and led from flag to flag to earn his second feature win of the season. John Martis moved up from his sixth starting position to finish second with Shane Estes holding off Dave “Gumby” Golembiewski to finish third. Josh Corkwell ended up fifth.

This past week, Oakshade Raceway officials announced the cancellation of the annual Birthday Race/Summer Nationals finale originally scheduled for this upcoming weekend due to the current capacity restrictions in place due to the COVID-19 pandemic. Instead, Oakshade Raceway will host a regular racing program consisting of UMP DIRTcar Late Models, UMP DIRTcar Sportsman, Hot Rod Welding & Engineering Bombers and Compacts this Saturday, August 22. Gates open at 4pm with hot laps at 6pm and racing at 7pm. 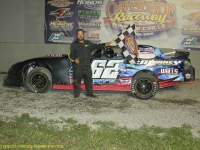 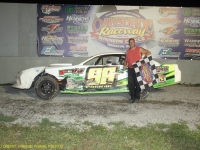 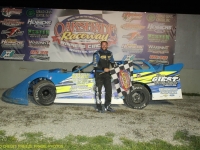 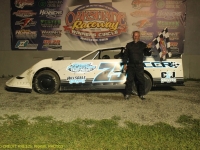