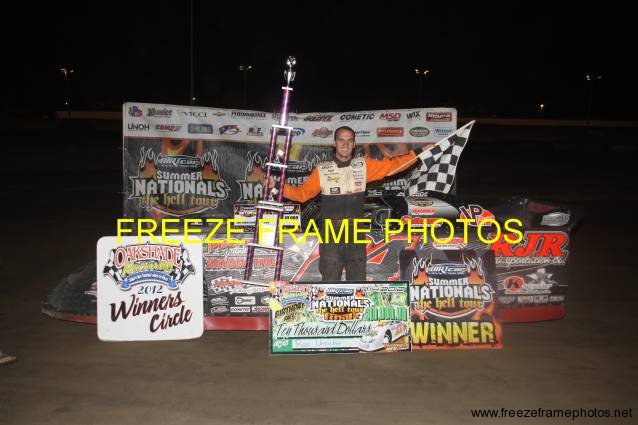 The annual Birthday Race weekend at Oakshade Raceway attracted racers from at least nine different states and Canada. Fans from all over packed the stands to watch an exciting UMP Summer Nationals finale with Ryan Unzicker and Brian Ruhlman picking up feature race wins and Brian Shirley and Kenny Wallace both earned Summer Nationals titles.

Fifty-six UMP Late Model teams battled to make the 22-car starting line-up for the 60-lap Birthday Race/Summer National finale feature. After a slight delay due to a quick rain shower, the green flag dropped on a caution-free main event. Summer Nationals points leader Brian Shirley started on the pole and maintained the early lead. A hard-charging Brandon Sheppard from New Berlin, Illinois, quickly closed in and took the lead on lap 12. Sheppard had set a torrid pace earlier in his heat race win, running laps almost a half second faster than fast qualifier Jason Feger’s time. Sheppard appeared to be on his way to a $10,000 win after pulling away from the rest of the field running the high line through the turns.

Without the help of any caution flags to tighten the field, Ryan Unzicker slowly began to reel in Sheppard as they worked through lapped traffic. It wasn’t until the last 10 laps that Sheppard’s lead quickly evaporated. Unzicker, who likes to run the low line around the corners, got alongside Sheppard and took the lead on lap 56. The two drivers battled side by side a couple laps through some heavy lapped traffic. Unfortunately, Sheppard caught the wall just a bit coming off turn two which allowed Unzicker to pull ahead and take the checkered flag to become the 2012 Oakshade Raceway Birthday Race winner. Sheppard was disappointed to finish second after leading the vast majority of the race. Matt Miller started tenth and climbed to a third place finish followed by Jeep Van Wormer in fourth. Brian Shirley’s fifth place finish was enough to capture the 2012 UMP Summer Nationals Championship as “The Hell Tour” came to a close after nearly a month of continuous racing.

Kenny Wallace decided to run for the Summer Racing Equipment Modified Nationals championship at 7am Saturday morning and had Tony Stewart fly him out to compete with 40 other Modified drivers. Sitting second in points behind an absent Mike Harrison, he just needed a 16th place or better finish to earn that championship. Things looked good early in the 25-lap feature for Wallace who started on the outside of the front row and got the early advantage over Zack Olger. Jake Ruefer charged toward the front and took the lead from Wallace on lap 16. Clarklake, Michigan’s Brian Ruhlman had his car hooked up on the high side and got by Wallace for second. Soon after taking second he then began to challenge Ruefer for the lead. A spin by Collin Thirlby on lap 19 brought out the caution flag forcing Ruhlman to restart behind Ruefer. After the restart, Ruhlman went back to work on the high side and took the lead three laps later. Ruhlman went on to pick up the $1,000 pay day for the win. Ruefer finished second followed by Jacob Poel, Zach Schroder and Zack Olger. Wallace slipped back to finish sixth his first time at Oakshade Raceway, but earned the Summit Racing Equipment Modified Nationals Championship.

Brandon Myers from Morenci, Michigan, started on the pole of the Hornet feature event and led the entire distance. William Cundick and Drew Smith made him earn the victory as both drivers raced him hard. Myers fended off the challenges and picked up his second feature win of the year. Smith edged out Cundick for second. Maverick Wright finished fourth with Devon Bell ending up fifth.

After taking the week off, the UMP Sportsman, UMP Bomber and UMP Sports Compact divisions will be back in action along with UMP Late Models and Hornets for a full show in addition to the Hot Rod Welding “Make-up Bomber Race” at Oakshade Raceway. Gates open at 4pm with racing at 7pm. 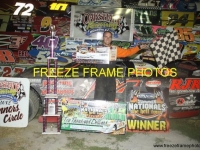 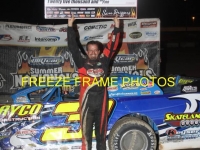 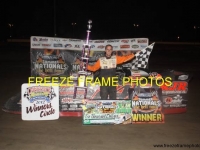 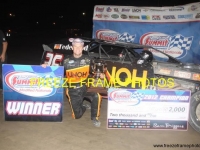