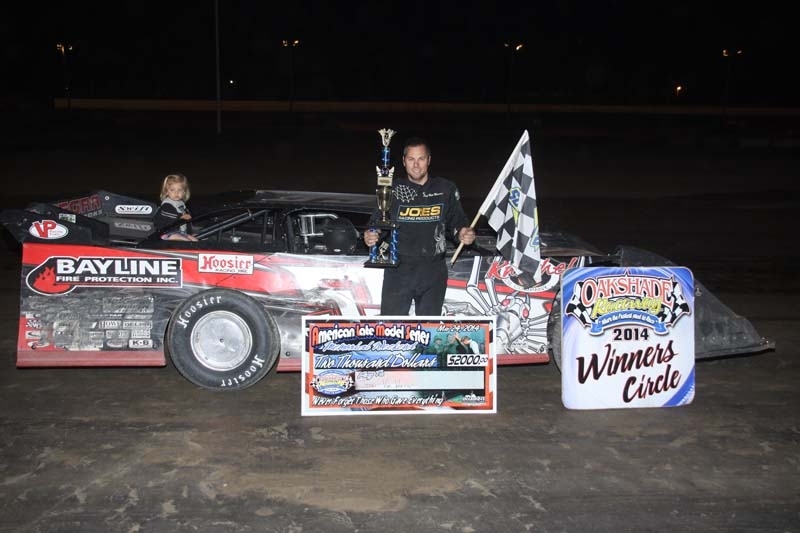 The start of the 30-lap ALMS feature was a bit rough with two caution periods before a single lap was complete. One of which was for a major pile-up involving ALMS co-point leader Rusty Schlenk as well as Devin Shiels, Jeff Babcock and defending track champion Dona Marcoullier. Schlenk and Shiels went to the pits, but came back out before the resumption of racing. Despite Marcoullier’s car ending up on top of Babcock’s, both drivers drove away and were able to continue. Although Babcock would retire to the pits one lap later under another caution period.

With Casey Noonan leading, things settled down for the remainder of the race which went green all the way to the checkered flag. Van Wormer and Brian Ruhlman both got by Noonan to take the top two positions by lap six. Ruhlman challenged Van Wormer a bit for the lead, but Van Wormer was able to put some distance between them. As he caught traffic running at that back the of the pack, Van Wormer made several bold moves to lap those cars, threading the needle through the middle three-wide on a couple of occasions. With his car able working well enough to run where ever he wanted, no one was able to catch Van Wormer who took the victory and the ALMS check for $2,000. Ruhlman and Noonan maintained their positions the final 24 laps to finish second and third respectively. Matt Miller finished off an impressive run in fourth after starting 16th. Bellevue, Ohio’s Ryan Missler rounded out the top five finishers.

It was the Mike and Tim show in the UMP Sportsman feature event once again. Mike Jessen and Tim Line put on a great show trading the lead back and forth as they have just about every night so far this season at Oakshade Raceway. Jessen was on top early with Line in tow. The battle started heating up on lap three of the 20-lap race. Line looked to the outside and took the lead on lap five. Bruce Stuart was running third when he spun to bring out a caution flag, knocking him to the rear of the field. Line proceeded to lead the next few laps, but Jessen was back to work on the inside and reclaimed the lead by lap eight. The two drivers couldn’t get away from each other and raced side by side most of the race with Tim Line on the outside and Jessen working down low. A late caution set up a green-white-checkered finish with Jessen leading. Line managed to get back ahead of Jessen and earned his second feature win of the year and now has a slim five point advantage over Jessen in the standings with both drivers each having two wins. Bruce Stuart worked all the way back up through the field after his early spin to finish third behind Jessen. Jamie Grochowski and Chane Stuckey were the rest of the top five finishers.

Chris Sands started on the pole of the Bomber A Main and led at the start with Richard Riffe close behind. Defending Bomber track champion Terry Rushlow got by Riffe and Sands to take command on lap eight. A couple laps later, Sands retired to the pits. Jeff Foks moved up to second and tried to pressure Rushlow for the lead. A huge wreck brought out the red flag just as the field was taking the white. Roscoe Stetten, Terry Rump and Adam Noonan slammed hard into each other just past the flag stand on the front stretch. Stetten climbed out of his car under his own power, but was assisted to the ambulance to be checked out further. That incident set up a one-lap shootout to the finish in which Rushlow was able to fend off Foks for his first feature win of the season. Riffe finished third ahead of Gregg Detray and Craig Dippman.

The Sport Compact feature event had a lot of tight racing action at the front of the field among a handful of drivers. Terry Rushlow Sr. got turned around in turn four early in the race. Cody Stetten was the leader early with Cory Gumm, Brandon Myers, Jerry Hoot and John Martis all close behind. Myers somehow worked his way to the front and took the lead on lap six and was able to keep Gumm behind him at the checkered flag. Stetten slipped back to finish third followed by Martis and Hoot.

A big crash involving Steve Reeves, Rick Dixon, Satch Crispen and Scott Robertson in turn four resulted in a complete restart of the Bomber B Main. Derek Morris was able to take the lead after starting on the pole and held it all the way to the checkered flag with Tim Hancock able to finish in second where he ran the entire race. A couple drivers that started very deep in the field, Ray Albert and Steve Morris, worked their way up to third and fourth place finishes with Pete Herman ending up fifth.

The racing action is just getting heated up this season at Oakshade Raceway and it continues this Saturday, May 31 with a full show of UMP Late Models, Sportsmen, Bombers and Sport Compacts. Gates open at 4pm with racing at 7pm! 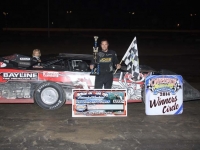 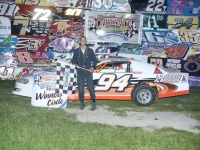 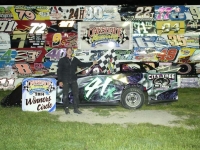 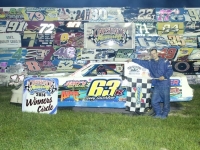 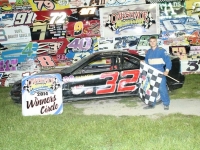