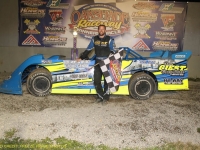 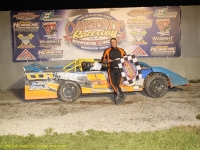 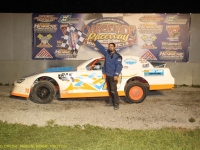 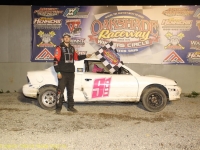 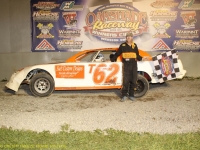 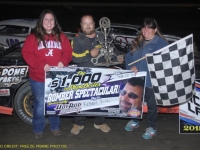 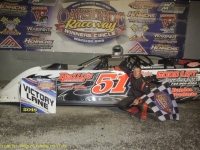 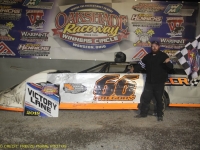 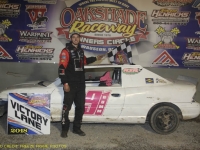 Several championships weren’t decided until the final checkered flag of the night in each class on Saturday’s Oakshade Raceway’s Season Championship Night. The only championship that wasn’t close was in the UMP Late Model class that saw Devin Shiels cap off his second consecutive track championship unofficially with a feature win.

It only took Devin Shiels two laps to gain the lead in the Season Championship Night UMP Late Model feature. Shortly after Shiels got by Chris Sands on lap two, the Britton, Michigan, driver had to deal with slower traffic running at the tail end of the lead lap. Casey Noonan began to close in on Shiels who was being held up behind a couple of slower cars racing side by side. Finally, Shiels made a bold move through the middle of those cars to get away from Noonan who fell to third as Ryan Missler went three-wide to take second. Missler tried to close on Shiels as the two worked through lapped traffic, but Missler could only get to within a few car lengths on the final lap and had to settle for a second place finish. Noonan ended up third with Steve Kester, who led the points the first half of the season, finishing fourth in the race. Chris Keller, in Devin Shiels’ backup car, finished fifth.

Rusty Smith out of Sylvania, Ohio, ended Chapman’s feature win streak, that dated back to the beginning of August, with his second feature win of the season. Karl Spoores posted a season best second place finish in the feature followed by Brandon Gregory and Joel Morton.

Jeff Foks Jr. had some bad luck last weekend that forced him out of the Hot Rod Welding & Engineering Bomber A Main early and took a big chunk out of his point lead over last week’s feature winner Rich Riffe. Foks bounced back this week with a second place finish to lock up his fifth Hot Rod Welding & Engineering Bomber track championship unofficially.

Chris Henry was leading much of the Hot Welding & Engineering Bomber A Main before getting caught up in an incident late in the race forcing him to restart at the rear. That turned the lead over to Sylvania, Ohio’s Adam Noonan who went on to pick up his second feature win of the year. Finishing third behind Foks was Craig Dippman who started mid-pack. Justin Gamber came home fourth with Terry Rushlow rounding out the top five finishers.

Goodman opened up a big lead at the start of the Compact feature. A caution for a crash involving Todd Drewes and Brogan Rehklau late in the race set up a two-lap shootout to the checkered flag with Elliot restarting in second behind Goodman. Those positions wouldn’t change in the final couple laps. Jason Deshler, Devin Goodman and Jeff Metdepenningen were the rest of the top five finishers.

Joe Nickloy led the first half of the night’s final race, the Hot Rod Welding & Engineering Bomber B Main. Drew Smith from Sylvania, Ohio, took the lead away on lap six and went on to pick up his first Bomber win of the season. Nickloy held on to finish second over Cody Stetten, Dave McMannamy and Matt Koerner.

There is a lot going on this coming weekend at Oakshade Raceway. The Hot Rod Welding & Engineering Bombers will take center stage with the $1,000 to win Papa Boiler Hot Rod Welding & Engineering Bomber Spectacular. It will also be Trick Or Treat Night, so bring lots of candy to hand out and dress up the kids in costumes. UMP Late Models, Amerigas UMP Sportsman and Compacts will also be back in action. Gates will open at 4pm with hot laps at 6pm and the racing begins at 7pm sharp. 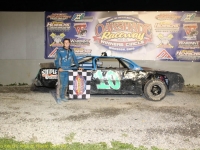 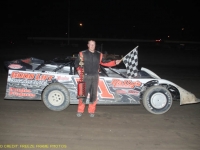 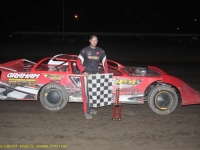 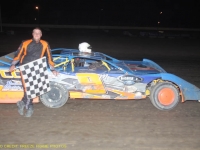 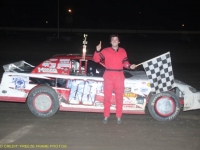 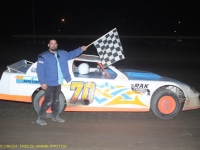 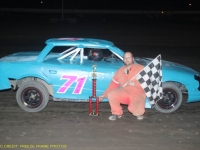 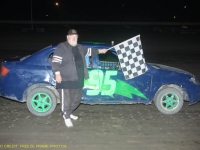