The final American Late Model Series (ALMS) event of the season at Oakshade Raceway produced some incredible racing action in which Rusty Schlenk had to overcome adversity to earn the $2,000 pay day.

Just making the 30-lap ALMS feature proved to be quite a feat. Ryan Missler and Rusty Schlenk had an epic battle for the lead in their heat race, racing side by side and swapping the lead a couple times with slide jobs and crossovers. Unfortunately for Schlenk, he was spun out after sliding up right in front of Missler in turn one on the final lap of the heat race which gave Missler the heat race win and forced Rusty to the last chance race which he would win.

Missler then started on the pole of the ALMS feature with Schlenk starting 16th. Missler, still looking for his first Oakshade feature win of the year after being close a couple times, darted out to a big lead early and appeared to be poised to make it to victory lane. Oakshade points contender Steve Kester got caught up in a accident with a lapped car while running in third, bringing out the yellow flag on lap 16 and forcing him to the pits. Kester would return to the race one lap down. McClure, Ohio’s Rusty Schlenk had worked his way up to fourth by this time and would restart in the second row of the double-file restart behind Missler and Chad Finley. One lap after the restart, Schlenk moved up to second and then another caution period would put Missler and Schlenk side by side for the restart in front of the field. The two drivers then continued their epic battle for the lead, just as they had in the heat race. Schlenk was able to finally gain the lead on lap 22 after multiple laps of door to door racing. Schlenk went on to pick up his fifth feature win of the year at Oakshade Raceway. Point leader Devin Shiels looks to have all but sewn up a second consecutive late model point championship at Oakshade with a second place finish with only one more night of UMP Late Model points racing left on the schedule. Ryan Missler slipped back to finish third, but with Kester’s misfortune earlier in the race, the Bellevue, Ohio driver moved up to second in the points. Chad Finley finished fourth and ALMS point leader Casey Noonan took fifth.

Mathew Chapman racked up his fourth consecutive AmeriGas UMP Sportsman feature win, which earned him the point lead for the first time this season with only two weeks until season championship night. Tim Fisher suffered a blown engine a couple weeks back and announced he was done for the season even though he was sitting fourth in points. Another racer stepped up and helped get a new power plant into the 4 car and that powered Fisher to a second place finish in the feature. Mike Jessen entered the night with the points lead, but after finishing third, he now trails Chapman by three points. Jerry Signor and Josh Robertson were the rest of the top five finishers.

Up until Saturday night, only two drivers had won the Hot Rod Welding & Engineering Bomber A Mains all season long. One of those drivers, Jeff Foks Jr., started on the pole appeared to be on his way to win number six after leading much of the first part of the race. Multiple cautions kept the field tight and after one of the restarts, Foks’ car fell off the pace and dropped through the field. That turned the lead over to Sylvania, Ohio’s Adam Noonan who went on to become only the third different Bomber A Main winner this season. Cody Houston capped off a nice run with a second place finish with Chris Henry, who has six A Main wins, finishing in third. Ryder Price, winner of last week’s B Main, started outside the top 10 and managed a fourth place finish. Rich Riffe finished fifth.

The Hot Rod Welding & Engineering Bomber point battle tightened up after Jeff Foks’ mechanical issues knocked him back to a 15th place finish. Foks remains atop the points with Rich Riffe and Adam Noonan within 60 points.

The Compact class has a new point leader after Saturday night’s action. Nathan Goodman out of Wauseon, Ohio, posted his third feature win out of the last five events which catapulted him to the top of the point standings in an incredibly tight point battle with Eric Carr and Joe Elliot. Those three drivers are separated by less than 10 points. Last week’s feature winner, Ken Watts came up one spot short this week and ended up finishing second with Joe Elliot and Eric Carr third and fourth respectively. Jason Deshler started on the pole and ended up fifth.

Rain put a halt to the night’s final event, the Hot Rod Welding & Engineering Bomber B Main. Zach Stotz took the early lead, but only one lap could be officially completed before a light rain started to fall and made the track too slick to race on. Officials tried to wait out the brief shower and it appeared as though the field was just a couple of laps away from going back to green when bigger drops began falling once again. Driver’s were then sent to the pits after it was decided the race would be made up next week.

So now in addition to the special $800 to win UMP Modifieds, AmeriGas UMP Sportsman, Hot Rod Welding & Engineering Bombers and Compacts show, there will be an extra Bomber B Main run this coming Saturday, September 8. Gates open at 4pm with hot laps starting at 6pm. Racing will begin at 7pm sharp! 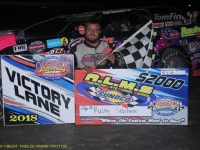 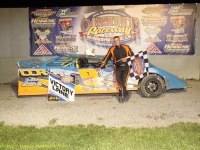 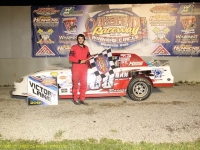 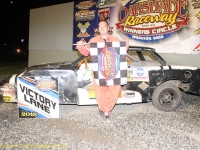