The Bill Reckner Memorial kicked off the 39th season of racing at Oakshade Raceway on Saturday night with Tim Line, Gregg Detray and Terry Rushlow Sr. winning the main events and Jeremy Grover survived 200 laps to pick up the checkered flag in Sunday afternoon’s Enduro race.

It took several attempts at getting things started in the UMP Sportsman Bill Reckner Memorial feature event, but finally the racing action got going after three attempts at a start. Tim Line and Bob Krumm traded the lead a couple times on the first lap and then Line set sail and pulled away with the lead. The defending UMP Sportsman Track Champion was aided by the lack of any cautions and dominated the race lapping the majority of the field.

The Bill Reckner Memorial Bomber A Main featured a lot of exciting racing action that started on the first lap when Steve Morris and Jim Remly got together on the backstretch near the front of the field and stacked things up behind them which resulted in Jarrett Rendel in the wall. Back under green flag racing with Jeff Foks leading, Craig Dippman got crossed up on the second lap coming off turn four while running in the top five to bring out another caution flag. A few laps later, a fire erupted under the hood of Satch Crispen’s car while under a yellow flag that took him out of contention after he had broken into the top five. There was more trouble still under a caution period when leader Jeff Foks pulled to the infield and out of competition turning the lead over to Adam Noonan. Greg Detray wasted little time getting by Noonan after the restart to take over the lead on lap six. Another caution late in the race set up a one lap shoot-out to the finish as the allotted time limit had expired. This gave Noonan and Chris Sands, who was running third, one last shot at Detray, but Detray held on to pick up his first ever A Main feature win.

Bradley Griffitt from Toledo, Ohio gained the lead at the start of the Bill Reckner Sport Compact feature event and appeared to have the car to beat. Late in the race, Terry Rushlow Sr. and “Sparky Marky” Gillingham began to tighten the gap. Griffitt, while trying to hold on to the lead, got into the lapped car of Aaron Barrick who had his car up on two wheels several laps earlier. Griffitt bounced off Barrick and continued on, but Rushlow was able to make a last lap pass and picked up his first feature win at Oakshade Raceway.

Tim Murphy started on the outside of the front row of the Bill Reckner Bomber B Main and managed to stay ahead of trouble. Chris Sawinksi was running second until he spun early in the race. Roscoe Stetten was running strong in second but started smoking and appeared to have mechanical issues under the rear-end that forced him to the pits with just two laps to go. That allowed Murphy to continue on to the checkered flag unchallenged with Skeet Reckner finishing second.

Fans were treated to an extra bonus of some UMP Late Model racing thanks to Ron Miller, Brandon Rhodes, Bobby Hutchins and an anonymous race fan who ponied up some cash for the drivers who had showed up with the intention of just getting a few practice laps in. Casey Noonan started at the tail of the eight-lap dash and started to work the inside to get up to the front to take the checkered flag. Amy Bernard took second followed by Rob Anderzack and Steve Miller.

The first half of Sunday afternoon’s 200-lap Enduro featured some tight racing for the lead between Ron Bloomfield Jr. and Chris Williams. The two drivers traded the lead multiple times. Eventually Bloomfield took control and looked strong, but problems with his right-front wheel forced him to a lengthy stay in the pits just past the halfway point. Chris Williams also started to have transmission issues at about the same time that made him make some stops back in the pits as well. This turned the lead over to Jeremy Grover by lap 125. The only trouble Grover experienced while leading the final 75 laps, was when his hood started to come off. He quickly ducked into the pits to have it removed completely and was back on the track without losing much time. He went on to pick up the $1,000 victory over Chris Osborn who finished second, 14 laps behind. Mike Ritz completed 176 laps to finish third followed by Bloomfield and Williams.

The next Enduro race is scheduled for Sunday, May 18, but Saturday night racing continues this coming Saturday with the UMP Late Models, UMP Sportsmen, Bombers and Sport Compacts. Gates open at 4pm with racing at 7pm. 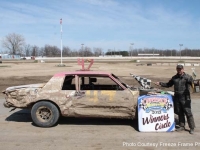 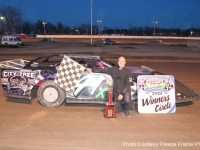 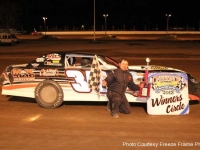 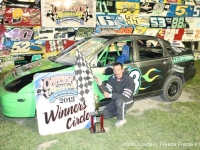 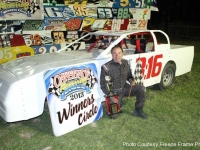