Dusty Moore took the checkered flag in the first UMP Late Model feature event of the year at Oakshade Raceway with an impressive green-flag run on Saturday night.

It took a few attempts to get things going with a couple caution flags stopping the action before a single lap could be completed at the start. After the third attempt, it was smooth sailing for pole-sitter Dusty Moore. The Swanton, Ohio, driver jumped out to the lead with Rusty Schlenk in tow. Moore built up a lead over Schlenk who was able to chip away at it a couple times while working through lapped traffic. Schlenk was unable to mount a viable challenge and had to settle for second as Moore picked up his first Oakshade feature win since the 2008 racing season. Chris Keller looked strong all night and posted a third place finish ahead of Casey Noonan who had some damage from one of the incidents at the beginning of the race. Devin Shiels finished fifth.

Bruce Stuart had a very fast car and took the lead of the UMP Sportsman feature after starting on the pole. He held the lead until Graeme Short spun in front of Dan Gehring on lap nine. Gehring tried to go high around Short who stood on the gas, but Gehring ran out of room and slammed into Short to bring out the caution flag. Mike Jessen took advantage and stole the lead from Stuart on the restart. A few laps later, Stuart would spin while running in second which forced him to the rear for a restart. Jamie Grochowski worked up into the top five and spun on lap 15 of the 20 lap race, ending his great run. That set up last week’s feature winner, Tim Line, for a shot at Jessen’s lead. Line tried to get a run on the high side on the final couple laps, but Jessen was able to hold him off and take the checkered flag. Stuart recovered nicely to finish third followed by Bob Krumm and Drew Smith.

Jeff Foks started on the pole of the Bomber A Main and led the entire distance for his first feature win of the year. Multiple cautions kept the field fairly tight with Terry Rushlow running second most of the race trying to figure out how to challenge Foks. Rushlow mounted one final cbid for the lead on the last lap when he dove to the inside in turn three. It wasn’t enough as Foks held on for the win. Skeet Reckner took third with last week’s A Main winner, Gregg Detray, ending up fourth. Richard Riffe was fifth.

Nick Jenema got a bump in the rear from Cory Gumm which shot him out to the lead on the first lap of the Sport Compact feature. That was as close to a challenge Jenema would get for the lead as he pulled away from the rest of the field and took the easy win. “Junior” Jerry Hoot got by Gumm to finish second with Brandon Myers and Brogan Rehklau rounding out the rest of the top five finishers.

A huge lead for Mathew Chapman was wiped out on the final lap of the final race of the night, the Bomber B Main. Chapman dominated the entire race, but a late caution for Dave McMannamy’s spin tightened up the field for a one-lap shootout to the finish. Terry Rump was unable to capitalize on the opportunity and settled for second with Chapman picking up the victory. Colin Walker finished third followed by Joe Hefner and Bill Reeves Jr.

Great racing action continues to heat up this season at Oakshade Raceway on Saturday, May 10 with a full program of UMP Late Models, Sportsmen, Bombers and Sport Compacts. Gates open at 4pm with racing at 7pm. 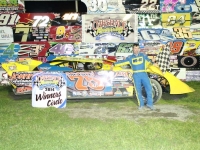 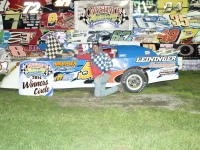 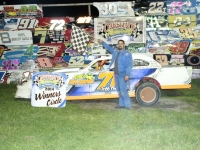 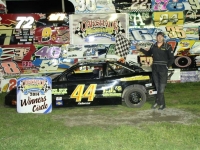 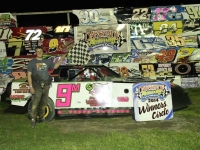