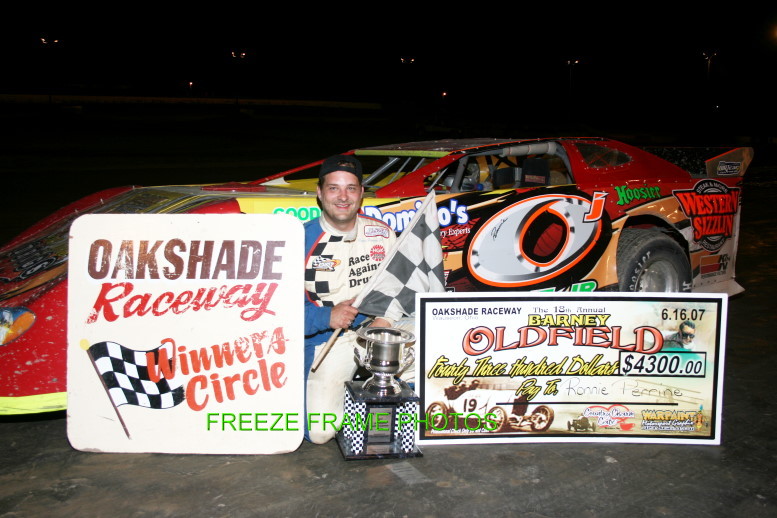 A packed house for the 18th Annual Barney Oldfield Race was treated to 40 laps of nonstop racing action without any caution periods and at the end, a new name was added to the prestigious list of winners of Oakshade Raceway’s Barney Oldfield Race as Ronnie Perrine Jr. picked up his first ever UMP Late Model Feature victory.

Duane Chamberlain, last year’s winner, drew a pole starting position and led early in the race. Rick Delong started on the outside of the front row and reeled Chamberlain back in and took the lead on lap five with Ronnie Perrine Jr. following into second.

Delong, Oakshade’s UMP Late Model point leader, and Perrine Jr. pulled away from Chamberlain and the rest of the field. Perrine Jr. rode right on Delong’s back bumper until lap 15 when he got to the inside and took the lead while they were working through lapped traffic.

Lima, Ohio’s Ronnie Perrine Jr. continued to hug the inside groove and drove away from the rest of the field to post his first ever Late Model victory as well as earning the Barney Oldfield Cup trophy sponsored by Country Charm Cafe and a check for $4300.

Dan Wallace had a strong second place finish with Dusty Moore moving up to finish third. Delong slipped back to finish fourth with Duane Chamberlain rounding out the top five finishers.

Mike Jessen had another good run going in the UMP Sportsman Feature, leading the first half of the race after starting on the pole.

Josh Steinacker closed in and passed Jessen for the lead, but the caution flag would fly for debris at the same time which would give the lead back to Jessen.

Jessen then had something break in the rear end and fell off the pace just after the restart and the rest of the field scrambled around the limping 52 car. Jessen got his car to the infield out of harm’s way and the race stayed green with Steinacker taking over the top position.

Steinacker went on to post his third UMP Sportsman Feature win of the year and added to his already large point lead.

One of the most exciting races of the night turned out to be the UMP Bomber A Main which featured five different leaders and more lead changes.
Dan Shaffer was the first to lead with heavy pressure from Tom Ordway, Brian Przepiora and Chris Henry just behind.

Przepiora was next to lead when he got by Shaffer on a restart on lap three after a caution for Jeff Geis’ spin.

Chris Henry took his turn out front taking the lead on lap five, but his lead would be brief. Tom Ordway looked to the outside and Przepiora tucked back to the inside of Henry, making it three deep for the lead. Przepiora and Henry made contact sending the 68 car of Henry spinning which brought out the caution and ended Henry’s hopes of capturing his second A Main win of the year.

Przepiora was back in the lead for the restart, but Ordway got by on lap seven.

Dan Dippman quietly worked his way up to the front and took the lead away from Ordway on lap eight and those two drivers would battle all the way to the checkered flag with Ordway getting it by a nose over Dippman at the finish.

Randy Roseman, Jim Scout and Tim Murphy got by Przepiora for the third through fifth finishing positions.

After an exciting and hugely entertaining A Main, the Bomber B and C Main were marred by multiple caution periods.

Tim Shelley led from flag to flag in the UMP Bomber B Main and stayed in front of all the incidents that brought out yellows that happened behind him. One of which cause a big pile up on lap three after Curt Lancaster and Danny Hogrefe got together while battling for second.

Shelley went on to take the checkered flag and Garry Domoe got by Lancaster to finish second. Brad Brehm was fourth and Karl Spores Jr. finished fifth after starting way back in the 11th row.

David Goben was in command of the UMP Bomber C Main early on until he slipped up high in turn four and then Tevor Reed, Chris Tressler and Jerry Signor battled three-wide for the lead until Reed spun in turn two to bring out a caution.

With Tressler leading, Jerry Signor gave up the second position when his car began to slow and eventually came to a stop on the track bringing out another yellow.

Tressler, Billy Brown and David Goben made it three-wide again for the lead with just two laps remaining. Goben slipped back from that battle leaving Tressler and Brown to duke it out to the finish.

The racing excitement continues Saturday, June 23rd at Oakshade Raceway with the Butch Wildermuth Memorial/American Late Model Series event paying $3000 to win. UMP Sportsmen and UMP Bombers will also be back in action and the Donnie Moran Race Simulator will be set up so that race fans can experience what it is like to drive a Late Model. Gates will open at a special time for this event at 3pm with races starting at 7pm. Check out www.oakshaderaceway.info for more information. 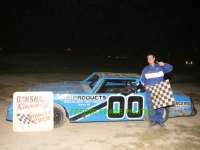 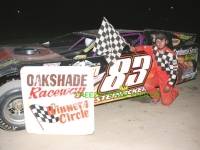 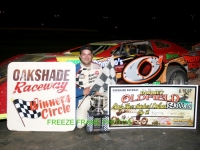 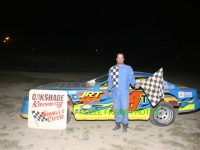