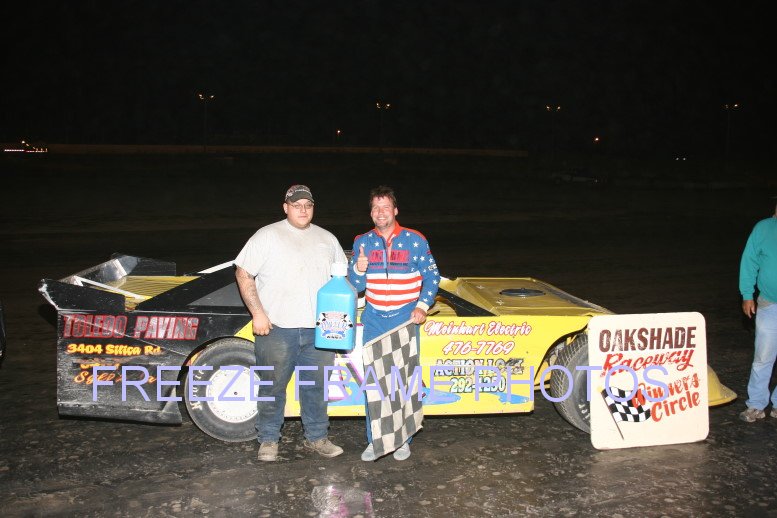 Oakshade Raceway honored long-time fuel man Howard Miller on Saturday night, along with all the fallen members of Oakshade Raceway’s extended family that consists of drivers, crews, fans and staff. Todd Schroyer highlighted the evening with an exciting Howard Miller Memorial UMP Late Model Feature win after stepping into a race car for the first time in a couple years.

Todd Schroyer started on the outside of the front row in the car his brother Rody had won in the previous week and immediately took command of the 25-lap feature event.

Justin Paxton took a hit in the points after coming in to the night fifth in Oakshade’s UMP Late Model point standings. Paxton spun on the first lap of the feature forcing a complete restart and retired to the pits later in the race .

Once again under green with Schroyer leading, Rusty Schlenk spun in turn one while running third just three laps into the race bringing out the yellow and forcing him to the tail for the restart. While still under the same caution period, Ronnie Perrine Jr. was running fourth but gave up that position when he went to the pits with a flat tire.

Unofficial Oakshade points leader Rick Delong mounted a challenge for the lead getting to the inside of Schroyer for a few laps on restarts after a couple cautions. Schroyer held off the challenges and continued to lead.

Chris Keller brought out the red flag on lap 20 after sliding up and over the turn one banking for a second time. Keller ended up rolling his car this time ending up on his roof. Keller was OK.

Schlenk worked back through the field all the way to second on lap 21 after his spin earlier in the race and began to pressure Schroyer for the lead. Schroyer kept his car running the high groove while Schlenk ran to his inside the final two laps of the race. Schlenk came up just short as Schroyer held on to pick the Howard Miller Memorial Feature victory. After the race, Todd Schroyer announced he is retiring from racing. His brother Rody will be back piloting the 70 car next week.

Delong was the third place finisher ahead of Aaron Scott and Dusty Moore.

The Howard Miller Memorial UMP Sportsman Feature produced some more exciting racing action with Josh Steinacker and Tim Fisher battling all the way to the the wire.

Bruce Stuart was running second to Steinacker early on and spun in turn two to bring out the yellow flag on lap three.

A few laps later Tim Fisher moved into second and then began to attack Steinacker for the lead. Fisher actually had the lead for a moment, but a caution for debris came out at the same time which saved Steinacker as the field was lined up by the way they were running the last completed green-flag lap.

Steinacker continued to try to find a way to hold off Fisher in the final stages of the race by changing his line in the corners a couple times, but Fisher got alongside on the final lap and came up just short as Steinacker held on to win his fifth feature of the year.

Rusty Smith posted a third place finish with Mike Jessen and Chris Smith rounding out the rest of the top five.

Craig Dippman celebrated his 33rd birthday with a Bomber heat race win and then went on to win the Howard Miller Memorial UMP Bomber A Main in the closest finish of the night.

Dippman took advantage of starting on the pole by opening up a big lead at the start.

The first caution came out on lap 12 for Kyle Light’s car that had rolled to a stop on the backstretch. That allowed Dan Dippman to close right up on Craig Dippman with Tom Ordway lurking in third.

Ordway got by Dan Dippman and then tried to take the lead from Craig Dippman on the final lap getting to his inside in the final set of corners. They came off turn four side by side with Craig Dippman edging out Ordway by the nose of his car at the checkered flag. It was Craig Dippman’s first feature win of the year.

Dan Dippman fell back to finish third followed by Chris Henry and Chris Joy who added an extra $50 to all Bomber Feature winners in memory of his father and Howard Miller.

Tony Tolles led the first part of the Bomber B Main until Randy Roseman got by on the inside on a restart after one of the many cautions.

Tolles retired to the pits while under caution on lap six relinquishing the second position to Jeff Geis.

Geis made a bid for the lead to the inside of Roseman near the end of the race, but then Geis fell back as Roseman pulled away en route to his first feature win of the year.

Justin Woodruff led the first eight laps of the Howard Miller Memorial UMP Bomber C Main until Jeff Krotzer got by on a restart.

Chris Tressler brought out another yellow just after the restart and reverted the lead back to Woodruff.

Once again his lead would be short lived as Krotzer went on to pick up his first feature win. Woodruff held on to finish second with Tim Fisher driving Duane Slater’s Bomber to a third place finish. Trevor Reed and Lee Buck were the rest of the top five finishers. 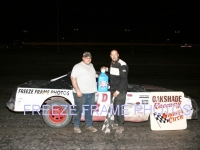 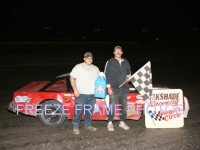 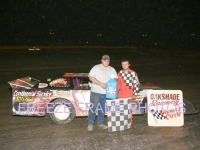 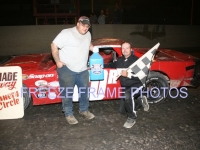 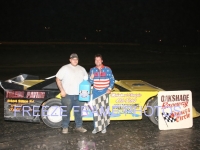