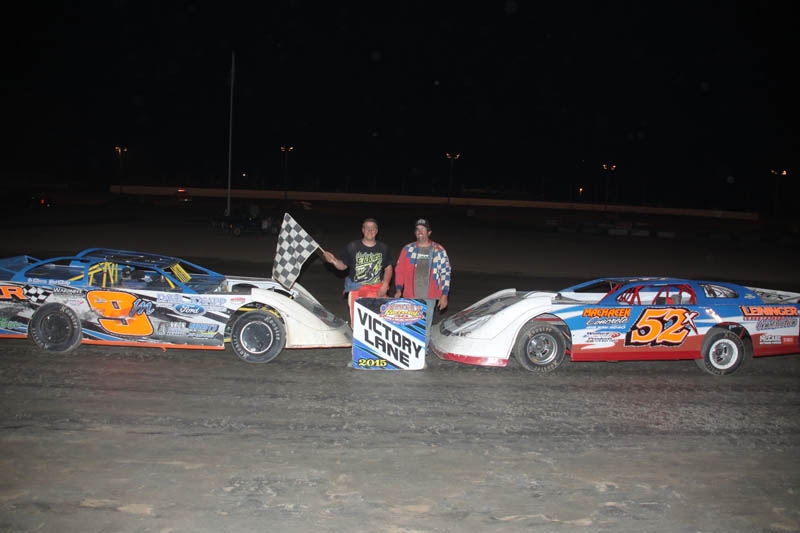 With the feature races rained out the week prior, Oakshade Raceway hosted 10 feature races on Saturday night which were highlighted by Mathew Chapman and Mike Jessen Sportsman Twin 25s wins.

The Twin 25s are two full 25-lap features for the UMP Sportsman class with the top finishers of the first race inverted for the start of the second race based on the winner’s pill draw. Twin 25 race number one started off with Lambertville, Michigan’s Joe Derbeck taking the lead at the drop of the green flag after starting on the pole. Unfortunately, his lead was short-lived because Derbeck spun on lap two which brought out the caution flag and sent him to the tail. That turned the lead over to Bob Gregory with Tim Fisher second. Fisher slowed on lap three and pulled out of competition giving up the position. Oakshade UMP Sportsman point leader Bruce Stuart moved up to second by lap six and began to close in on Gregory for the lead. Stuart managed to catch Gregory and on lap 18 the two drivers tangled after contact while working through some heavy lapped traffic. Gregory was assisted back to the pits and Stuart was able to continue and restarted at the back of the field. UMP Sportsman rookie Mathew Chapman from Tecumseh, Michigan then took over the race lead and pulled away on the way to his second feature win of the season. Jamie Grochowski finished second followed by Rusty Smith, Mike Jessen and Joe Smith.

Chapman drew for an eight car inversion for the the start of the second Twin 25 feature which meant he would be starting on the outside of row four. After a couple other races were completed, the UMP Sportsman returned to the track for the second of the Twin 25s with Billy Brown starting on the pole. Berkey, Ohio’s Mike Jessen quickly climbed to the top of the running order and led the majority of the race all the way to the checkered flag despite late caution that set up a one-lap race to the finish. Jessen was able to fend off Joe Smith who finished second and Tim Fisher who had a great run to finish third after starting at the back of the field due to his problems in race number one. Bruce Stuart maintained a slim points lead with his fourth place finish and Joe Derbeck rounded out the top five finishers.

Earlier in the evening, several make up feature races were run from last week’s wash out. The UMP Late Model feature picked up where it left off on July 18 with nine laps completed and Rusty Schlenk from McClure, Ohio leading. Upon the resumption, Devin Shiels reclaimed the lead from Schlenk and appeared as though he may pick up the feature win, but Schlenk fought back. He was able to close back in on Shiels while working through lapped traffic and took the lead back with just two laps to go and won the race. It was the defending track champ’s first UMP Late Model feature win of the season at Oakshade. Shiels settled for second followed by Chris Keller, Brad Eitniear and Steve Kester.

The Bomber A Main from the July 18th rain out started off the evening’s racing action with defending Bomber track champion Jeff Foks leading the early laps. Foks, still looking for his first A Main win of the year, continued to lead with Swanton, Ohio’s Gregg DeTray closing in. DeTray took second by lap eight and took the lead from Foks on a restart after a caution. DeTray went on to pick up his third A Main win of the year with Foks taking second. Adam Noonan finished third with point leader Chris Sands fourth. Tim Murphy was fifth.

Make up feature racing continued with the Compact feature event. Cody Stetten made a move four-wide to take the lead at the start of the race, but Toledo, Ohio’s Richard Riffe took command on lap two and held the lead all the way to the checkered flag. Stetten finished second and Brogan Rehklau was third. Aaron Barrick had to start at the tail since he was in a different car this week, but still managed a fourth place finish with pole sitter John Martis ending up fifth.

More UMP Late Model feature action took to the track again after the first Twin 25 race with Devin Shiels taking the early lead after starting from the pole. Outside pole-sitter Steve Kester took the lead on lap three and continued a good battle with Shiels at the front of the pack. Shiels returned to the lead on lap 13 with a pass to the inside of Kester. Shiels survived a close brush with Steve Miller who ended up spinning while running at the tail end of the lead lap just in front of the leaders on lap 15. Three laps later, Shiels relinquished the lead once again, this time to Clarklake, Michigan’s Brian Ruhlman who went on to pick up his fourth Oakshade feature win of the year. Shiels second place finish moved him up to second in the points, 66 points behind Ruhlman after Casey Noonan, who came into the night second in points, failed to make the start of this second UMP Late Model feature. Rusty Schlenk moved up from his 11th starting position to finish third. He also moved up to third in the points. Kevin Reeve finished fourth in the race and Kester slipped back to wind up fifth.

Gregg DeTray continued his dominance in the second Bomber A Main of the night. He led the entire distance after starting on the outside of the front row. Despite multiple caution periods, DeTray was able to secure his fourth A Main win of the year and his third consecutive. He now sits just 7 points behind point leader Chris Sands in the point standings. Sands mustered a second place finish in the race with Adam Noonan taking third for the second time on the night. Jeff Foks was fourth and Tim Murphy was fifth once again.

Brogan Rehklau was able to add a bit of a cushion to his Oakshade Raceway Sport Compact point lead with his third feature win of the year. The Waldron, Michigan driver jumped out to the early lead and held it all the way to the checkered flag. Richard Riffe came up one position short on making it a sweep for the night and had to settle for second. John Martis took third with Cole Walbolt and Cody Stetten rounded out the rest of the top five finishers.

Teri-Lynn Murphy led early in the Bomber B Main with Donovan Paskan trailing. Grand Ledge, Michigan’s Rick Dixon marched his was through the field after starting 11th to take the lead and the eventual victory. Paskan maintained a second place finish followed by Jarrett Rendel and Curt Lancaster. Murphy slipped back to finish fifth.

The tenth and final feature event of the night was the Bomber C Main in which only six of the 12 drivers in the line up actually started. Morenci, Michigan’s Brenem Mellon pulled away and won his first feature race ever. Wil Garland was second followed by Taylor Dippman, Ryder Price and Henry Walls Jr.

Racing action heats up once again on Saturday, August 1st with the return of the American Late Model Series and a $2,000 to win show. The UMP Sportsman, Bomber and Compact classes will also be back in action including some double features. The UMP Sportsman feature and Bomber B Main from July 18 will be added to this show. Gates open at 4pm with racing at 7pm. 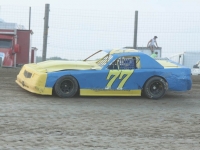 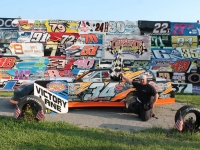 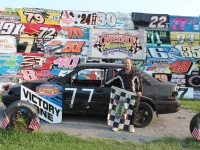 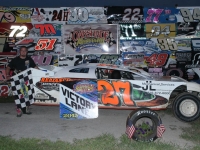 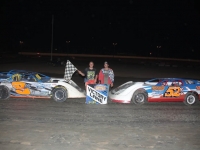 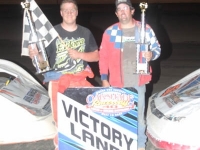 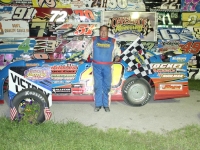 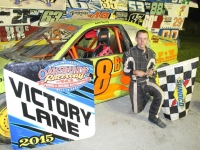 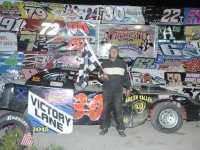