The UMP Modifieds made their third and final visit of the season to Oakshade Raceway under gloomy skies on Saturday night. The rain held off and Wauseon Ohio’s Brad Eitniear drove his way to the feature win.

The night started off with the make up Hot Rod Welding & Engineering Bomber B Main that was washed out at the end of last week’s action due to rain. Curt Dickie out of Lyons, Ohio, was the class of the field. Dickie grabbed the lead early and led all the way to the checkered flag. Zach Stotz started second and finished second with Gabe Mueller moving up from deep in the field to end up third. Justin Gamber and Scott Robertson were the rest of the top five finishers.

A little later in the night, the UMP Modifieds took to the track for their main event. Brandon Vaughan took the lead at the drop of the green flag, but Brad Eitniear quickly worked his way up into contention. After Eitniear moved up to second, the yellow flew on lap four for an incident involving Brian Przepioria and Ray Jackson. Once the green flag came back out, Eitniear took command of the race lead and Brian Ruhlman moved up to second. Despite several more cautions that kept the field tight, Eitniear went on to the easy victory over Ruhlman. Troy Catterene finished third with Vaughan slipping back to fourth. Bill Griffin finished fifth.

Mathew Chapman has really come on strong late in the season in the AmeriGas UMP Sportsman class at Oakshade. Chapman took over the point lead after last week’s feature win and was able to add to that lead slightly after earning his fifth consecutive feature win. Brandon Gregory led the first few laps, but Chapman got by on lap four and never looked back. It was the eighth feature win of the year for the Tecumseh, Michigan driver. Mike Jessen’s second place finish minimized the points he lost to Chapman as he now trails by six heading in to next weekend’s season championship. Gregory held on to finish third followed by Brian Fisher and Rusty Smith.

Cody Houston started on the pole of the Hot Rod Welding & Engineering Bomber A Main and led at the start. Toledo, Ohio’s Richard Riffe took advantage of a restart after an early caution to snatch the lead away from Houston. Bomber point leader Jeff Foks Jr. began pressuring Riffe late in the race, but a late race caution would foil his bid for a sixth feature win of the season. Foks ended up coming to a stop on the track after the caution flag flew and would have to restart at the tail of the field. Instead Foks took the 70 car to the pits as the rest the field prepared for a two-lap shootout to the finish. With Chris Henry restarting second, Riffe was able to hang on to pick up his first feature win of the season and closed to within 18 points of Foks. Henry settled for a second place finish followed by Cody Houston, Adam Noonan and Dave “Gumby” Golembiewski Sr.

The point lead in the Compact class changed hands for the second time in as many weeks. Nathan Goodman took over the point lead after winning the feature last week, but with Goodman finishing 13th and Joe Elliot picking up his second feature win of the season, the Osseo, Michigan driver now find himself atop the points. Devin Goodman finished second followed by Brogan Rehklau and Arron Barrick. Eric Carr remains a point contender as well with his fifth place finish. The top three in points are separated by less than 25 points.

Sylvania, Ohio’s Scott Hammer took command at the start of the final event of the night, the Hot Rod Welding & Engineering Bomber B Main, and led the entire distance. Hammer was able to fend off a challenge about midway through from Dylan Burt to earn his first feature win of the year. Drew Smith was able to get by Burt to finish second.

Devin Shiels has all but wrapped up a second consecutive UMP Late Model track championship at Oakshade Raceway, but there is much left to be determined in the other three regular classes’ point races. It will all be decided Saturday, September 15 as Oakshade Raceway hosts Season Championship Night for the UMP Late Models, AmeriGas UMP Sportsman, Hot Rod Welding & Engineering Bombers and the Compacts. Gates open at 4pm, hot laps begin at 6pm and racing starts at 7pm. 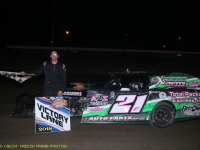 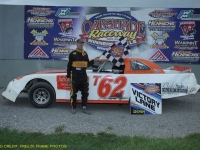 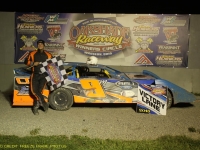 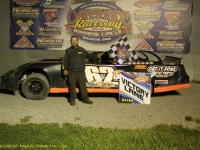 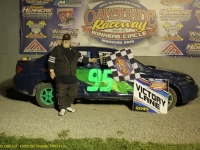 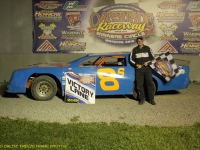