Brad Wade and Rob Anderzack started on the front row and traded the lead the first few laps until Wooster, Ohio’s Doug Drown took command on lap four. Anderzack battled back, but slipped high in turns one and two before fading back just a bit. Dusty Moore then took over second, but was unable to challenge Drown for the race lead.

A caution on lap 16 for a crash involving Jake Rendel, Graeme Short and Bob Mayor tightened the field one last time, but no one would catch Drown. Dusty Moore held off Matt Miller to finish second. Rusty Schlenk took fourth with the defending track champion, Brian Ruhlman, finishing fifth.

The UMP Sportsman Feature produced one of the most exciting finishes of the night after Rusty Smith led from the start with Bruce Stuart trailing in second. Donnie Ringman brought out the caution flag with four laps remaining after he spun just in front of the lead pack while running near the end of the lead lap cars. Rich Ruff restarted third and pounced to take second from Stuart. Stuart, from Adrian, Michigan, battled back and reclaimed second and seemed be hooked up running the high line. He continued his march to the outside of Smith to battle for the lead on the final lap. Stuart’s momentum on the high side carried him to his first feature win of the season with Smith finishing a disappointing second after having lead the first 19 laps fo the race. Ruff wound up third followed by George Lindsey and Bob Gregory.

Chris Henry started on the outside of the front row in the Bomber A Main and quickly gained the lead over pole-sitter and last week’s B Main winner, Ryan Gorey. Former Bomber track champion Jeff Foks seems to be back in championship form, running second behind Henry, trying to pick up his second consecutive A Main win. The two drivers pulled away with the lead and defending champion Gregg Detray joined the pack to make it a three car battle out front. DeTray was able to get by Foks for second, but Henry, out of Jackson, Michigan, held on to pick up the feature win. Foks settled for third with Chris Sands and Dan Dippman rounding out the rest of the top five finishers.

The Sport Compact class continues to grow at Oakshade Raceway with nearly 30 cars in competition on Saturday. Cody Stetten took the early lead in the feature event, but last week’s winner, Richard Riffe, quickly marched his way to the front and took the lead away en route to the Toledo, Ohio driver’s second consecutive feature win. Brogan Rehklau finished second with Stetten slipping back to finish third. Nathan Goodman and Cory Gumm were the rest of the top five finishers.

Scott Hammer jumped out to the lead at the start of the Bomber B Main and led the first half of the race until Toledo, Ohio’s Dylan Burt took advantage of a restart after a caution to jump to Hammer’s inside. Burt took the lead, but Hammer battled back on the inside and the two drivers swapped the lead racing side by side for several laps. A late caution tightened the field once again with Hammer back at the point for a green-white-checkered finish. Burt got back to the inside and made the pass for the lead at the white flag. Hammer tried to battle back to the inside on the final lap with Terry Rump closing in to make it a three car race to the checkered flag. Burt edged out both Hammer and Rump for his first win. Garrett McClain finished fourth with Brenem Mellon in fifth.

Get ready for even more racing excitement Memorial Day weekend at Oakshade Raceway with the American Late Model Series presented by Sunoco racing for $2,000 to win on Saturday night. UMP Sportsman, Bombers and Sport Compacts will aslo be in actino with gates opening at 4pm and racing at 7pm. 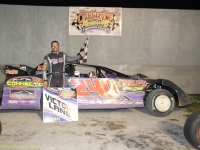 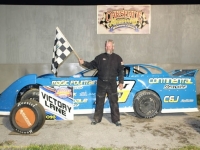 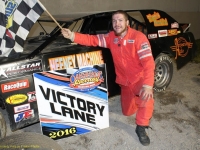 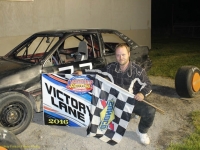 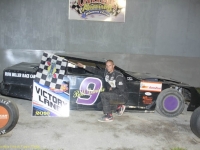