WAUSEON, OH – Mother Nature finally gave Oakshade Raceway a break with beautiful weather and allowed the facility to finally open its doors for the first time this season. A large crowd packed the grandstands and were treated to some great racing action highlighted by Britton, Michigan’s Devin Shiels late race pass for the win in the DIRTcar UMP Late Model feature event.

Shiels, the defending late model track champion, started fifth and had to work his up to get in contention. It was Sylvania, Ohio’s Casey Noonan that darted out to a big early lead after starting on the pole. A lap nine caution would wipe out Noonan’s advantage with Shiels restarting in the second position. Rusty Schlenk was working his way up through the field and retired to the pits after peaking in the third position about halfway through the 25-lap feature event. Noonan continued to lead in the second half of the race with Shiels and Steve Kester battling for second. Once Shiels finally cleared Kester, he set his sights on reeling in the race leader in the final laps. Shiels closed the gap and made the pass for the lead to earn the first feature win of the season. Noonan settled for a second-place finish with Steve Kester, Hillard Miller and Dusty Moore rounding out the rest of the top five finishers. Thanks to an anonymous sponsor who pitched in an additional $1,000 into the late model feature, each driver took home an extra $50.

Jesse Jones grabbed the lead with a pass on the outside on lap one of the 20-lap sportsman feature event. Carter Schlenk put pressure on the driver out of Liberty Center, Ohio, for the race lead early in the race. Jones took off after a restart from a lap six caution and drove away from the rest of the field to pick up the convincing win. It was his second consecutive feature victory after winning the final event of last season. Josh Robertson finished second with Joe Smith taking third. Schlenk slipped back to finish fourth ahead of polesitter Ryan Davis who ended up fifth.

Stryker, Ohio’s Kolin Schilt led the Dominator super stock A Main from flag to flag after starting on the outside of the front row. One caution would slow the race early, but William ‘Bubba’ Cundick could not take advantage and settled for a second-place finish. Derrick Roseman started on the pole and ended up finishing third. Scott Hammer slipped back outside the top 10 on the first lap and recovered for a fourth-place finish ahead of Adam Noonan who ended up fifth after starting 12th.

The compact A Main was the only feature event of the night to run caution-free. Eric Carr dove to the inside of Jeff Goodman and Ryan Okuley to battle three-wide for the lead at the conclusion of the first lap, but Okuley would come out on top of that early battle. Carr regrouped and closed back in on Okuley and took the lead away a short time later. The two-time defending track champion out of Wauseon, Ohio, navigated through heavy lapped traffic enroute to take the checkered flag. Okuley settled for second with Brett Ireland, Jason Deshler and Joe Carr rounding out the rest of the top five.

Dan Dippman opened up a big lead early in the Dominator super stock B Main. A couple mid race cautions tightened the field and John Lonabarger began to pressure Dippman for the race lead. Garry Domoe started deep in the field and moved passed Lonabarger and then Dippman to take the race lead with two laps remaining. He would go on to pick up the victory. Lonabarger got by Dippman to finish second. Eddie Goins finished fourth with Derek Zuver fifth.

The compact B Main would cap off the first night of racing at Oakshade in 2022. Jack Bailey held the early lead and Brandon Proffitt out of Adrian, Michigan got by Bailey, but the yellow flag flew for a lapped car after it made contact with Bailey. This turned the lead back over to Bailey, but it was only a short reprieve. Proffitt would get back around Bailey and take the checkered flag. Bailey held on to finish second with Chris Yockum, Shelby Hulbert and Maria Wells the rest of the top five finishers.

Oakshade Raceway will return to racing action on Saturday, June 4 with the Dirt Track Truck Series only visit of the year to the 3/8 mile dirt oval. The DIRTcar UMP Late Models, sportsman and Dominator super stocks will also be back in action. The compact class will have the night off. Gates open at 4pm with hot laps/qualifying at 6pm and racing at 7pm. 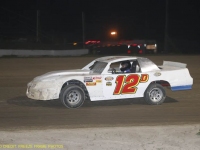 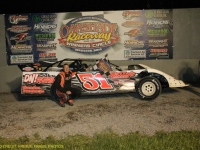 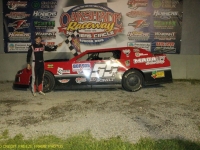 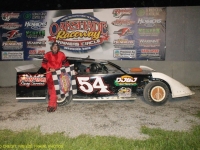 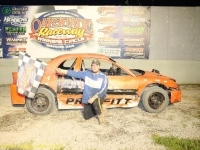 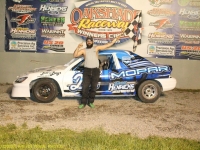