The American Ethanol Modified Tour (AEMT) made their only stop in Ohio at Oakshade Raceway Saturday night and put on a great show with Jacob Poel earning an exciting 30-lap main event victory.

Poel, from Spring Lake, Michigan added to his AEMT point lead with his fifth feature win of the season. At the start, it was David Mielke showing the way early with Brian Ruhlman putting on the early pressure with Poel lurking in third. Things got real exciting on lap 20 when Ruhlman got by to take the lead, but Mielke fought back and reclaimed the lead one lap later. All this was going on in some heavy lapped traffic when Poel jumped up out to the high side and got by both Ruhlman and Mielke in an incredible three-wide move while navigating around lapped cars and went on to pick up the win. Finishing second behind Poel was Mielke with Ruhlman slipping back to finish third.

Rusty Smith, who is second in UMP Sportsman points, started on the pole of the UMP Sportsman feature and took the early lead in an effort to try to tighten up the point standings. Mathew Chapman played spoiler and took the lead after making a pass on the high side. Rich Ruff out of Adrian, Michigan, got by Chapman at the halfway point of the 20-lap race and went on to claim his first feature win of the season. Smith got back by Chapman to finish second. Mike Jessen finished fourth behind Chapman and last week’s feature winner, B.J. Gregory finished fifth. Drew Smith finished sixth and although Rusty Smith gained some ground, Drew still maintains a health 60 point advantage heading in to next week’s Season Championships.

Season Championship Night is shaping up to be a nail biter for the Bombers class at Oakshade Raceway with point leader Jeff Foks Jr. having an off night which allowed Tim Hancock to cut his advantage to just 16 points. Oregon, Ohio’s Craig Dippman started on the pole and drove off to his second Bomber A Main win in the last three weeks. Chris Henry took second and Hancock was third after getting caught up in a hard crash the week before. Donovan Paskan and Rich Riffe were the rest of the top five finishers.

The tightest point battle that will be settled next weekend is in the Compacts. Brogan Rehklau from Waldron, Michigan, took another chunk out of Jeff Foks Sr.’s point lead after picking up his 11th feature win of the year. Cameron Tusing posted a strong second place finish with Jeff Foks Sr. third. Jason Deshler, who still has an outside shot at the points championship, finished fourth and Nathan Goodman was fifth. With one week of points racing left, Jeff Foks Sr. will attempt to nurse a six point lead over Brogan Rehklau.

A wild and crazy Bomber B Main capped off a great night of racing at Oakshade Raceway. Chris Bleikamp took a nasty tumble, rolling his car a couple times over in turn one after contact with Brianna Ruby which brought out the red flag. A little later in the race, Rob Price and Cody Stetten were duking it out for the lead when they got together and a huge melee ensued in turns three and four involving most of the top ten drivers. After the dust settled, Defiance, Ohio’s Scott Robertson found himself with the lead with just a few laps to go and he was able to hold off Scott Hammer to pick up his second B Main win of the year. Finishing third behind Hammer was Dustin Willier. Brianna Ruby ended up fourth and Rob Price recovered to finish fifth. 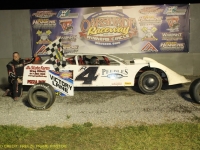 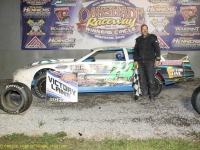 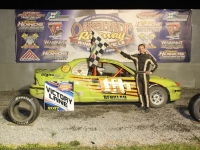 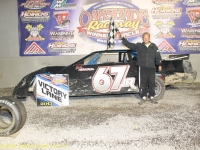 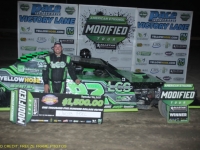