Forty-one American Late Model Series (ALMS) drivers showed up for the final ALMS event of the season at Oakshade Raceway on Saturday night. The current ALMS point-leader, Jon Henry, came out on top, earning his second ALMS win of the weekend.

A huge seven-car pile up, that took out Oakshade point leader Devin Shiels, slowed things down after completing the first lap of the 30-lap ALMS main event. Ada, Ohio’s Jon Henry started on the pole and led the first handful of laps, but Steve Kester hounded Henry and finally took the lead on lap seven. Kester then opened up his advantage over Henry until the unthinkable happened on lap 15. Kester spun while working through lapped traffic which brought out the yellow flag, forcing him to restart at the back of the field. Last week’s feature winner Rusty Schlenk inherited the lead for the restart and Henry, who had slipped back to third, found himself back in second and starting alongside Schlenk for the double file restart. Henry took advantage and jumped back out to the lead from the high side over Schlenk. Schlenk tried to battle back on the inside, but after a few laps of side by side racing, he slipped back. Schlenk had one last shot at Henry after a late caution flag flew with just three laps remaining. After winning the night before at Attica Raceway Park, Henry was able to hang on and pick up his 12th career ALMS win. Schlenk ended up second with Matt Miller finishing third. Brian Ruhlman made up some ground in the Oakshade Raceway point standings with a fourth place finish after Shiels’ early exit from the race. Casey Noonan ended up fifth.

Swanton, Ohio’s BJ Gregory has been on a tear the past few weeks at Oakshade Raceway, picking up his third straight UMP Sportsman feature win. Gregory started inside the second row and took over the lead by lap four. Mathew Chapman got by Joel Morton for second on lap eleven and a caution on lap 14 tightened up the field one last time behind the race leader. Unfortunately for everyone else, Gregory was able to pull away once again after the restart to sew up his third consecutive feature win. Chapman settled for second followed by Mike Jessen, Joel Morton and current Sportsman point leader Drew Smith.

Craig Dippman appeared to be on his way to earning his second Bomber A Main victory after leading much of the race. Jeff Foks Jr. from Holland, Ohio, had other plans and took over the race lead with six laps remaining and went on to his third Bomber A Main win of the year which increases his points lead to 36 over Tim Hancock with only two weeks of points racing remaining. Dippman held off Rich Riffe for a second place finish with Chris Henry moving up 14 positions to finish fourth. Roscoe Stetten was fifth.

The Compact class at Oakshade Raceway has a great point battle heading into the final couple of weeks of competition. Brogan Rehklau went on to pick up his 10th feature win of the season after battling with Nathan Goodman early in the race. With the win, the Waldron, Michigan, driver closed to within 18 points on Jeff Foks Sr. who ended up finishing second in the race. Jason Deshler finished third and currently sits third in points, 79 behind Foks.

Scott Robertson led the majority of the night’s final event, the Bomber B Main, but his night would end prematurely on the hook. Robertson seemed to have something go wrong with his car and ended up off turn four on lap nine of the 12 lap race. Robertson was towed back to the pits ending his night. That turned the race lead over to Holland, Ohio’s Gabe Mueller who went on to pick up his first feature win of the year after starting deep in the field. Cody Stetten finished second followed by Zach Stotz, Dustin Willier and Mike Villena.

The American Ethanol Modified Tour makes a stop at Oakshade Raceway on Saturday, September 9th. UMP Sportsman, Bombers and Compacts will also be in action with gates opening at 4pm, hot laps at 6pm and racing at 7pm. 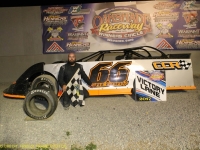 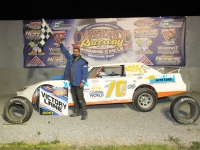 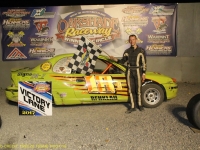 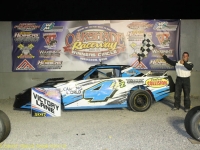 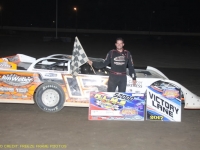