WAUSEON, OH – For the third week in a row, Oakshade Raceway ran a full racing program without a grandstand crowd due to health department’s restrictions because of Covid-19. Fans missed out seeing some intense action that included defending track champion Devin Shiels getting turned up on his lid in his heat race and Adrian, Michigan’s Jake Rendel earning his very first UMP Late Model feature at Oakshade.

At the start of the 25-lap UMP Late Model feature, pole-sitter Michael Archar battled three-wide with Mike Bores and Casey Noonan. Jake Rendel started fifth and worked his way past those three drivers to take over the race lead on lap three. Archer and Noonan battled for second with Noonan finally getting the position. Noonan was able to put a little pressure on Rendel for the lead before losing ground to Rendel later in the race. Rendel pulled out to a big lead by the finish for his first-ever UMP Late Model victory at Oakshade which also vaulted him to the top of the point standings after three consecutive top five finishes. Noonan finished second followed by Bores and Archer. Ken Hahn rounded out the top five finishers.

Joel Morton’s crew worked hard to replace a radiator after his heat race that led to him starting on the pole of the UMP Sportsman feature. Morton darted out to a big lead over the previous two week’s feature winner, Rusty Smith. Smith, out of Sylvania, Ohio, was able to get to the inside of Morton after a lap 11 restart, but Morton powered away until he spun by himself in turn two. That turned the lead over to Smith who went on to his third consecutive feature win. Karl Spoores was running second, but slipped up in the closing laps which allowed Josh Robertson to take over the position. Spoores battled back on the final lap to take the second finishing position with Robertson settling for third. Bruce Stuart finished fourth and Scott Robertson moved up from his tenth starting position to end up fifth.

Forest, Ohio’s Jordan Conover was back for the second consecutive week with something to prove. After crossing the finish line first by a nose in the Bomber A Main last week, he failed post-race inspection handing that win to Kolin Schilt. This week, Conover started ninth and worked his way up to take the lead from Jeff Hinkley on lap five. From there, Conover cruised to the victory with Hinkley hanging on to second. Gabe Mueller finished third followed by Gregg DeTray and Rich Riffe.

Eric Carr took the early lead of the Compact feature event, but fell off the pace a handful of laps in. That turned the lead over to Kaleb Hinckley out of Angola, Indiana. Hinkley was able to hold off a challenge from Gage Allen to pick up the checkered flag. Cory Gumm finished third with Mark Barrick fourth. Last week’s feature winner, Cameron Tusing, ended up fifth which was good enough to keep him on top of the Compact point standings.

The final race of the night, the Bomber B Main featured few lead changes and a red flag after one car took out a light pole a couple laps from the finish. It was Dave McMannamy who jumped out the lead at the drop of the green flag after starting on the outside of the front row. Shane Estes then took command a lap later. Oregon, Ohio’s Craig Dippman made a three-wide move to take the lead mid way through the race and went on to take the checkered flag after starting at the tail of the field. Ronnie Bloomfield also started at the tail and ended up finishing second with Estes slipping back to third. John Lonabarger and Scott Hammer were the rest of the top five finishers.

The annual Barney Oldfield Race is slated for this Saturday, June 20 depending on what restrictions are in place for that evening by the health department. Please follow Oakshade Raceway social media or web site at oakshaderaceway.com for the latest information on this event. 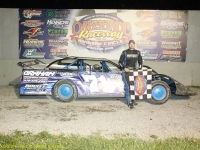 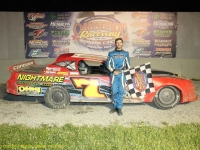 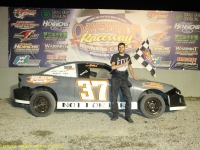 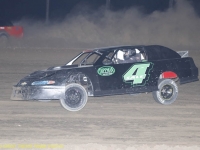 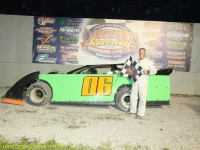