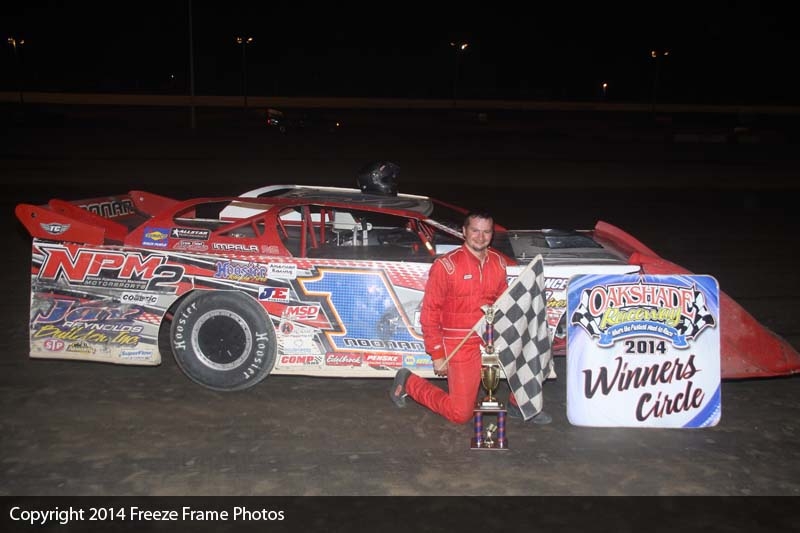 Noonan from Sylvania, Ohio started on the pole of the 30-lap UMP Late Model Season Championship feature event and drove out to a big lead early. An incident involving Steve Kester and Chris Keller brought out the first caution on lap seven. Championship contender Brian Ruhlman, who started the feature 18 points in arrears to Schlenk, moved into second place on the track after the restart. A hard crash between Dusty Moore and Josh Haynes brought out the only other caution on lap eight. After that, it was smooth sailing for Noonan who cruised to another feature victory. The battle for second between Schlenk and Ruhlman was the one to watch. Both drivers raced hard and continued swapping positions. In the end, Schlenk took second and unofficially the $7,500 2014 Oakshade Raceway Championship. Ruhlman finished third in the race and second in points which will earn him a new Rocket Chassis. Keller recovered nicely after restarting at the tail following the first caution on lap seven to finish fourth. Devin Shiels was fifth.

Joe Derbeck out of Lambertville, Michigan started on the pole and opened up a big lead in the UMP Sportsman feature race. His lead was wiped out after Christopher Whitlock spun on lap six to bring out the caution flag. Bruce Stuart took the lead from Derbeck just after the restart and had an epic battle for the lead with Monclova, Ohio’s Tim Line for about 10 laps. No one had been able to snap Line’s string of consecutive feature wins that dated back to the end of June. Stuart and Line raced side by side with Line looking high and low trying to find a way to get by Stuart. Finally, Line took a stab to the inside of Stuart as both drivers dove low into turn three. Stuart lost the rear end and spun, collecting Jamie Grochowski in the process and ending both drivers’ night. Line took over the lead with three laps remaining and went on to post his 11th UMP Sportsman feature win of the year. Derbeck wound up second with Mike Jessen third. Rich Ruff moved up from his 11th place starting position to finish fourth. Billy Brown was fifth.

Jeff Foks out of Holland, Ohio increased his point lead in the Bomber class with his ninth Bomber A Main win of the year after leading the entire distance. Chris Sands who is second in points, finished second in the race. Sands tried to reel Foks in late in the race, but without the aid of caution flags he was unable to get within striking distance. Rick Dixon capped off a decent night with a third place finish followed by Mathew Chapman and Craig Dippman.

Cory Gumm had a bit of a wild ride in the Best Performance Motorsports Compacts feature event bringing out the red flag when he rolled over on the backstretch after contact with last week’s feature winner, Aaron Barrick. John Martis from Toledo, Ohio finally found his way back to victory circle after a bit of a dry spell. His last feature win was just over a month ago, but he took command at the drop of the green flag. Brandon Myers started deep in the field and was able to work his way to second. He was able to pressure Martis for the lead, but could not find a way around and ended up finishing in the runner up position. Barrick, finished third followed by Cody Stetten, and Cole Walbolt.

Ethan Gehring started third in the Bomber B Main and was able to get by Tim Hancock and Derek Morris to earn his first feature win of the season. Hancock started on the pole and ended up second with Morris third. Angola, Indiana’s Jeff Hinkley finished fourth after starting 11th and Duane Fletcher was fifth.

The final race of the night was the Bomber C Main which brought another new face to victory lane. Chuck Stuckey from Sylvania, Ohio started sixth and finished ahead of Pete Herman to pick up his first feature win of the year. Herman started way back in ninth and settled for a second place finish. Kyle Light was third followed by Taylor Dippman and Dylan Hough.

Oakshade Raceway will host its final American Late Model Series (ALMS) presented by Sunoco event Labor Day weekend. Gates will open at 4pm with racing starting at 7pm. In addition to the $2,000 to win ALMS, the UMP Sportsman, Bomber and Best Performance Motorsports Compact classes will also be in action. 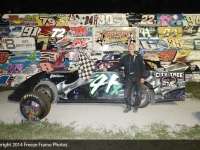 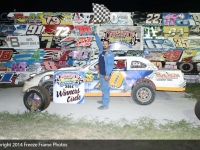 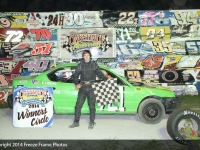 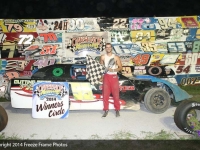 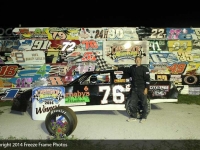 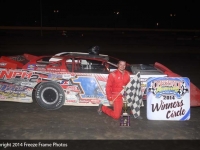